A lush weed-free expanse of green lawn may not be top of everyone’s gardening wish list, but it sure comes close!

There is a sense of achievement when the grass has been mown, the edges trimmed and unsightly weeds removed. Of all those tasks, getting rid of weeds in the lawn seems to be the most troublesome and time consuming.

What are lawn weeds

When we refer to lawn weeds we’re most often talking about broadleaf invaders – plants like dandelions, plantains and thistles that our early settlers brought with them from the old country to make them feel more at home in this inhospitable land.

However, broadleaf plants are not the only lawn weeds. Some grasses are also invasive and tend to be weedy, like winter grass and paspalum. Eradiating a pest grass in a lawn isn’t all that simple, because some of the products used to kill them may also harm popular lawn grasses like buffalo, for example. If you have a winter grass or paspalum problem, it’s best to talk to a turf specialist to see what they recommend that won’t damage your lawn.

An infestation of clover in a lawn is often indicative of a lawn in need of attention. Clover thrives in soils which are low in nitrogen as a result of infrequent or inadequate fertilising.

Common clover is the white flowered Trifolium repens, tri meaning three and folium leaf – three-leafed clover, although if you look hard enough you may find a four-leafed one occasionally! Pink and red clovers may also appear in lawns from time to time.

Growing vigorously from late autumn into winter, clover should be treated with a selective herbicide in mid to late winter, before it flowers. It may take two applications 6-8 weeks apart to gain effective control. Mowing to remove flowers before they set seed will also assist in reducing carryover from one year to the next.

A small-leafed perennial weed, creeping oxalis or creeping wood sorrel (Oxalis corniculata) is highly invasive and can spread through a lawn very quickly. It is often well-entrenched before it’s even noticed because it can ‘creep’ under the cover of grasses, putting down roots as it spreads. It is most often discovered when in flower. Its leaves are mostly light green but under some conditions, they may turn burgundy. 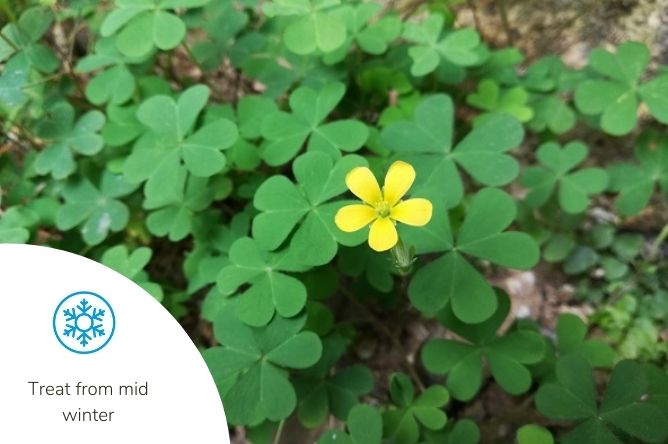 While creeping oxalis seems easy to pull out, each small segment or leaf left behind will root and continue the spread. It thrives over winter and flowers in early to mid spring. It may take two or three applications of a selective lawn weeder from mid winter into spring to eradicate it. It is essential to control creeping oxalis before flowering and setting seed.

The blight of bare feet on the grass in summer, bindii (Soliva sessilis) is a widespread weed known for its quite tiny but very sharp-needled seeds or burrs. It has small feathery foliage and looks similar to parsley but in miniature.

Bindii grows and flowers over autumn and winter, going to seed over spring and summer when outdoor activities are at their peak. The burrs may be spread by water but more often by pets and humans. 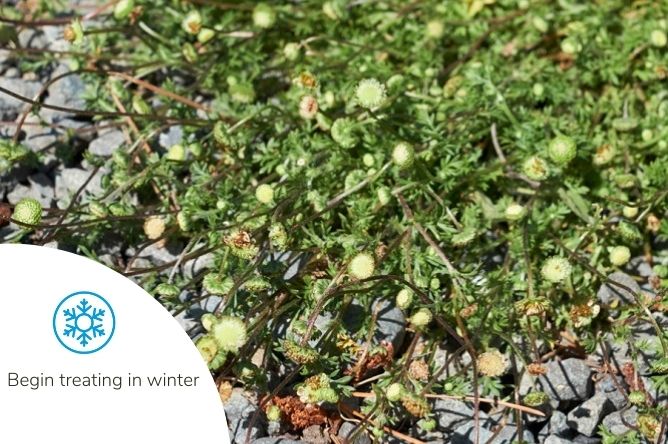 While bindii are fairly easily pulled out, the use of a selective herbicide formulated to effectively control bindii before it has the chance to flower and produce burrs is essential. The first spray should be in winter, as soon as the first young plants are seen. Two or possibly three repeat applications at six weekly intervals from the first should give you the upper hand before summer. Keeping your lawn well fertilised and healthy is the best defence against bindii.

While children may love picking the yellow and black daisy flowers of capeweed (Arctotheca calendula) to make daisy chains, lawn lovers everywhere dislike it intensely. Vigorous and invasive, the plants have deep roots and are difficult to pull out and they set copious amounts of seed if allowed to flower. 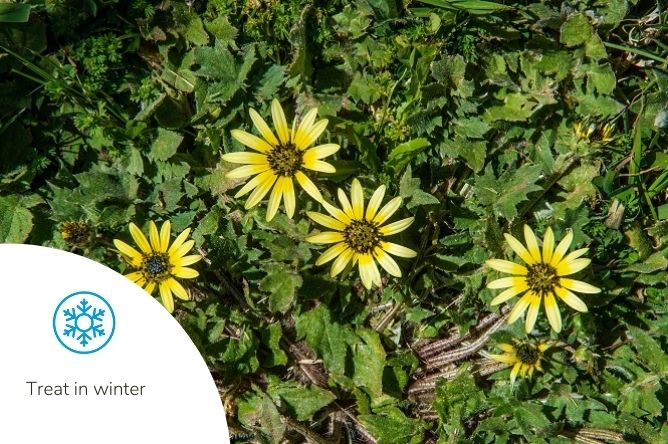 Capeweed is closely related to the sunflower. It thrives in poorly maintained lawns, so one key to eradication is to ensure your lawn is well fed and watered and without bare patches where this weed can gain a toe-hold.

Capeweed seeds germinate in autumn and the weed thrives over the winter months, flowering in early spring. Two treatments six weeks apart with a selective lawn weeder over winter should control it. Controling capeweed before it seeds is imperative for good control.

A soft leafed plant with tiny white flowers that thrives in mostly cooler climates, chickweed (Stellaria media) can be quite invasive in garden beds and lawns throughout winter. Despite its weedy reputation and ability to smother other plants, it is also edible - the flowers and leaves can be eaten raw or cooked. 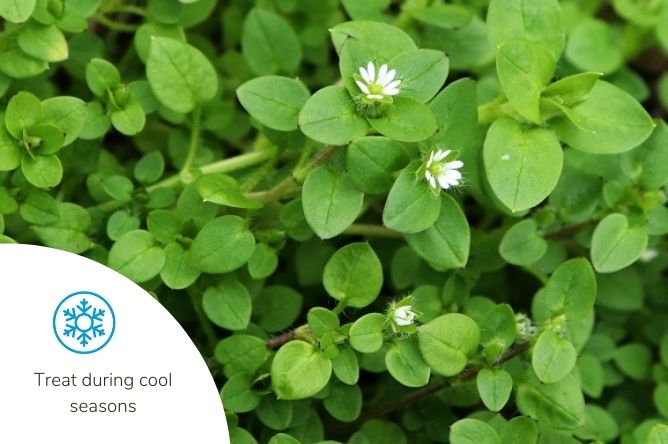 Chickweed is a “cool season” weed, rarely found once temperatures start to warm up in spring, so it’s important to eradicate it before it sets seed for carryover to the following year.

Great handfuls of chickweed can be pulled off lawns and garden beds, but it is essential to make sure the roots come out too, otherwise it will quickly re-sprout. Another weed that takes advantage of lawns in poor condition, it is easily controlled by lawn weeder products applied when the weed is actively growing but your best defence is to keep the lawn well fed and mown.

One of the true broadleaf, flat weeds that is a major pest in lawns, cudweed (Gnaphalium sphaericum) is prevalent in winter lawns, when it grows vigorously and out-competes most lawn grasses. Cudweed starts with one rosette-like plant with smooth green leaves (white on the underside) but quickly develops into an expansive group that can smother out extensive areas of lawn.

Like most other weeds, it’s important to gain the upper hand in winter, before plants flower in spring and then set seed. Hand removal using a pronged lawn weeder tool is quite effective. Selective broadleaf lawn weeder products will also control it, although it may take two applications 6-8 weeks apart.

Common dandelion (Taraxacum officinale) is most probably one of the best known of all weeds, in the lawn and in the garden too. It’s a flat weed that produces yellow daisy-like flowers and round balls of tiny seeds each with its own very light ‘parachute’ that allows it to be blown on air currents for literally hundreds of kilometres. One of its best known attributes is the white, milky sap its flower stems and leaves exude when broken. 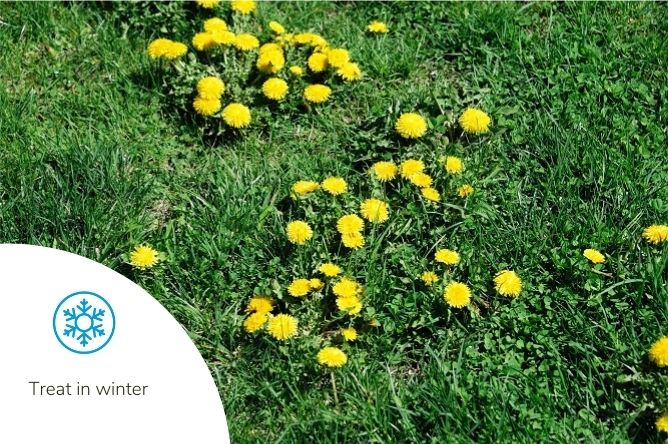 Possessing a sturdy taproot and growing in a flat rosette, the dandelion is invasive, smothers lawn grasses and thrives over most climate zones. While it is most active in winter and its main flowering is in early spring, dandelion will flourish at almost any time of the year, often during even the harshest of conditions. Controlling dandelions before it produces its fluff-ball seed heads is vital. It can be removed with a pronged lawn tool (make sure to remove the taproot entirely or it will regrow) or with a lawn weeder.

Docks and sorrels (Rumex spp) are members of the buckwheat family and edible. They are, however, also widespread weeds and problematic in lawns over many parts of Australia. They have deep tap roots and fleshy, sometimes leathery leaves growing in a loose rosette pattern. In a garden setting they flower and produce abundant seeds but generally in a lawn, regular mowing will minimise flowering. 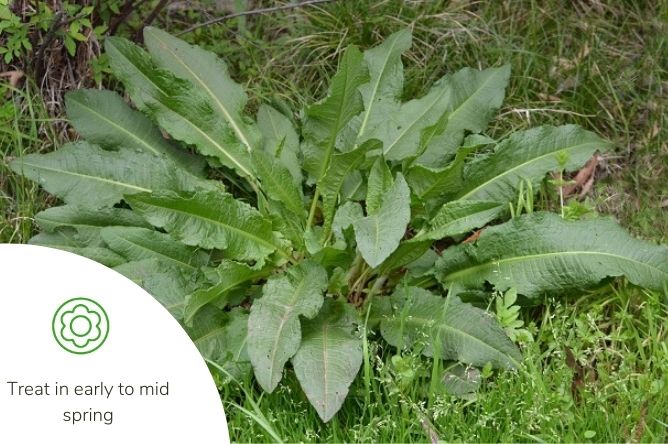 Like most broadleaf weeds, docks will smother lawn grasses, leaving unsightly bare patches when they are either dug out or killed. They flourish over winter when lawn growth is generally slow and flower in spring and early summer. They can be controlled with one or two applications of a selective herbicide in early to mid spring before they set seeds.

Fleabane (Conyza spp syn Erigeron spp) is a grey-green to dark green, rosette forming weed that, in the lawn, remains quite flat due to regular foot traffic and mowing. In open ground, however, it can grow quite tall and will produce small daisy-like flowers followed by heads of seeds similar to those of the dandelion but smaller and somewhat denser. 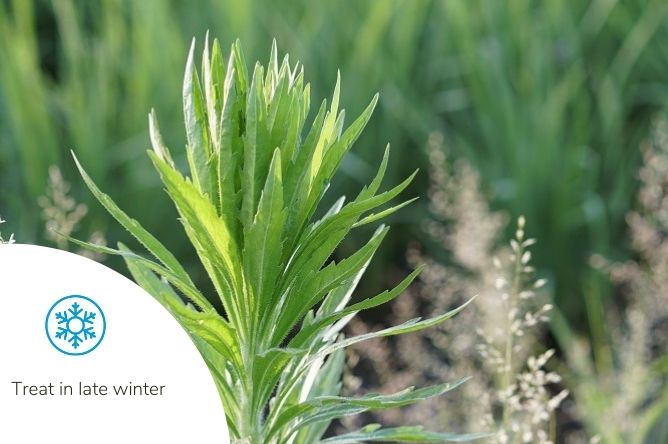 It can be quite hard to control because has tough, woody stems and spreading roots. Like other flat weeds, if allowed to develop into colonies, it will smother large areas of grass. Because it is common on waste lands and its seeds are airborne, it can be quite invasive.

Fleabane grows strongly over the winter months then flowers and seeds from mid spring right through to autumn. Like all lawn weeds, the best time to apply a lawn weeder is while plants are actively growing in late winter but before they start to produce flowers.

Lamb’s tongue or plantain (Plantago lanceolata) has elongated leaves with parallel veins and very distinctive tall flower and seed spikes. The plant forms one or more rosettes which, in a lawn that is mown regularly or has a lot of foot traffic, will be quite flat. It is one of the most common lawn weeds in Australia, occurring over most climates and regions but is perhaps worse in coastal areas with a temperate climate.

Lamb’s tongue grows over winter, seeds freely in spring and summer and spreads rapidly but is reasonably easy to eradicate in late winter using lawn weeder products. A follow-up application may be needed for complete control.

As its name suggests, wireweed (Polygonum aviculare, P heterophylla) is a low growing, sprawling weed with thin, wiry stems that often is so congested it looks like a tangle – hence its other common name, knotweed. It a long fibrous taproot and small, grey-green leaves with a sheath of white or purple around the base of each. It bears small clusters of white to pink flowers.

Wireweed seeds germinate in spring and summer, so effective control with a selective herbicide is best when plants are actively growing over late spring into summer – before it has the chance to set seeds.

Wireweed thrives in poor soils and occurs in neglected lawns in many parts of the country. While it is not often seen in lush urban gardens, it is considered an environmental weed of national significance. Wireweed can be difficult to control, sometimes needing more than one treatment.

So there you have it – 11 of the most common lawn weeds to invade Australian gardens. Most are persistent but can be eradicated completely with the right treatment and perseverance.

Lawn Builder Weed, Feed & Green Up is a ‘2 in 1’ product designed to make lawn care as simple and fuss-free as possible...

Did you know… not all Weed & Feed products can be used on all lawns*? Most of the herbicides which are available to kill...

Fertilising to create the perfect lawn

How to create the perfect lawn made easy with Scotts Lawn Builder range of slow-release lawn fertilisers.

The Aussie homeowner’s guide to a lush green lawn

Our products
Explore our products and find what's right for you
Discover our products
Where to buy our products
Search for a store near you.
Find a store
What to do this month
Find hands-on guidance for what to plant and when.
Explore the garden calendar
Compost and Mulch Calculator
Find out how much you need for your garden.
Calculate now
Our Newsletter