Many of us assume that because we simply don’t see many squirrels around in the coldest winter months that they must be hibernating, much like other common mammals such as dormice or bats.

But in fact one of the many surprising facts about squirrels is that neither the common grey squirrel (formally known as the Sciurus caroliniensis) or the lesser seen but indigenous red squirrel (the Sciurus vulgaris) are physically unable to hibernate, not least because they are unable to retain enough body fat to survive. That makes sense if you think how agile a squirrel needs to be as it leaps from branch to branch and scurries up and down trees. So in short - squirrels do not hibernate.

Two types of squirrel live in the UK

The grey squirrel is much more common and was introduced into Britain in the late 19th to early 20th century from America. At approximately 18 to 20 inches in length they are easily distinguishable from the red squirrel by their size and distinctive grey / brown colour. Half their body length is made up of their tail and the grey squirrel can live up to 20 years although in the wild it’s usually much less because of their many predators and often challenging living conditions (such as being near our busy roads)

It’s rare to spot a red squirrel in most parts of England today as unfortunately they’ve been largely displaced by the grey. If you are lucky enough to see one they are instantly recognisable by their red coat and tufty ears, and they are considerably smaller than their grey counterpart (7 to 9 inches).

Where do squirrels live?

Squirrels are den builders and they’ll build themselves a den (or a ‘drey’ as it’s also known) out of twigs and branches in the fork or hollow of a tree or even in an attic or barn if the opportunity arises. Like us, they’re not mad keen on the cold so in the winter they make sure their den is particularly warm and snug. On the whole they nest alone unless they have young and then they can be territorial. If winter conditions turn severe they will snuggle into the den together for additional warmth. The popular belief that squirrels hibernate is largely because they spend a lot of time in this den. Whilst the squirrel goes to this effort to prepare the den it still does not hibernate in it.

If squirrels aren’t hibernating, how do they survive during winter?

During the warmer months you can’t fail to notice the frenetic activities of your local squirrels as they busy themselves foraging and collecting nuts and seeds. The grey squirrel in particular has a very varied diet and over the course of the year they can collect and hoard up to three years’ worth of their food requirements. They grab what they can when they can and quite literally bury it away for a rainy day.

Amazingly, a squirrel can hoard its food in thousands of different locations and can even pretend to be burying their bounty before they hide it elsewhere if they think they are being watched. Then come the winter months, they use a combination of distant and local landmarks and then their sense of smell to locate their food stashes with astonishing accuracy, meaning they have a regular supply of food even when berries and nuts are scarce.

Why don’t we see squirrels during the winter?

Squirrels like many small mammals are ‘crepuscular’ which means they are particularly active for a couple of hours in the early mornings and late afternoons but during the main body of the day can sleep for as much as 18 to 20 hours. And this partly explains why you rarely see squirrels during the day in winter, especially if it’s very cold.

One more amazing fact about squirrels…

Ever tried walking down a tree head first? Probably not, but squirrels are one of the few small mammals that are able to do so by turning their hind feet around so that their back claws are facing upwards and can grip the bark. 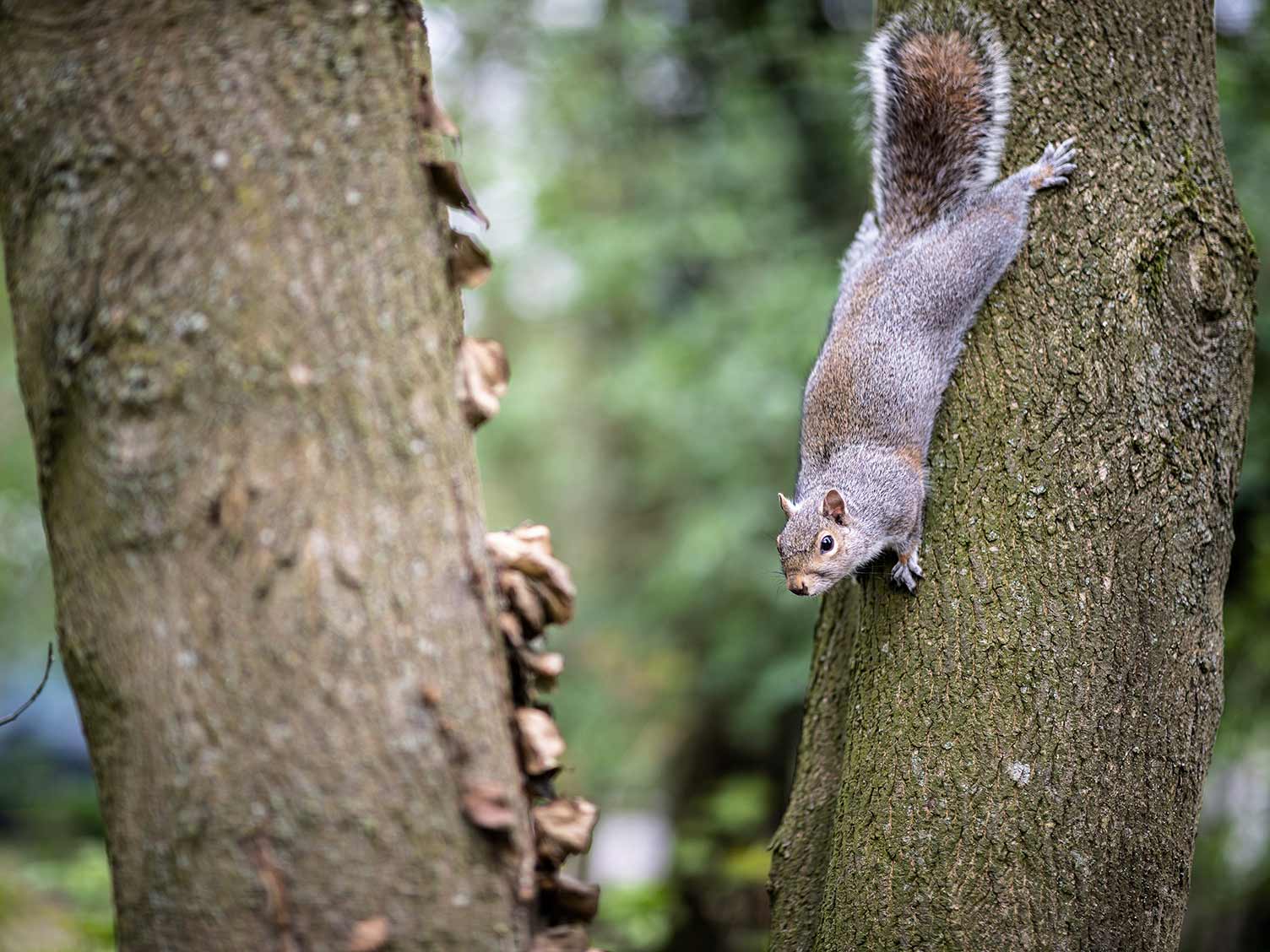 If you’d like to see a squirrel’s behaviour first hand and up close, why not try installing a squirrel feeder and fill it with special squirrel feed outside in your garden. Remember they are wild animals so don’t try to approach them but just enjoy watching their behaviour from a distance. Also, don’t forget to leave enough food out for the birds too.

Although their antics and acrobatics are quaint and great fun to watch, Grey Squirrels can cause severe damage to...

Moles can cause serious damage to lawns, as well as flower beds and borders.

Foxes are now common visitors to both rural and urban gardens, where they scavenge for food. They are more of a nuisance...