Potting mix is the essential growing medium for plants in pots. It provides everything they need grow, flower and fruit to the best of their ability.

Potting mix is a man-made soil substitute that is used to:

That old saying that "oils ain't just oils" applies equally to potting mixes. When it comes to growing superior quality plants in often expensive pots, why skimp on the cost of the potting mix? Cheap potting mixes will not produce the results you expect and they will not last.

It is well worth the extra few dollars to buy the best premium quality mix you can. We're talking just a few dollars here - maybe only $4 extra a bag - but it will be money very well spent.

✗ Is often made from uncomposted wood shavings or sawdust and sand.

✗ Has no texture, no structure and only minimal nutritional value.

✗ May be very acidic (low pH unsuitable for many plants).

✗ Does not include controlled release fertiliser.

✗ Compacts or 'slumps' in pots within a few months.

✗ Does not contain wetting agent or water-storing crystals so is difficult to re-wet if it dries out.

✗ Does not comply with the relevant Australia Standard for growing media.

✔ Is made from quality raw materials.

✔ Lasts for up to two years without compacting ('slumping').

✔ Is thoroughly composted to eradicate weeds, pests and diseases.

✔ Has good structure and texture, with air porosity that allows roots to take up oxygen (essential).

✔ May include a 'bio stimulant' to give plants added strength and vigour.

What's in our quality potting mixes?

Australian potting mixes are rated as among the best in the world because most of the well-known brands like Scotts Osmocote and Debco are manufactured from the best quality raw materials we can source and the finished products comply with the Australian Standard.

Our superior and premium potting mixes are made from:

Some mixes may also include perlite* or vermiculite** to make them lighter - ideal for very large tubs, vertical gardens or rooftop situations where the weight of pots, wall hangers and potting mix is a serious consideration.

* Perlite is non-crystalline and occurs naturally. It has the unusual property of greatly expanding when heated and is very light in weight.

** Vermiculite is formed from two natural minerals, biotite and phlogopite, which expand and exfoliate to form a light, flaky material when heated.

Why potting mix, and not soil from the garden?

Some people make the mistake of thinking you can simply dig up a few spades of soil ('dirt') from the garden and use that in a pot. That's not the case!

When growing in the open ground, a plant's roots have the space to grow down deep into the soil as well as extend out from the trunk as far as they want, giving them a huge volume of soil from which to extract food and moisture.

An average sized pot around 180mm in diameter, for example, filled with soil straight out of the garden:

A plant potted in it will not survive for very long.

The same volume of potting mix in the same 180mm pot, on the other hand: 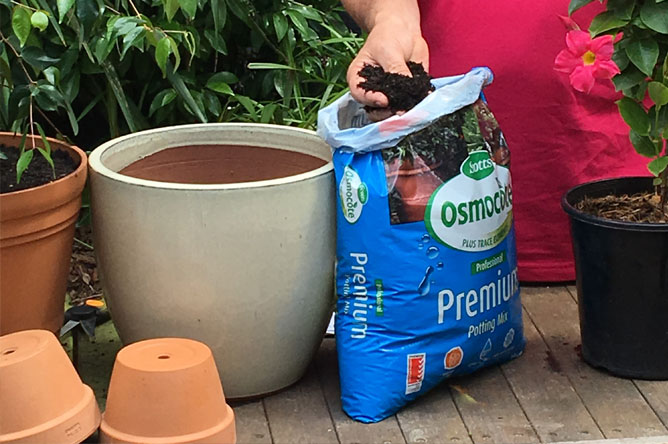 ✔ Has mix of particle sizes that prevents 'caking'.

How is our quality potting mix made?

Composted pine bark is the main ingredient in most quality potting mixes. The bark is a by-product of the plantation timber industry - so it's local (not imported), renewable and sustainable.

Each potting mix variety is then bagged, palletised, wrapped and delivered direct to retail outlets, ensuring that what's in store for you to buy is as fresh as possible.

If you’re looking at growing your own herbs and vegetables in pots or containers, then you need to invest in the best...

6 Steps For Success: How To Repot Your Plants

Whether you're starting a plant collection from scratch, or wanting to move a beloved plant into a new pot, knowing how...

Why is repotting so necessary? Plants growing in pots from very small (50mm diameter) to very large (half wine barrels...

Pots and planters come in all shapes and sizes. They may be: Purely functional Functional as well as decorative Plastic...