Blackberries are sometimes overlooked for growing at home – but they shouldn’t be, as they are easy to grow and produce lots of luscious, tasty and juicy fruit with very little work and care.

Of course, if you don’t want to grow them yourself, you can always go pick them blackberries the wild - but there are lots of great varieties for home growing, which produce good yields of tasty, sweet fruit usually much bigger and sweeter than those of the wild ones found growing in hedgerows and other places.

If you don’t like the thought of having to deal with the sharp thorns, there are thornless varieties, such as Oregon Thornless. This is also very decorative, with deeply cut leaves that turn a rich red colour in autumn.

As well as blackberries, there are also several hybrid and related berries, including loganberries, tayberries, boysenberries and Japanese wineberry.

How to grow blackberries

Blackberries will grow in partial shade as well as full sun. Because they flower late in spring, they can be grown in frosty areas, where other fruit won’t grow particularly well. They need a good, moisture-retentive but well-drained soil with lots of added well-rotted organic matter, such as well-rotted manure, compost or soil conditioner, to hold moisture and nutrients.

Blackberries and hybrid berries are all self-fertile, so you only need to grow one plant and don’t need to worry about cross-pollination. They are vigorous plants, so need to be given plenty of room. Allow around 3m (10ft) between plants.

There are several great varieties to grow, which produce large yields of excellent fruit:

Container-grown blackberries can be planted at any time of year, but autumn to spring are the best times.

Place the roots in the planting hole and adjust the planting depth so that it is planted at the same depth as it was originally growing and the top of the roots are level with the soil surface.

Mix in more organic matter with the excavated soil and fill in the planting hole.

Water in well, apply a granular general feed over the soil around the tree and add a 5-7.5cm (2-3in) deep mulch of well-rotted garden compost or bark chippings around the root area. 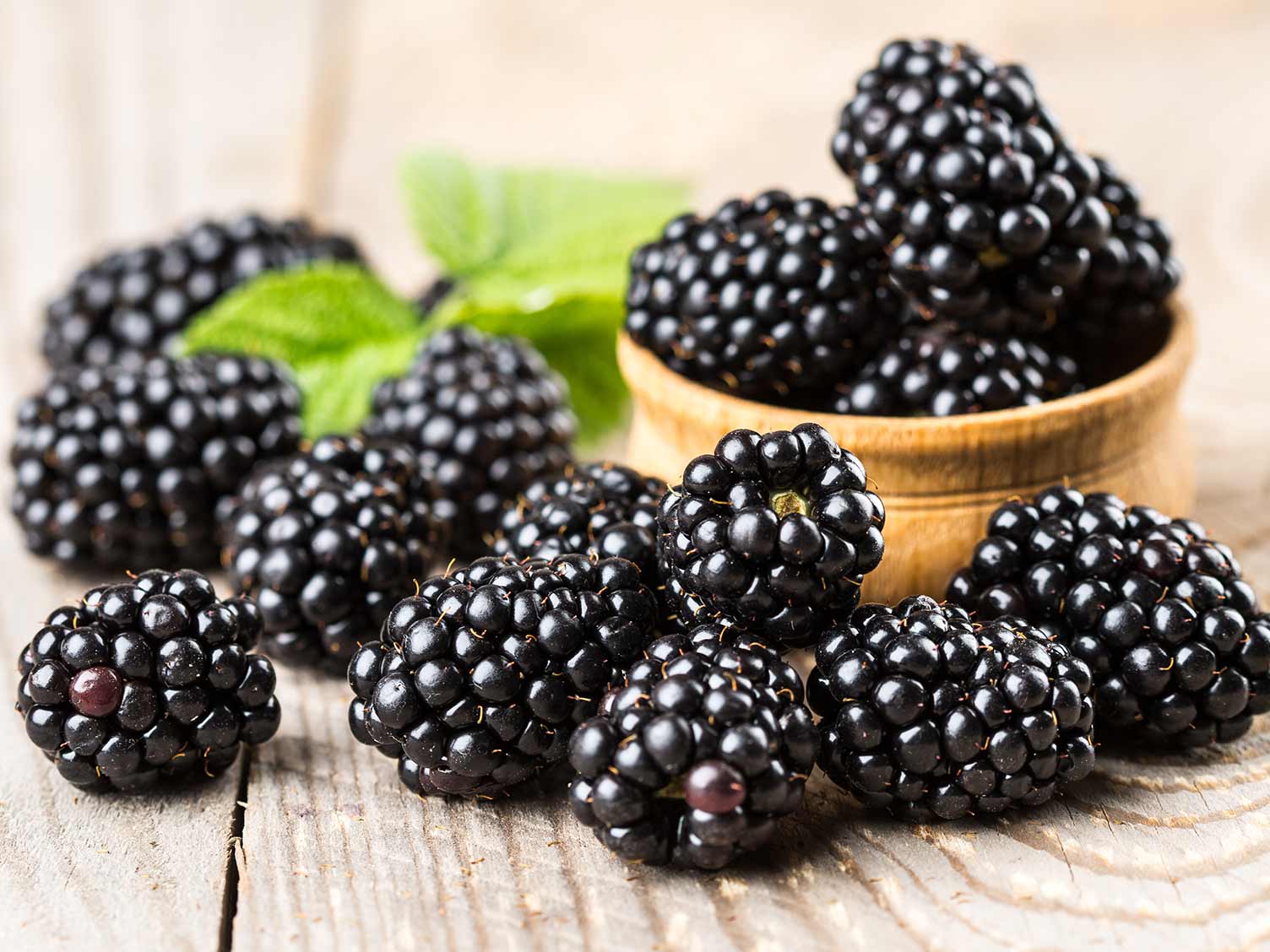 How to care for blackberries

Water well during the first year whenever the weather is dry. In subsequent years, watering when the fruit is swelling may be needed if there are prolonged periods of dry weather.

Mulching around the plants in late spring will help to conserve soil moisture and keep down weeds.

For maximum crops, feed in early March with a general controlled-release feed.

Blackberries need a good support system for the stems. Knock in sturdy 7.5cm (3in) 2.4m (8ft) high posts into the ground and stretch heavy-gauge wires horizontally between the posts at around 75cm (30in) 1.2m (4ft) and 1.5m (5ft) above ground level. Tie the stems to the wires as they grow with soft twine.

Alternatively, they can be trained along wires attached to a fence or even a shed. There are several ways of training the stems. As they fruit on stems produced the previous year, the easiest method is the one-way rope system. The new, current year’s stems are trained out and tied in on one side of the plant, while the stems produced the previous year, and which will carry the fruit, trained out on the other side.

As soon as you finish harvesting, simply cut back the fruited stems down to ground level. Make sure you don't cut out the new/current year's stems as these will produce next year's fruit.

The fruit is ready for picking from mid-summer onwards. Pick it when it has developed a good colour and before it becomes too soft. With thorny varieties, it pays to wear gloves when picking!

The tasty red - or even golden - fruits of raspberries are a great summer favourite in the fruit garden. They grow and...

Bursting with nutrients and flavour, the tasty dark purple to light blue fruit of blueberries are rich in anti-oxidants...

Forget the hard, green bullets you often buy in shops for cooking with, dessert gooseberries have rich, sweet, and juicy...

Juicy strawberries are a temptation for anyone, picked straight from the garden, you know there’s nothing else quite...