Have you spotted a bird of prey near where you live recently? And if you have, were you able to tell which bird it was? Get to know British birds of prey and what they look like with our handy guide.

A bird of prey is a medium to large bird which has a hooked bill, strong sharp talons, excellent eyesight and senses and which hunts small mammals, other birds and insects. It’s understood that birds of prey have been used and worked by man for almost 10,000 years and Genghis Khan is believed to have used them both in battle and to catch food.

Despite many species of our UK birds of prey being driven almost to extinction, due to hunting amongst other things, mammoth efforts over the last 50 years have seen our bird of prey population recovering and with a keen eye, you can spot them in most parts of the UK.

We have a number of different birds of prey and they can be an awesome and inspiring sight as they soar and glide high up in the sky or swoop down with devastating accuracy to catch their prey. You may see them in woodland or above farmland, in scrubland or even in cities or at the side of a busy motorway - and you may well see one hovering above your garden.

With so many different birds, and often only a quick glimpse, they’re not always easy to identify. And although we can’t describe each and all of them in detail here for you, we can give you a helping hand, with our quick guide to some of the most common and different birds of prey that you might spot here in the UK. 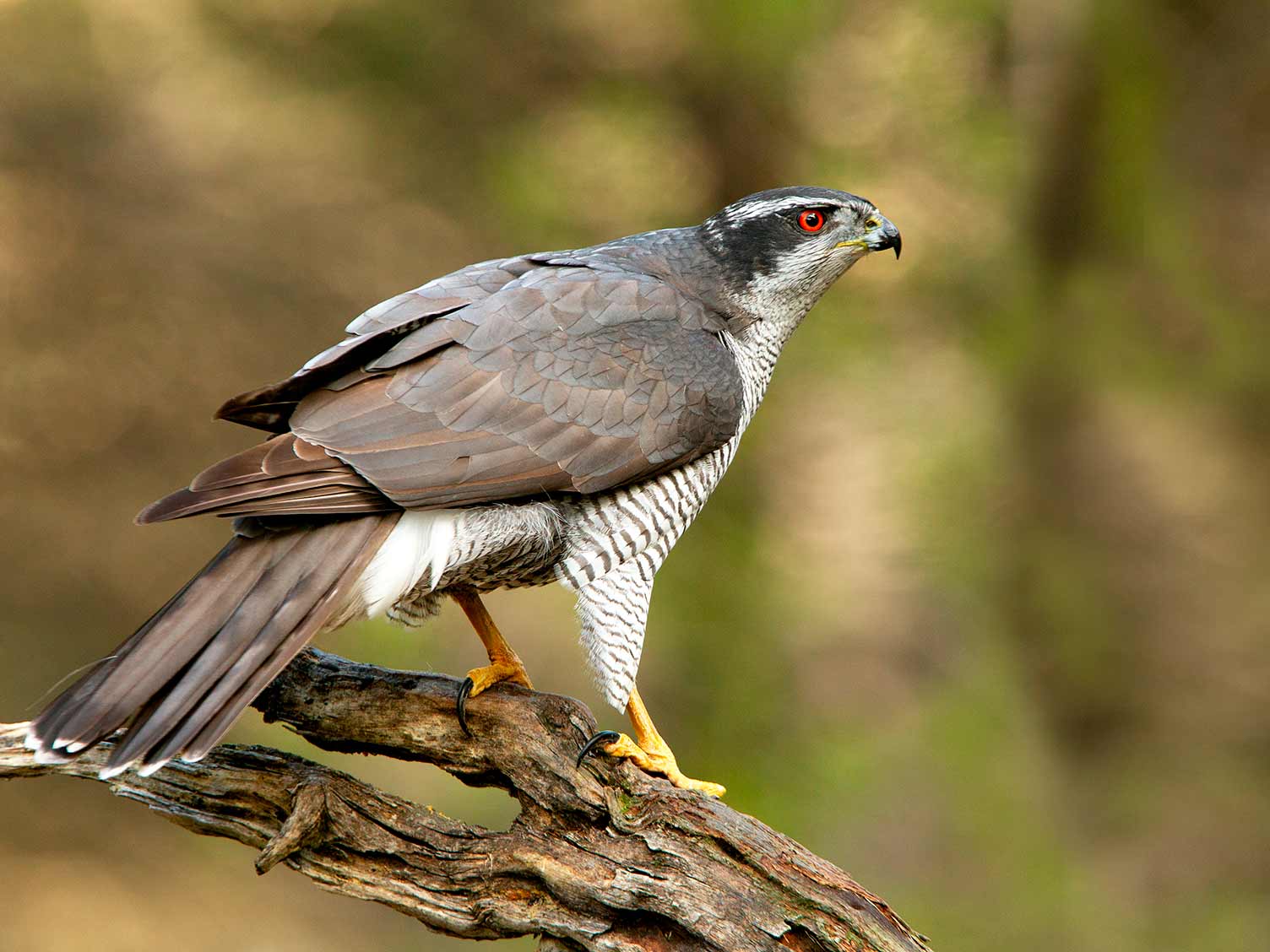 UK hawks vary in size and include the most common: the goshawk, as well as sparrowhawks. The goshawk is the larger of the two and you’ll be able to recognise them by their red eyes and white eyebrows. They’re fast, nimble and agile and you’ll find them in many parts of the UK. 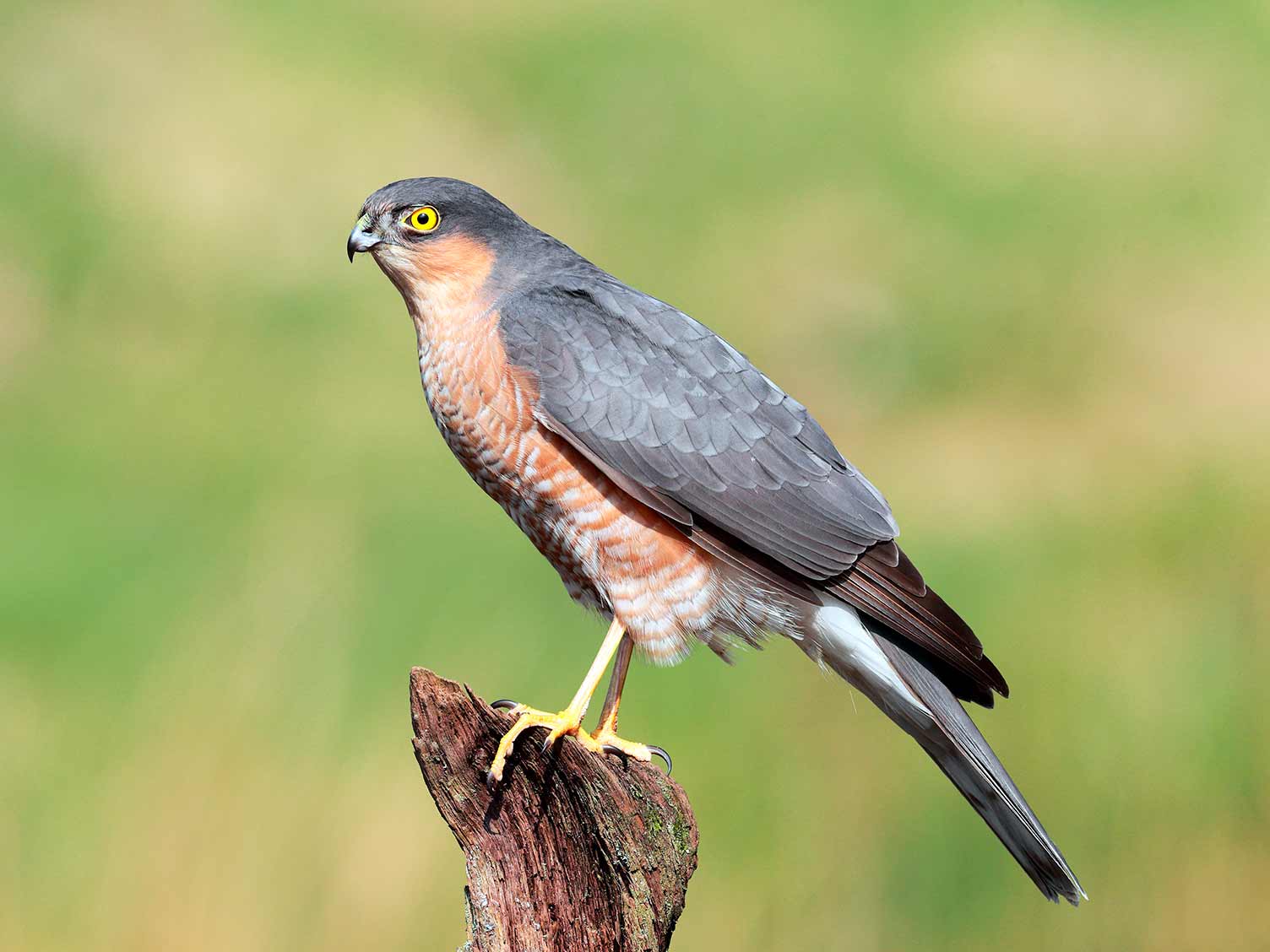 The sparrowhawk is a little smaller and distinguishable by their yellow legs and orange eyes as well as by the fact they have a greyer looking back and an almost striped, white and brown chest. They’re reasonably common in the UK too and can be seen throughout the year.

A species of hawk, known for flying low as they hunt and feed on mammals, reptiles and small birds. Look out for the not so common hen harrier, marsh harrier and Monatgu’s harrier. 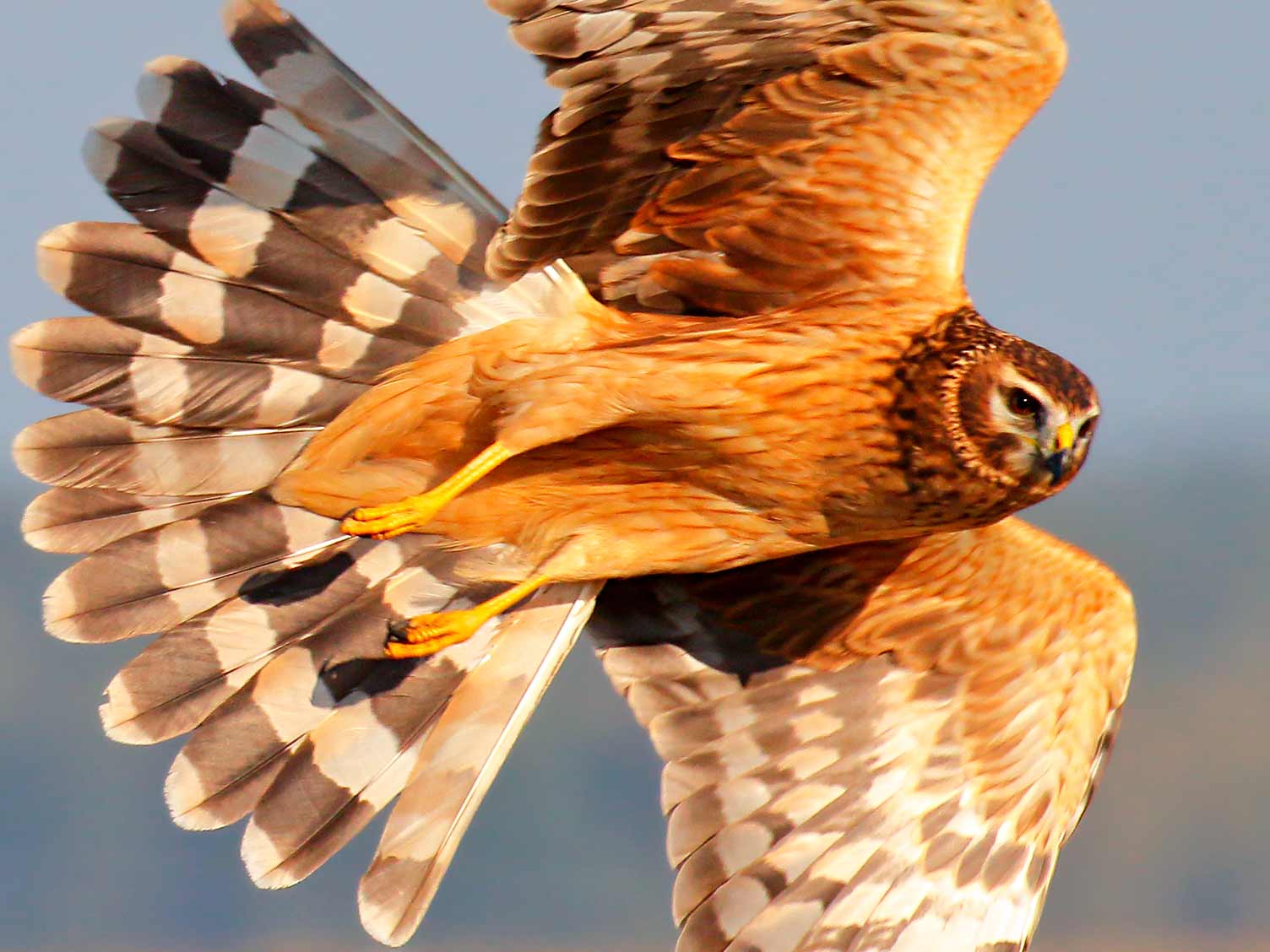 The male hen harrier is pale grey in colour and females are brown with a white rump and a long, barred tail - which means they are sometimes called ‘ringtails’. 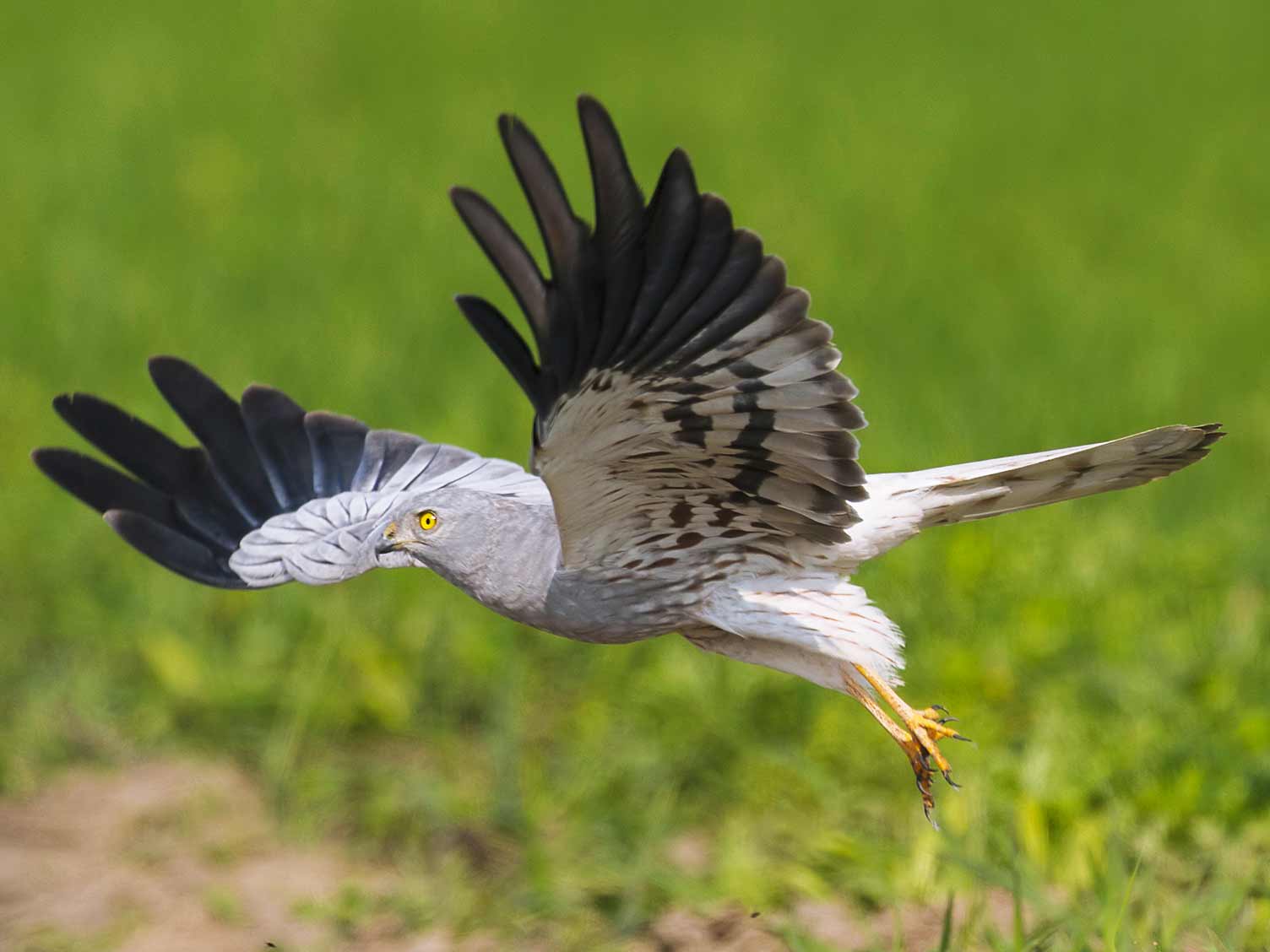 The Montagu’s harrier is slimmer, with distinctive black wingtips and you may even be able to see a black stripe inside the wing. Otherwise they are grey with long, pointy wings and a long tail but you are really only likely to see them in summer in the south east. 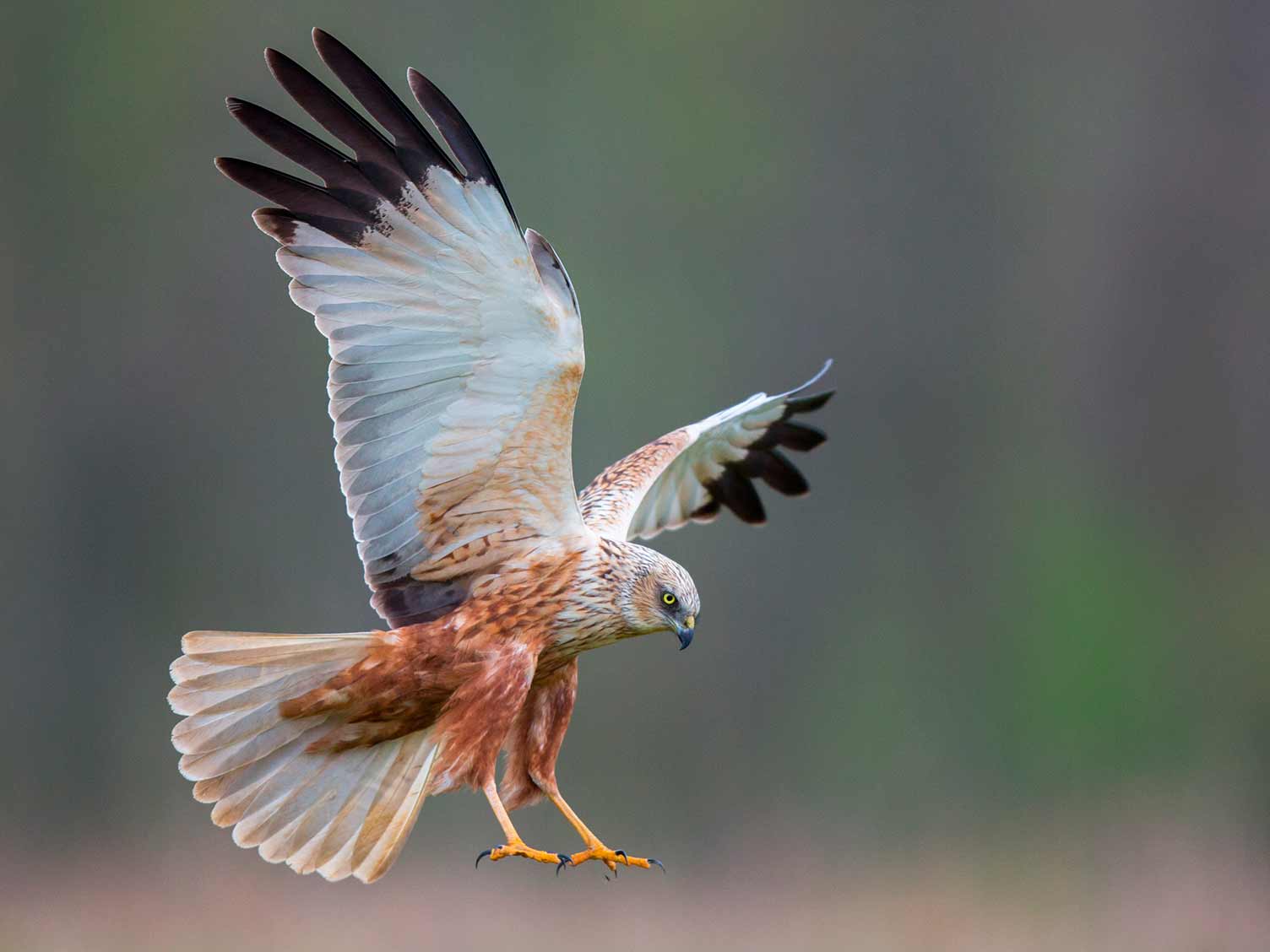 The largest of the harriers is the marsh harrier which is much bigger and heavier looking. The females have a cream head but unlike other harriers they don’t have any white on their back. Again, you will probably only spot them in regions in the east like Lancashire or Suffolk and you’ll be quite lucky to do so.

The most common UK bird of prey is the buzzard - with broad, rounded wings, and a short neck and tail. You often see them hovering high above in a V shape and you may see them in different shades of brown, from pale to dark. 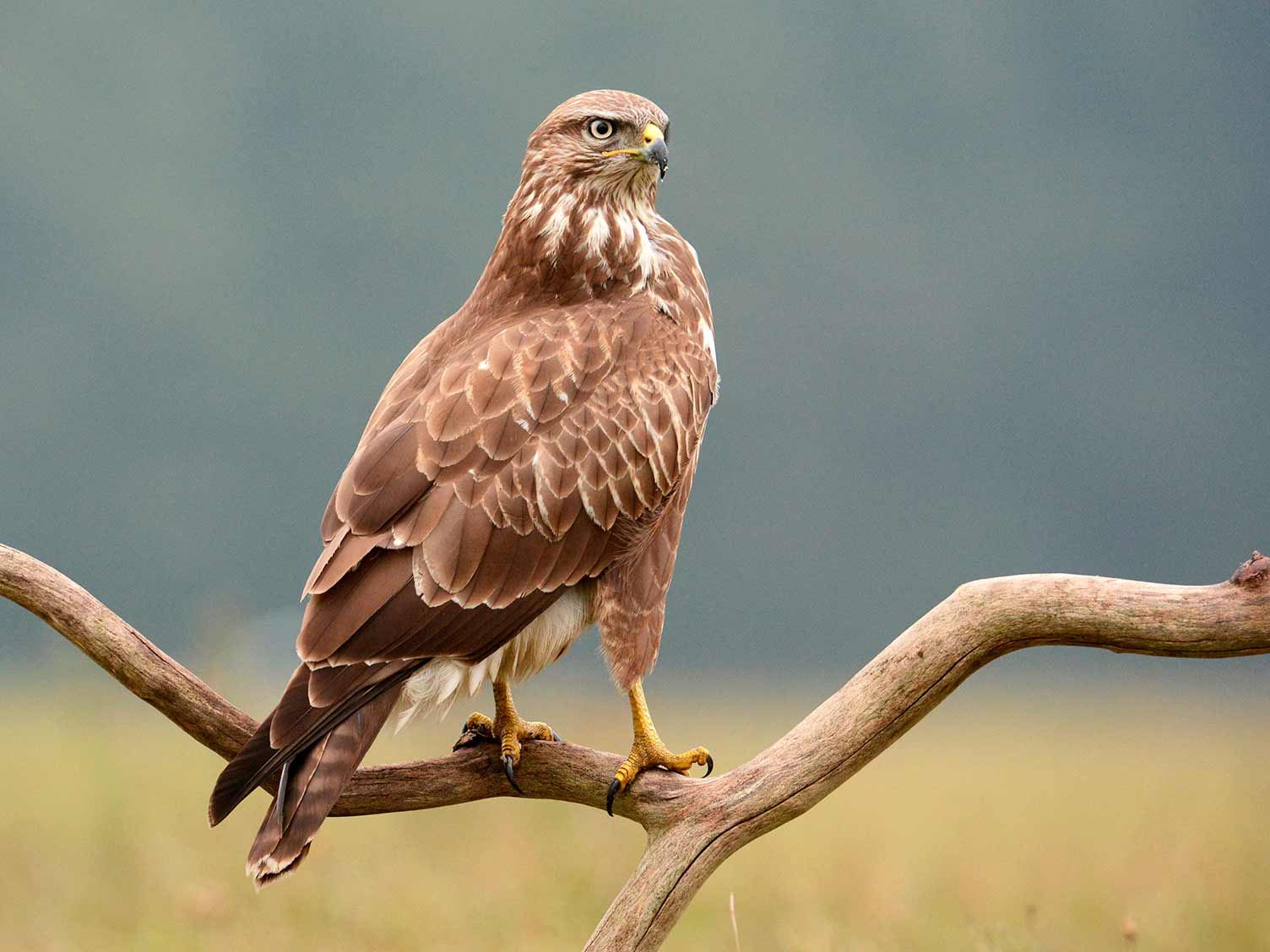 They all have dark wingtips and a distinctive, slightly haunting call which you can hear from far, far below them. You’ll spot them across the UK but during the winter you will mainly find them in the east. 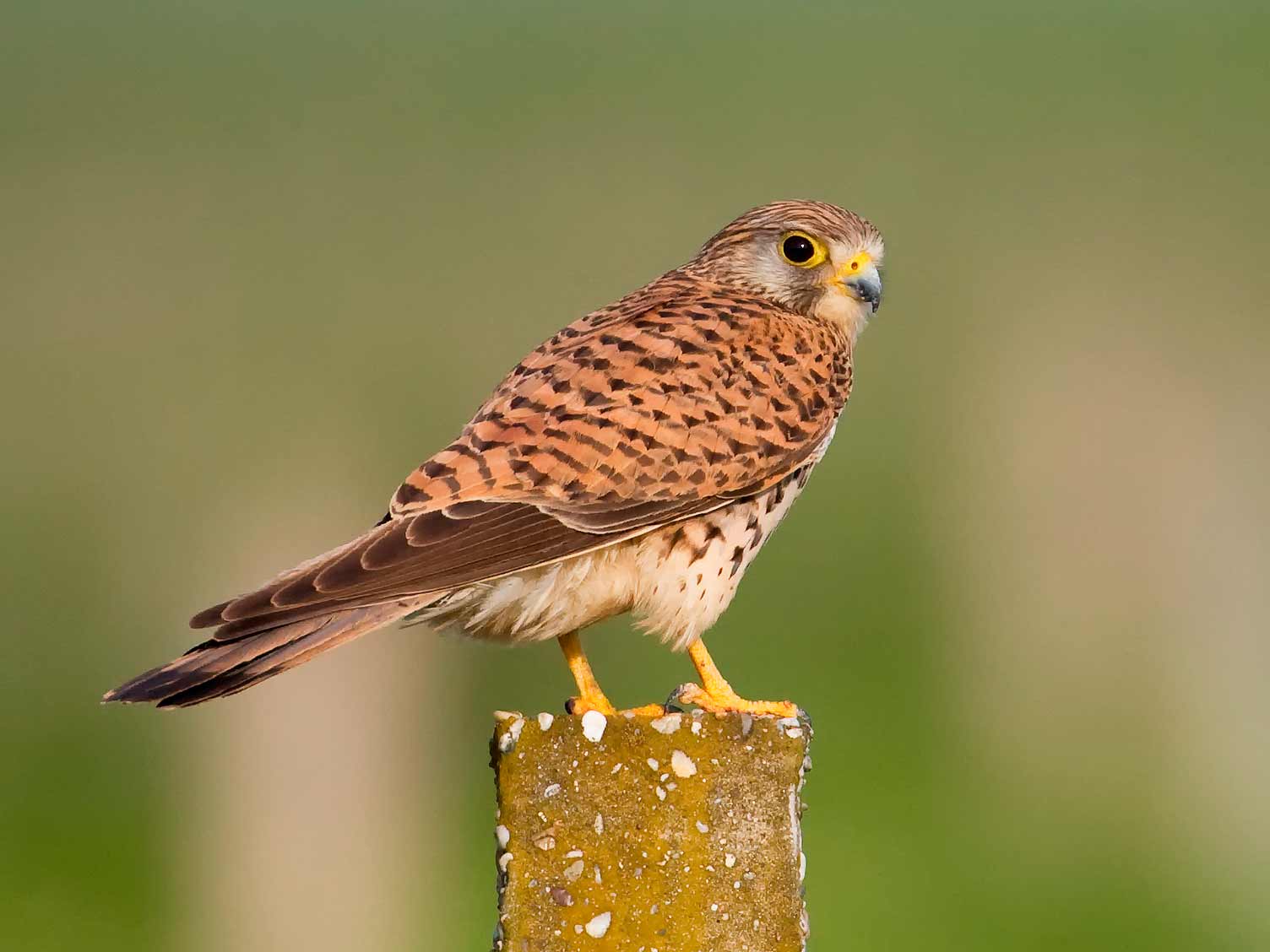 A reasonably common sight in the UK is the kestrel - part of the falcon family - with its red-brown flecked back, pale underside, dark tipped wings and almost grey head and tail. You’ll see it hovering or perched up high, particularly near a busy road. 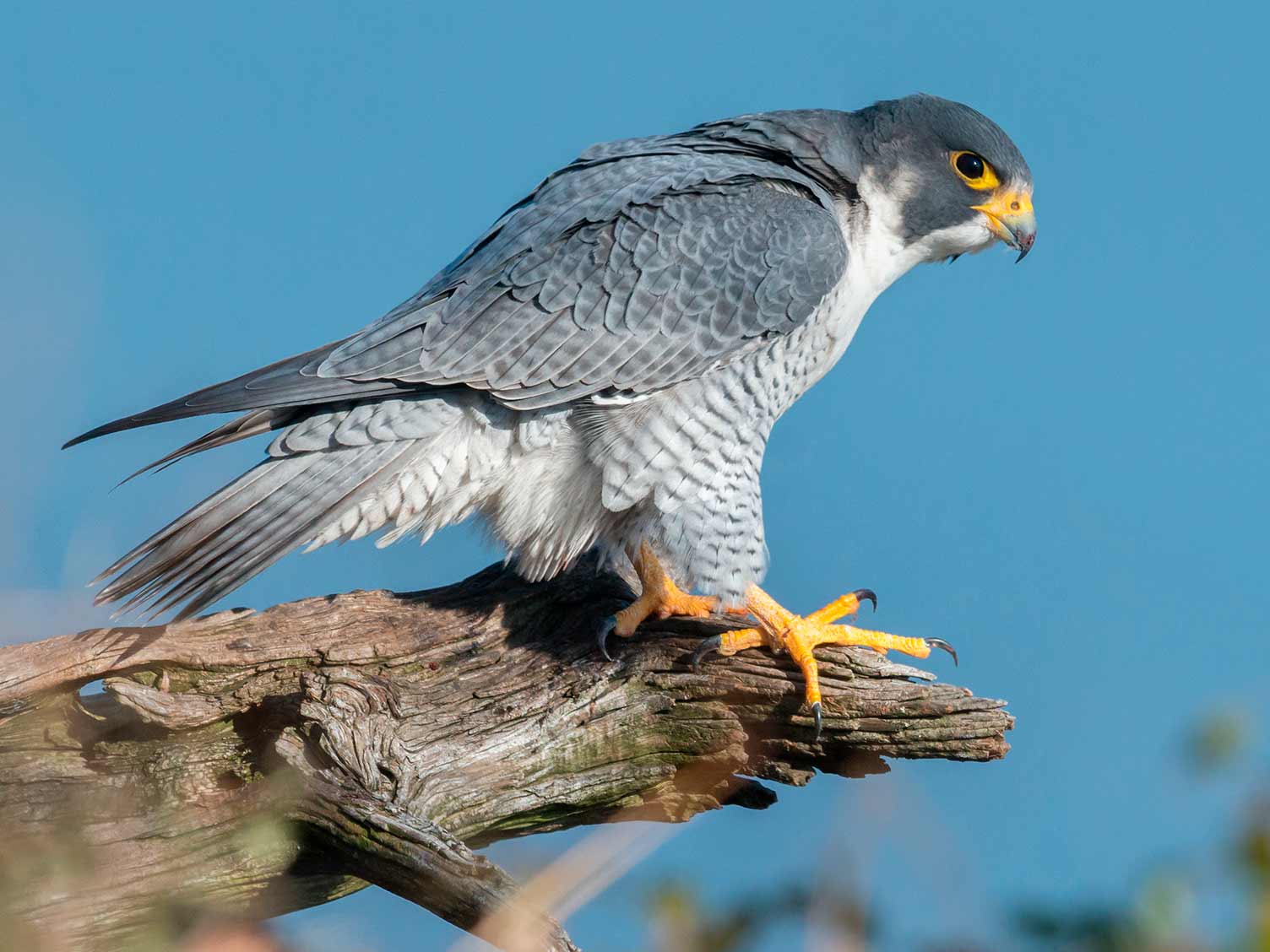 Also look out for the peregrine falcon. It’s very distinctive with broad, pointed wings and a relatively short tail. It is blue-grey, with a blackish head and markings that look like a droopy moustache. Its chest is flecked and it’s large, fast and strong. If you’re very lucky you might see one in southern England in the winter or on the east coast. 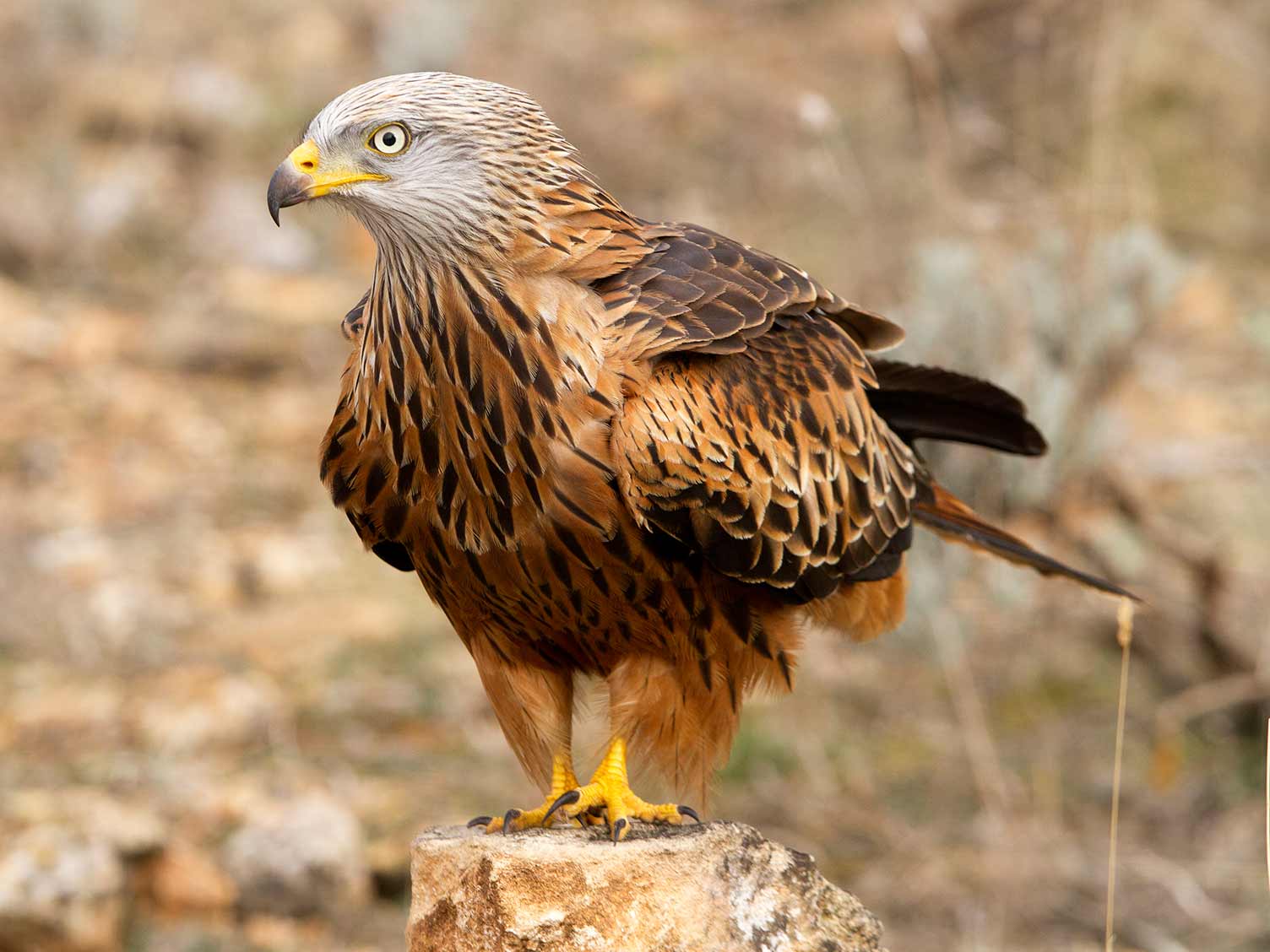 You’ll probably be able to identify a red kite fairly easy as it’s an elegant, graceful bird with a reddish-brown body and deeply forked tail. They are most common in central England and Scotland and they have a shrill call, a bit like a whistle or child’s high pitched yell.

You’ll be very lucky if you spot an eagle and they are mainly found in remote parts of Scotland and the Scottish isles, although you may be fortunate enough to spot one in Cumbria and they’re easy to identify, mainly because of their vast size. 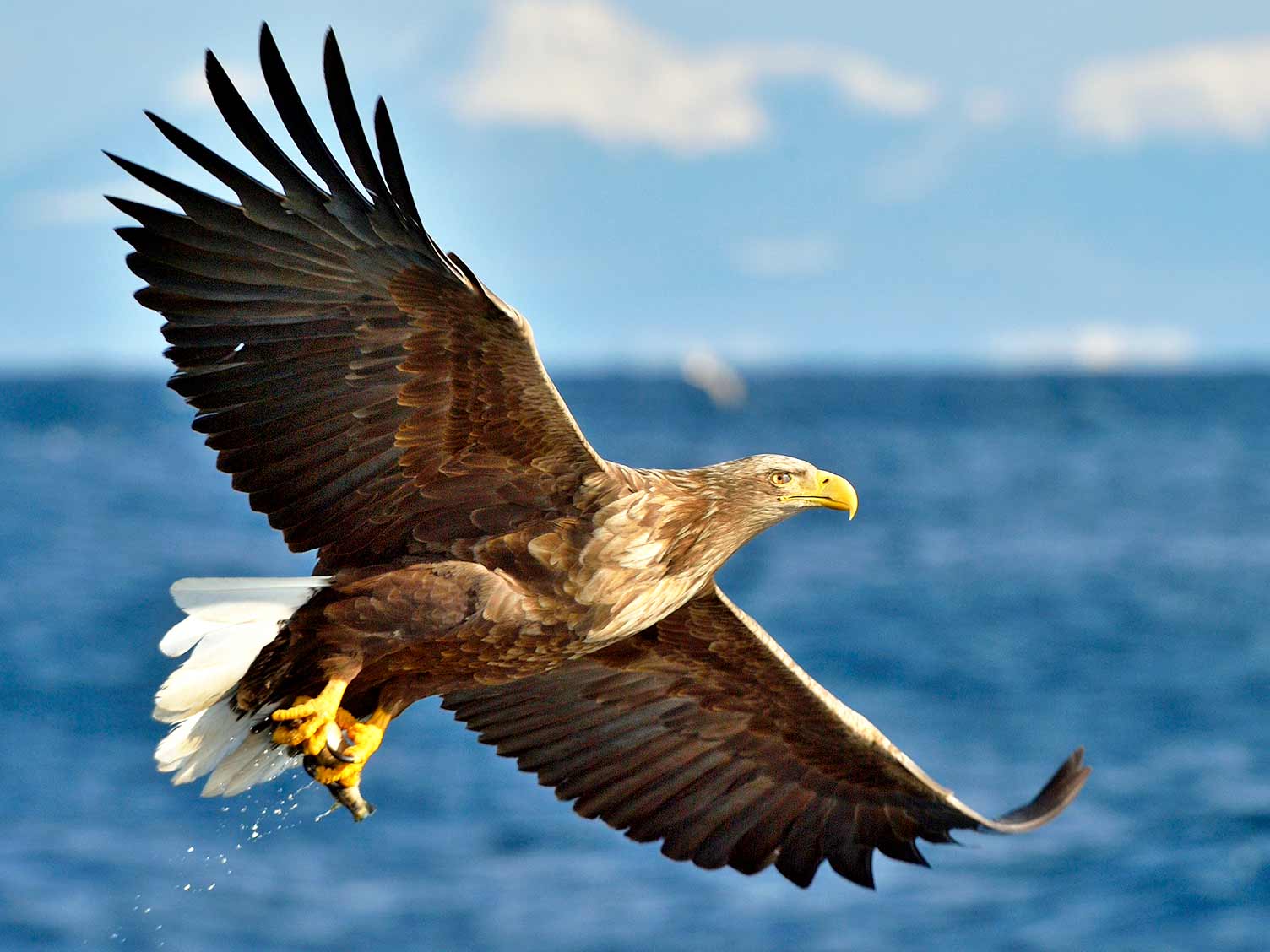 The largest UK eagle is the white-tailed eagle which has a brown body, pale head and neck and of course, white tail feathers and ‘fingered’ ends to its wings. You’ll really only see it in remote parts of north-west Scotland and it’s lucky to be there as it was actually extinct in the UK at one time. It’s slightly smaller cousin is of course the golden eagle which again, you’ll only really see in Scotland. 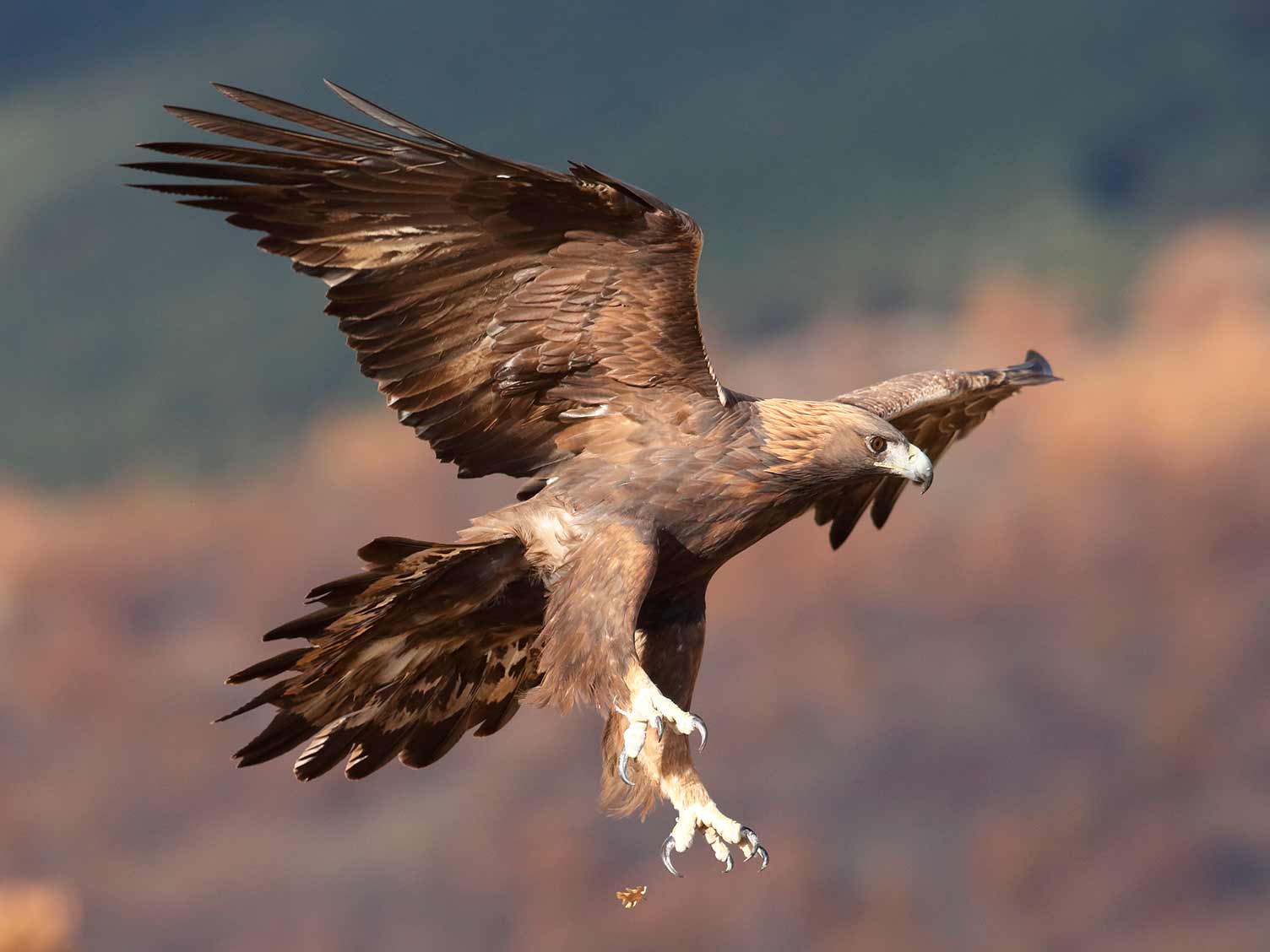 Things are looking up

Bearing in mind the chequered and persecuted past of our birds of prey, we’re really lucky to now have so many. Owls of course, are also birds of prey although mainly out at night and there are many others we haven’t been able to mention.

The good news is that the presence of so many of the birds we’ve described indicates a healthy and thriving environment able to sustain such large birds at the top end of the feeding chain and that’s really something to be celebrated. Of course, they can always do better with our help! You can find more information on helping birds here.

We’d love to see your photos if you’ve been lucky enough to snap any, so please share them with us at @LoveTheGarden and keep watching!

Feeding birds isn't just about scattering a few crumbs on the ground and hoping for the best. To attract different types...

How to attract birds to your garden

There is nothing more stress-relieving than sitting at a window watching the antics of our feathered friends as they...

Top public gardens you should visit in Spring or Summer

Spring is an exciting time for gardeners as the whole garden suddenly bursts back into life. Each year it’s a season...

10 ideas to get your garden ready for spring

We’ve put together 10 ideas to get your garden ready for spring.