Hollies are among the most valuable and versatile garden plants. They are either large shrubs or trees that provide colour and interest all year round with their attractive, ornamental, evergreen foliage – although some species are deciduous ­ – masses of white flowers in summer and gorgeous berries in the autumn and winter.

You can grow them as free-standing focal points in the garden, use them to make dense, intruder-proof hedges and they’re perfect for large pots on the patio, especially if trained and pruned into formal pyramid shapes. And, of course, you can cut branches to make your own festive Christmas decorations and wreaths.

Not all of them grow into large shrubs or trees. The hedgehog holly (Ilex aquifolium Ferox Argentea) is small and slow growing.

How to grow hollies

Most hollies prefer a site that receives full sun, or is lightly shaded. They need a moist, but well-drained soil, enriched with lots of organic matter. They will grow in most soils types, but don’t like gardens on solid chalk.

Most hollies are dioecious, which means the plant has either male (M) or female (F) flowers. So you will need a male plant to fertilise the flowers on the female plant for it to produce berries.

There are some self-fertile varieties that need no partners, such as Ilex aquifolium J C van Tol and I. aquifolium Pyramidalis, but even these will produce more berries if a male is growing close by.

Check the varieties before you buy them to make sure you get the sex you need. But be careful and don’t be misguided by their names. While some female-sounding names, such as ‘Madame Briot’ and ‘Golden Milkmaid’, are female, ‘Golden King’ is female and ‘Silver Queen’ is male! 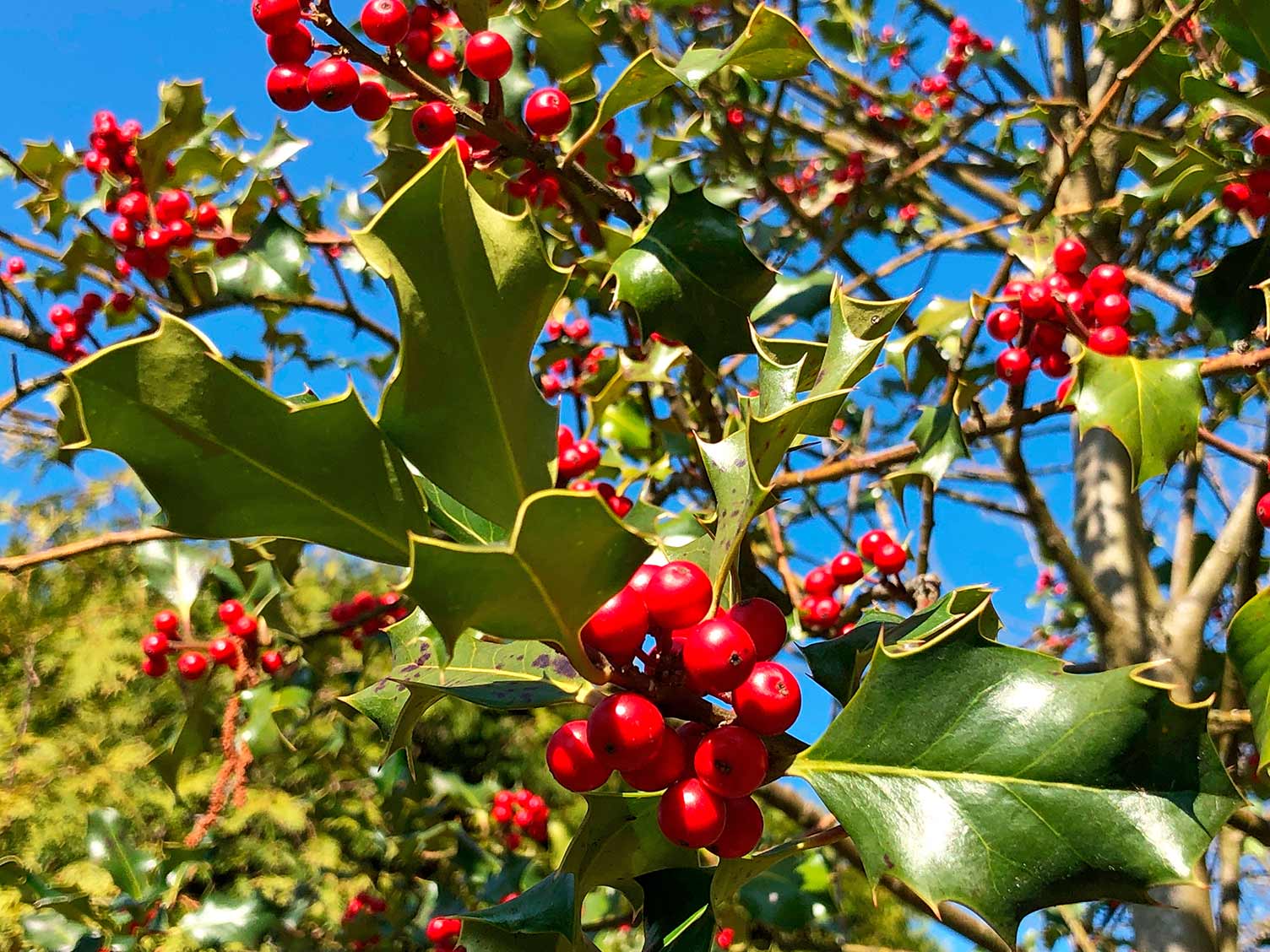 You can plant container-grown hollies any time of year, but preferably in autumn, winter or spring. Dig a hole 60x60cm (2x2ft) and 30cm (12in) deep. Add a layer of organic matter – such as compost or well-rotted manure – to the base of the hole and dig in.

Place the roots in the planting hole and adjust the planting depth so that the tree is planted at the same depth as it was originally growing and the top of the roots are level with the soil surface.

Mix in more organic matter with the excavated soil and fill in the planting hole. Water in well, apply a granular general feed over the soil around the tree and add a 5-7.5cm (2-3in) deep mulch of well-rotted garden compost or bark chippings around the root area.Plant 60cm (2ft) apart if you want to make a hedge.

How to care for hollies

Once planted and properly established, hollies need very little care and attention. They may need regular watering during prolonged dry periods in summer, especially when young and establishing in the soil.

Feed with a general granular plant food in spring and cover the soil with a thick mulch.

If any pruning is needed, it can be carried out at any time of year, although this is best done in spring to optimise berry production.

Make your own Christmas holly wreath

A great way to get into the Christmas spirit early is to prepare by making your own holly wreath. They look great, are...

Mistletoe comes into its own around Christmas time, when bunches are commonly hung as a decoration – usually in the hope...

A fast growing hedge will increase privacy, while also adding texture and interest to your landscaping.

Bamboos are wonderful garden plants, grown primarily for their architectural stems, or canes, and their foliage. These...