Japanese knotweed (Fallopia japonica) is a garden weed that is a real thug. It needs to be controlled before it spreads and becomes a severe problem. Its root system is so strong that it can cause severe damage to paths, drives and even house foundations.

What is Japanese knotweed?

Japanese knotweed is a perennial plant – living for many years – that spreads rapidly through the ground thanks to its deep penetrating rhizomes (creeping underground stems). These are strong enough to push up through concrete, Tar-macadam and similar surfaces and can even damage buildings. Each spring it produces bamboo-like stems, growing to more than 2.4m (8ft) high that will suppress other plants below. In winter, the stems die back to ground level. Its presence in gardens is such a problem that many property lenders are refusing to offer mortgages for properties affected by it, and in some cases property values have fallen by many thousands of pounds where it exists.

Interestingly, Japanese knotweed was introduced into Britain in the 19th century as an ornamental plant! The leaves, stems and creamy-white flowers produced in late summer and early autumn were considered very attractive. It does not produce seeds, but spreads and is propagated from even very small pieces of its rhizome. Japanese knotweed removal and control is not an easy or quick task, but one that may save you a lot of money in the long run. 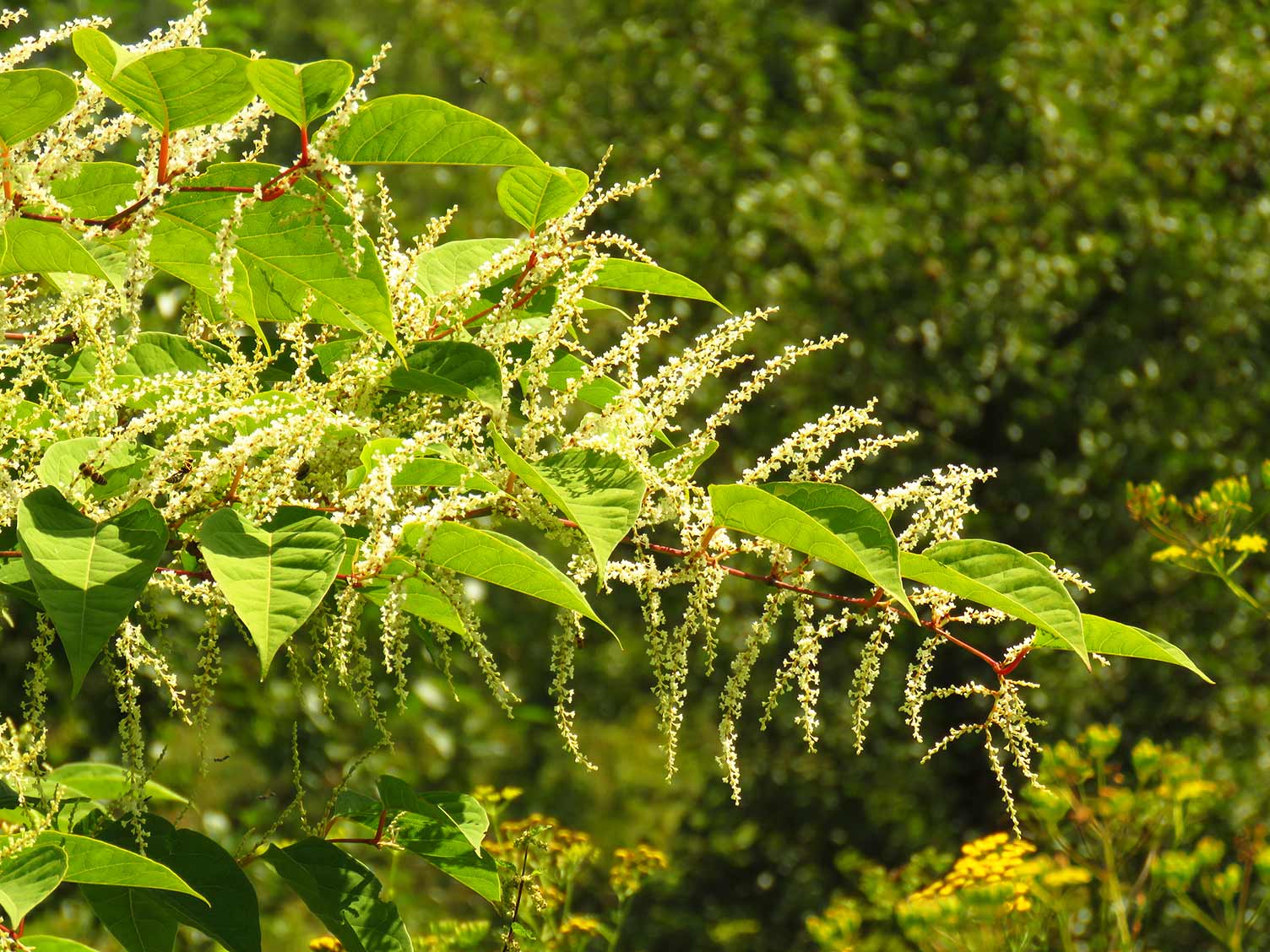 Japanese knotweed is quite easy to identify due to the distinctive heart shaped leaves and hollow green canes with purple speckles. The canes will start to appear in early spring and be mature by early summer. Spikes of white flowers will appear in late summer, but as the seeds are very rarely fertile they have little benefit to the spread of this weed. Japanese knotweed will tend to grow in dense clumps, the canes will turn brown in the autumn but can remain standing throughout the winter with fresh shoot growing up around them the following spring.

How to get rid of Japanese knotweed

Early action on Japanese knotweed control is essential to prevent it spreading.

You can start by digging up plants, but the rhizomes are very tough and deep and you may have to attack them with a pickaxe or similar. No matter how careful you are, pieces of root are bound to remain and regrowth will occur.

Then repeatedly destroy any regrowth to exhaust the strength and energy remaining in the rhizomes. This could take several years to give full control.

In accordance with The Anti-social Behaviour, Crime and Policing Act 2014 individuals and companies must take action to remove and prevent the spread of invasive non-native plants such as Japanese knotweed.

Digging out the rhizomes does create a problem over disposal, since Japanese knotweed is classed as ‘controlled waste’ under the Environmental Protection Act 1990. Under the provisions of the Wildlife and Countryside Act 1981, it is an offence to cause Japanese knotweed to grow in the wild, so it is illegal to simply dump it anywhere. Much of its spread is through topsoil movement, for instance.

Once dug up, it can be destroyed by allowing the plants to thoroughly dry out and then burning it.

Visit the GOV.UK website to find out more about harmful weeds and invasive, non-native plants, and how to prevent them spreading.

How to kill Japanese knotweed

Any weedkiller containing glyphosate will help to control and kill Japanese knotweed. The best time to spray is during flowering in late summer. However, this may not be easy to achieve since the plant will have reached its full height by then. A more practical method is to spray the foliage when the growth is about 90cm (3ft) high, usually in May. The regrowth can then be treated in mid-summer and again in September before the stems start to die down. Check again the following spring and repeat the process.

One of the most effective Japanese knotweed treatments is to cut back the stems and apply the weedkiller inside the cut stems. Roundup Tree Stump Weedkiller is the only home and garden weedkiller that carries detailed instructions and an application pipette for this method.

For severe infestations, it may be better to use a professional contractor specialised in its control. Your local council may be able to help you with details of local contractors or there are several recommended companies listed on the internet.

How to remove tough tree stumps and roots

Removing tough tree stumps can be harder than felling the tree itself, but it's a task worth taking care of sooner...

Unlike annual weeds, perennial weeds are big and invasive, rooting themselves firmly into your garden landscape, unless...

Weedkillers are chemicals specifically designed to control common garden weeds. They are manufactured according to very...

Definition of a weed

Find out what a weed really is and why we call it a weed. What is a weed? The dictionary says that a weed is “a wild...