Plums, and their closely related damsons and gages, are all easy fruits to grow at home. They produce large (often too large!) reliable crops of fruit, which is available in a range of coloured skins and flesh. Dessert plums and gages produce sweet flesh and can be eaten fresh straight from the tree. The more tart culinary plums and gages, and damsons make delicious jams, preserves, pies and crumbles.

More compact modern varieties and semi-dwarfing rootstocks ensure that even small gardens can have their own tree – and make them perfect for growing in large containers.

How to grow plums, damsons and gages

Plums, damsons and particularly gages need a warm, sunny site, which isn’t exposed – strong winds can reduce pollination by bees, leading to a poor crop. As a result, they are often grown as a fan, trained up against a south-facing wall or fence.

Always plant out of frost pockets, which again can affect the flowers and reduce pollination and fruit set.

They prefer a fertile soil enriched with lots of organic matter, which holds plenty of moisture in spring and especially in summer when the fruit is ripening, doesn’t dry out or become waterlogged.

Plums are large, usually soft-fleshed – perfect for eating or cooking, depending on the variety. Gages are small, round and generally very sweet. Damsons are hardy and have a tart flavour, which is excellent when cooked.

If you only want to grow one tree, make sure you choose a variety that is self-fertile. The following are all self-fertile varieties. 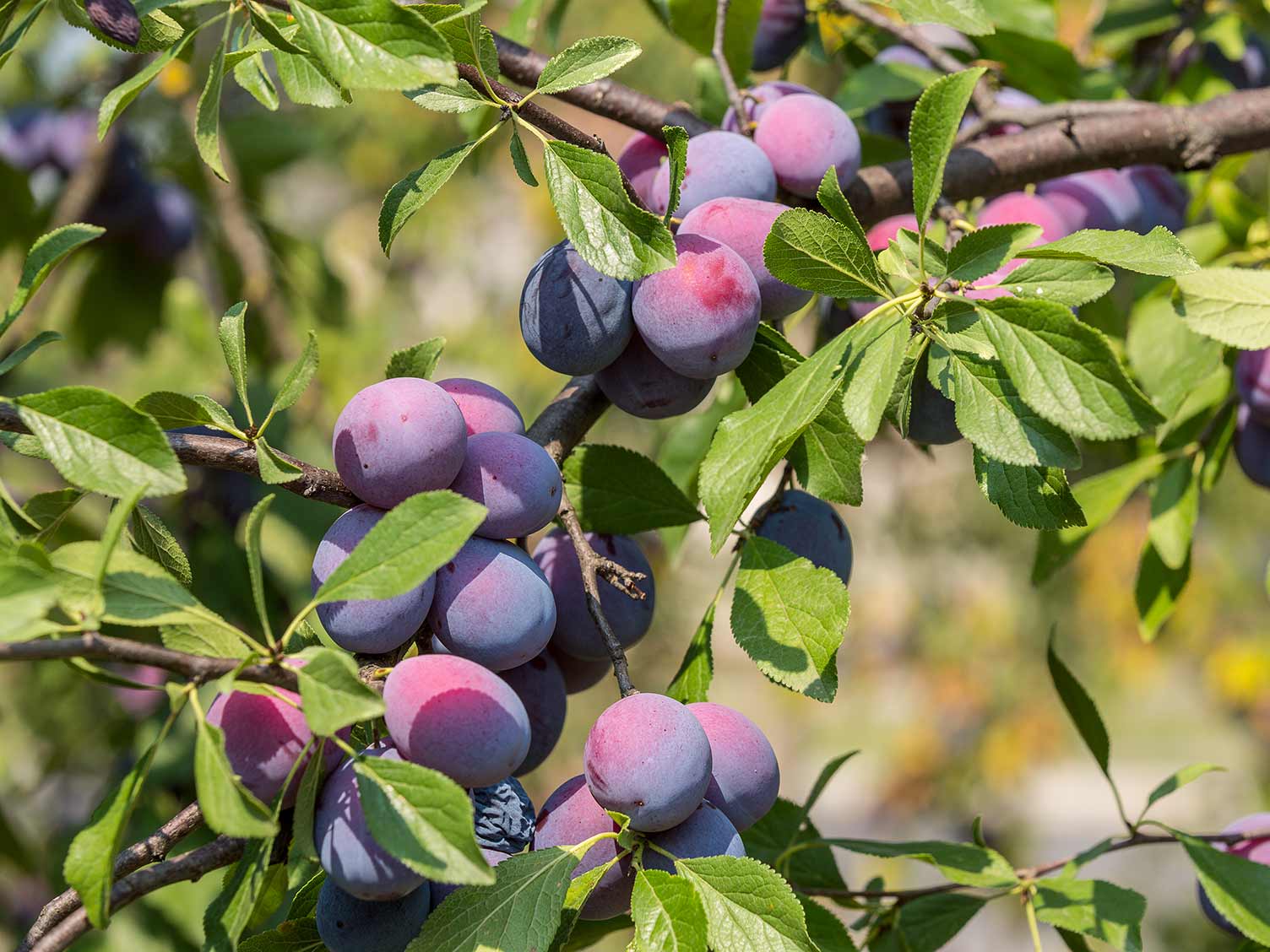 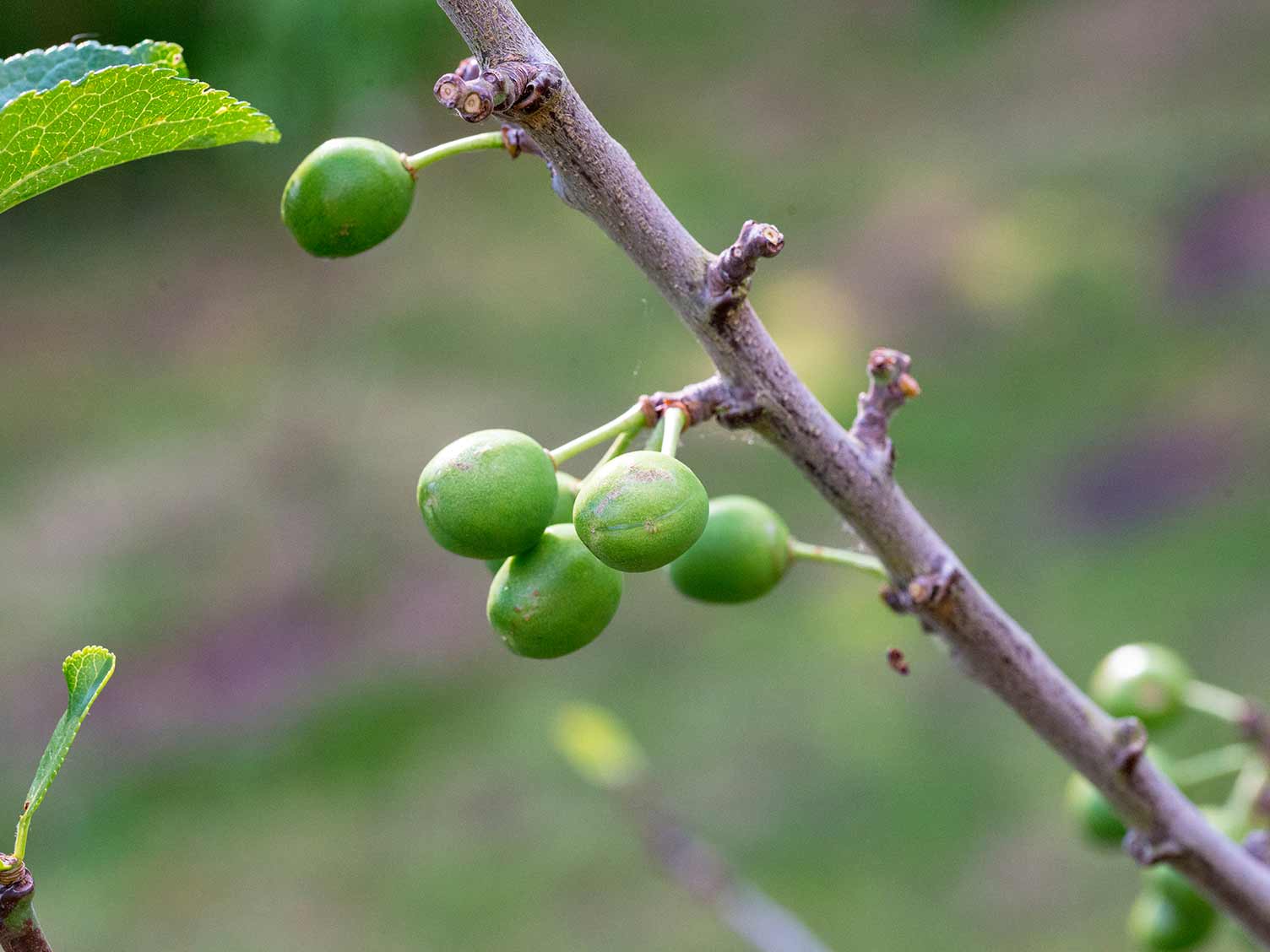 Many plum, damson and gage varieties are self-fertile, meaning you only need to grow one tree, rather than having to worry about pollination from another variety that flowers at the same time. So it is a better and easier choice to stick to self-fertile varieties.

Plum, damson and gage trees are available grafted onto different rootstocks, which control the overall size the tree will grow to as well as how early in their life they start fruiting. The eventual size will vary, depending on your soil; on heavy clay and fertile soils the trees will grow slightly bigger.

Dig a hole 60x60cm (2x2ft) and 30cm (12in) deep. Add a layer of organic matter - such as compost or well-rotted manure - to the base of the hole and dig in. Place the roots of the tree in the planting hole and adjust the planting depth so that the old soil mark on the trunk is level with the soil surface.

Now mix in more organic matter to the soil and fill in the planting hole. Stake the tree with a rigid tree stake and two tree ties so that it is fully supported against the prevailing winds. Water in well, apply a granular general feed over the soil around the tree and add a 5cm (2in) deep mulch of well-rotted garden compost or bark chippings around the root area.You can also grow trees in large patio pots (minimum of 40-50cm/16-20in in diameter). Use John Innes No 3 Compost, as its weight will help with stability of the container.

How to care for plums, damsons and gages

Once established, plum, damson and gage trees are unlikely to need regular watering, except in very dry conditions, but may need watering when the fruit is developing to help ensure a bumper crop.

Trees growing in containers, however, will need regular watering in spring and summer to prevent the compost drying out.

Add a controlled-release granular plant food to the soil surface each spring to ensure the tree is fed throughout the growing season. Because plums and gages produce such heavy crops, they respond well to feeding.

Trees that produce poor crops of fruit will benefit from feeding with sulphate of potash.

Their flowers can be very susceptible to frost damage, so wherever practical cover with horticultural fleece when severe frost is predicted.

Birds will often damage the fruit, so net small trees and fans as the fruit ripens.

If you buy a fully trained tree it will need little in the way of pruning for the first few years at least.

Pruning must always be carried out when the tree is in full growth – usually any time from May to the end of August. Pruning at other times of year risks infections from disease – particularly bacterial canker, which can kill even fully grown trees.

It pays to know what, how and why you’re pruning, as wrong or excessive pruning can lead to crop reduction. Most times all you need to do is remove dead, diseased, dying or damaged branches, branches that rub against each other and those that cross from one side of the tree to another.

If you constantly have to prune the top of the tree to reduce its height, then you’ve probably bought the wrong variety growing on the wrong rootstock!

What and how you prune depends on the way the tree is being grown and trained; the 3 commonest are bush, pyramid and fan.

Pruning is mainly limited to removing crossing, weak, vertical and diseased growth. If the tree is still overcrowded, then further pruning and thinning can be done in July.

Shorten the central main stem by around two-thirds early in the tree’s life. Repeat every year until the tree has reached 1.8m (6ft) high on Pixy rootstock and 2.4m (8ft) on St Julien A. After that, shorten it to 2.5cm (1in) or less each May to keep the tree at the same height. Vertical shoots at the top of the tree competing with the central main stem should be removed.

Prune back branches growing away from the support to 3 to 4 leaves. Prune back fruited shoots to a suitable sideshoot to replace the removed shoot.

Once fruit has set, it may need thinning to ease congestion, which can lead to a lot of smaller fruits. Wherever possible, thin to 5-7.5cm (2-3in) apart.

Overly heavy crops one year can lead to small, insignificant crops the next. Also, very heavy crops can weigh down the branches and even snap them. So it pays to support heavily-laden branches with a Y-shaped prop, put in place in early summer.

Pick the fruit once it has developed a good colour, but before it turns too soft, holding it by the stalk if possible, not the fruit itself.

The fruit of dessert varieties is best eaten fresh, but can be stored in the fridge in a plastic bag for up to 7-10 days.

The best and easiest fruit to grow at home

Most fruits are hardy enough for British gardens although apricot, peach, fig and grape need shelter from extreme...

Growing fruit and veg in containers

Even if you only have a small garden or just a patio, you can still easily grow your own tasty fruit and vegetables.

Feeding fruit bushes early in spring ensures that the plant roots can draw on valuable nutrients whenever they come into...

12 fruits and vegetables that are toxic to dogs

There are many common fruit and vegetables which are toxic to dogs.