Prickly pears and other Opuntia species are very popular desert cacti grown as houseplants. They are highly ornamental, made up of segmented stems of wide, flat, thick pads that are covered in spines.

Some have large, rounded spines while others have tiny, hair-like barbs that detach on contact with the plant, stick in the skin and can be difficult to remove – so handle with care.

The edible, lemon-shaped or plum-shaped prickly pear fruit, sometimes called ‘Indian figs’, of some species of Opuntia is becoming something of a delicacy in the UK. They are also very colourful and ornamental. When mature, their outsides become bright red and the inside flesh turns orange. Some varieties are yellow on the outside when ripe and green inside. These are not quite as sweet, and are used in syrups, preserves and jellies. However, you need perfect conditions for plants to produce good-sized fruit in the UK.

How to grow prickly pear cacti

Indoors prickly pears need a brightly lit position, preferably a south-facing or west-facing aspect or grown in a conservatory or heated greenhouse with good, all-round light. They need 4-6 hours of direct sunshine in summer.

They are not cold or frost hardy, but can be moved outside to a warm, sunny patio in summer. Make sure you bring them back indoors before the weather turns cold in early autumn.

They need a minimum spring and summer temperatures of 18°C (65°F), but prefer cooler temperatures in autumn and winter of 7-13°C (45-55°F) while they’re dormant. Keep them away from direct heat and radiators as well as draughts and fans that cause fluctuating temperatures.

There are more than 200 species of Opuntia. They range in height from low-growing plants, reaching 30cm (1ft) high to those than can easily reach 5.4m (18ft).

Probably the best one to grow at home is Opuntia microdasys, which has the common name of bunny ears. This only grows to 30-45cm (12-18in), has oval pads with tufts of small, golden spines. But don’t be fooled by their size, these tiny barbs can be as uncomfortable as much larger spines if you get them in your fingers. 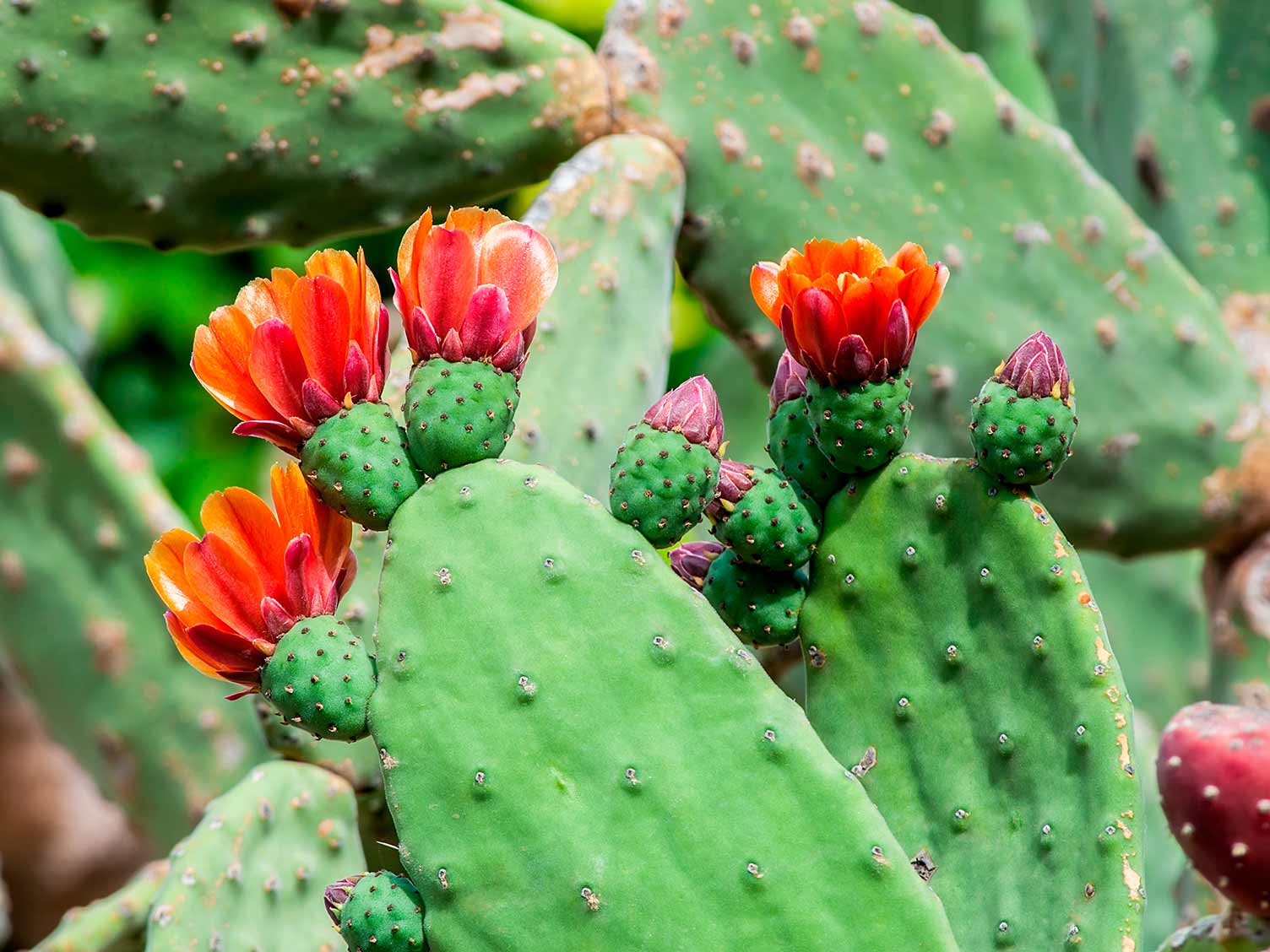 Like all other desert cacti, they need a very well-drained compost, so either add extra grit to a John Innes Compost or, better still, use a compost specifically recommended for cacti and succulents.

Add a topdressing of gravel, pebbles or sharp sand on top of the compost to produce a natural, finished look and to help prevent the base of the plant sitting in wet compost.

Be careful of the spines when handling the plants. When potting up or otherwise moving the plants, it pays to wear gloves and to use a collar made from a rolled up newspaper around the stem.

How to care for prickly pear cacti

Being desert cacti, many people think you don’t have to water them. While they can survive long periods of drought by storing water in their stems, they grow – and flower – much better if given adequate supplies of water. Water moderately when plants are in growth (from March/April to September), but more sparingly when dormant – once or twice a month may be sufficient in autumn and winter. Allow the compost to dry out slightly before watering again and always allow the compost to drain, never allowing the pot to sit in water.

Feed with a balanced liquid feed once a month during the growing season from late spring to late summer, but don’t feed in autumn and winter.

Prickly pears should only be repotted when absolutely necessary – only when they become extremely potbound or have outgrown their current container. Only repot into the next size pot in late spring or early summer.