How to grow and care for Honeysuckle

Evocative of summer country gardens twining around garden fences, walls or pergolas, Honeysuckles are a favourite amongst informal gardeners. Most Honeysuckles have a sweet heady summer fragrance that pollinators and in particular bees and butterflies are attracted to in the day, with moths feeding on the nectar at night. Honeysuckle blooms are followed by red berries in the autumn which are popular with birds.

Honeysuckles are most commonly known as climbers, either evergreen, semi-evergreen or deciduous. Their decorative and fragrant flowers appear over the summer period and into autumn, with some varieties flowering earlier or later in the year. The classic variety of Honeysuckle, known as ‘Lonicera’, is generally easy to grow and likes nothing more than plenty of space to showcase its fragrant and showy flowers. There are other shrubby Honeysuckle varieties that make a great hedge or evergreen coverage.

Some Honeysuckles are native to the UK and others are from further afield in Asia and America. Honeysuckle is also known as Woodbine, stemming from it originally growing in woodland and climbing up trees, explaining their preference for either dappled shade or sun for part of the day.

Honeysuckle plants are readily available for sale in the UK in garden centres, nurseries and online.

Types of Honeysuckle to grow

There are two main types of Honeysuckle: 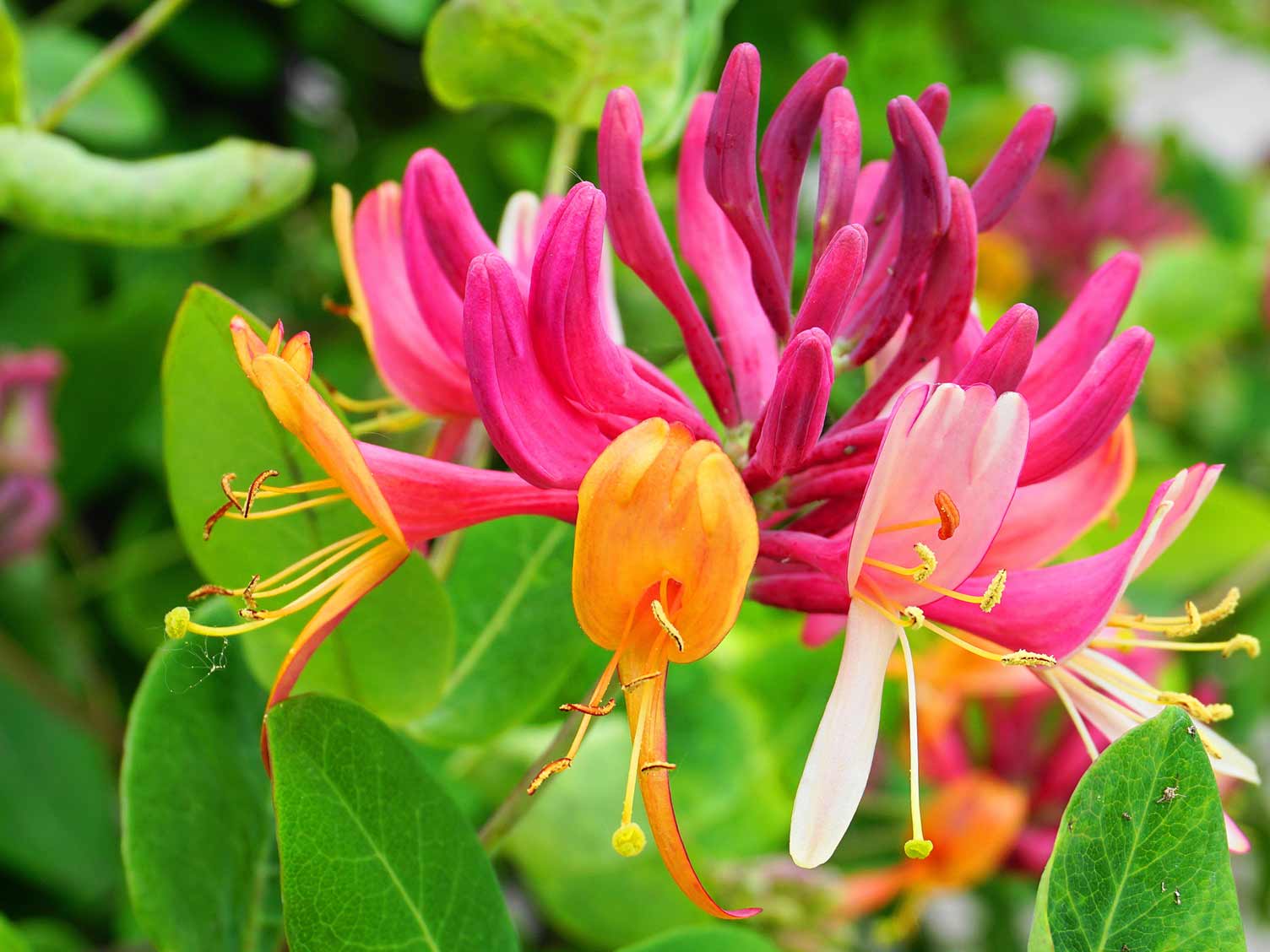 Shrubby Honeysuckle comes in either deciduous or evergreen varieties. As a general rule of thumb, the evergreen varieties have shiny dark glossy leaves that respond well to clipping, making a good choice for hedging or even shaped for topiary. The only thing to note is that regular clipping will reduce flowering as the growing buds will be taken off.

The deciduous varieties can have woody stems and are beautifully scented white flowers in the early spring/late winter, helping any early pollinators. Lonicera x purpusii or Lonicera fragrantissima are good examples.

With over 180 varieties to choose from, there is sure to be one that suits your garden – whether climbing, evergreen, deciduous or shrubby.

What you’ll need to grow Honeysuckle

How to plant climbing Honeysuckle

How to plant shrubby Honeysuckle

Planting shrub Honeysuckle can be done at any time of year, but just as with other planting, avoid the hot summer months as it’s more difficult for any plants to put down new roots.

Follow the above steps for planting climbing Honeysuckle, but without adding any support.

Where to plant and place your Honeysuckle

As a vigorous grower, climbing Honeysuckle needs plenty of space to grow into, whether it's over a pergola, against a fence or even weaving its way through a tree. As a species that originates in woodland, both the shrubby and climbing Honeysuckle grow best in dappled shade or only sun for part of the day - avoid a spot where there is full sun as your Honeysuckle won't flower and can develop powdery mildew.

How to sow Honeysuckle from seed

Collect the ripe Honeysuckle berries in the autumn from a mature plant, making sure to wear gloves as they can be poisonous to humans. Remove the red flesh, clean the seeds with warm water and allow them to dry out.

As Honeysuckle needs a cold temperature to germinate, either sow directly into the soil in the late autumn or pot up with compost and refrigerate for about 12 weeks.

After the initial 12 weeks, move to a greenhouse in early spring and keep lightly moist until warm enough to harden off and then plant out when they are approximately 10cm.

Honeysuckle can also be grown from seed by scattering the cleaned seeds in raked and prepared soil in October/November. The disadvantage of using this method is the small seedlings have to compete with weeds in the spring and may be overcome.

Being in the right position is important for Honeysuckle plants to give their best show of blooms. Without too much attention, they can live for around 20 years.

Caring and nurturing your Honeysuckle

In the spring, keep your Honeysuckle well watered, but not soaked, and apply a generous layer of mulch.

Make sure the light remains dappled and only sun for part of the day.

If you’re planting your Honeysuckle, apply a slow release fertiliser when planting and then again each year in spring and halfway through the growing season.

If planting in pots, add a liquid feed during the growing season every fortnight.

When to prune Honeysuckle

Depending on when your Honeysuckle flowers and which variety it is, there are varying methods of cutting back the stems.

This type of Honeysuckle flowers on the current season's growth, so a light prune in spring will ensure blooms for this year. Going for a heavy prune will mean you will most likely reduce flowering for the current year.

As with all pruning, remove any dead or damaged stems to encourage an open and healthy framework.

Prune Honeysuckle soon after the flowers have finished. And with this type of Honeysuckle, flowers are produced on side shoots from last season's growth. Cut back the flowered shoots by approximately one third by late summer.

If your Honeysuckle is short on space, cut back the side shoots to around 2 or 3 buds from the main stems.

If you are looking to do a tidy-up an overgrown and very ‘woody’ Honeysuckle, tackle a restorative prune in late winter. Pruning the stems to around 50-70cm, means in the spring you should be rewarded with a flush of new stems. If needs be, thin out any of the new growth so the strongest stems remain.

This works best for the climbing varieties. Using the long flexible stems, bend down the stem to the earth and peg in if necessary. Lightly cover with soil, adding some root hormone to help the new roots develop. All being well, your new Honeysuckle will flower in around three years at maturity.

In spring through to early summer, take a semi-ripe cutting from your Honeysuckle. Semi-ripe means that the wood is both flexible and firm - the base is firm but the tips are soft.

Choose a healthy stem where the leaf nodes are close together, this ensures that the cutting length isn't too long (around 10cm or less).

Choose a straight, good condition stem about the same thickness as a pen.

Cut off about 20-25cm and push into a pot of peat-free compost and ideally keep in a cool greenhouse or cold frame over winter. Check every now and again to make sure the compost is neither too wet or too dry and by spring you should see new shoots appearing.

Does Honeysuckle grow in shade?

Most varieties of honeysuckle, both climbing and shrub, need some light. However, their favourite conditions are where their roots stay in the shady cool and their foliage and flowers enjoy some sunlight. The sunlight can either be dappled shade or sun for part of the day and shade for the rest.

If your Honeysuckle is getting less light than its variety needs, you will see more foliage and fewer flowers.

How fast does Honeysuckle grow?

Honeysuckle is a fast growing plant in the right conditions and should flower in its first season. Some varieties of Honeysuckle can live for up to 20 years, with their first mature flowering starting in around their third year.

Does Honeysuckle grow in pots?

Yes, Honeysuckle can be grown in pots and containers. Make sure your pot is big enough to sustain this fast growing climber with good drainage holes. When planting, use good quality peat-free compost and make a hole as big as the Honeysuckle root ball. Add in some balanced fertiliser and place the Honeysuckle climber in the hole, cover and water well. Add some more fertiliser partway through the growing season.

Don’t forget to include a trellis or wires for your Honeysuckle to wind its way up and through, and place the pot or container somewhere with dappled shade or part sun.

Is the Honeysuckle vine invasive?

Most of the Honeysuckle climbers plants that are available in UK garden centres and nurseries, both on and offline, are non-invasive. Shrub Honeysuckle can take over, so keep an eye on any saplings and pull out.

Common pests and diseases with Honeysuckle

What is the most common Honeysuckle pest?

Aphids (Honeysuckle aphid). If you see the leaves become twisted and curled, it could be a sign they have an attack of aphids. The aphids excrete a substance that leads to dark colour mould.

As a rule of thumb, plants that are not in good health will be more prone to an infestation, so make sure your Honeysuckle is correctly watered and fed.

Encourage natural predators into the garden such as ladybirds and lacewings that will eat the aphids but if it’s a really bad infestation try an organic insecticide such as BugClear Ultra.

What is the most common Honeysuckle disease?

To help reduce the onset of powdery mildew, weed well around your Honeysuckle, mulch in the spring, and avoid over congestion of plants to aid airflow.

Always water really well at the base of the plant and try not to wet the leaves.

Where should I plant my Honeysuckle to avoid pests and diseases?

To help prevent both aphids and powdery mildew in the first instance, plant your Honeysuckle in partial sun or in a dappled shade spot.