Clematis – sometimes known as the queen of the climbers – are very versatile climbing plants. With careful selection of species and varieties you can have flowers all year round in a kaleidoscope of colours and a wide range of flower shapes.

How to grow clematis

Despite the old saying ‘plant clematis with their heads in the sun and their feet in the shade’, there are numerous clematis that will grow in shade – including north-facing walls. Always check before buying or look for directions on the plant label. Most will give a ‘NSEW’ description – north, south, east or west, which describes the aspect(s) they can be grown in.

However, it is true that they prefer their roots to be in the shade, as they prefer a cool root run, so cover the soil with mulch, gravel or even large stones. Or, if you prefer, plant shallow-rooted perennials or summer-flowering annuals in front of them

Clematis are extremely popular climbers, and range from vigorous climbers that can cover large areas, to more compact varieties, including those suitable for growing in containers, and those that can be used as ground cover. Most are deciduous, dropping their leaves in autumn, but there are a few evergreen ones, including C. armandii, C. cirrhosa and C. cartmanii ‘Early Sensation’.

There is a clematis for every month of the year. The earliest to flower is C. cirrhosa and its varieties (December-February), followed by C. armandii (March-April), C. alpina, C. macropetala and C. montana, which flower throughout spring.

The large-flowered, summer-flowering varieties provide a fabulous splash of colour in summer, often flowering for several months. The last to flower include the ‘viticella’ varieties, C. tangutica, C. orientalis and C. texensis, which flower well into autumn plus C. rehderiana, which finishes with the hard frosts in late November/early December. 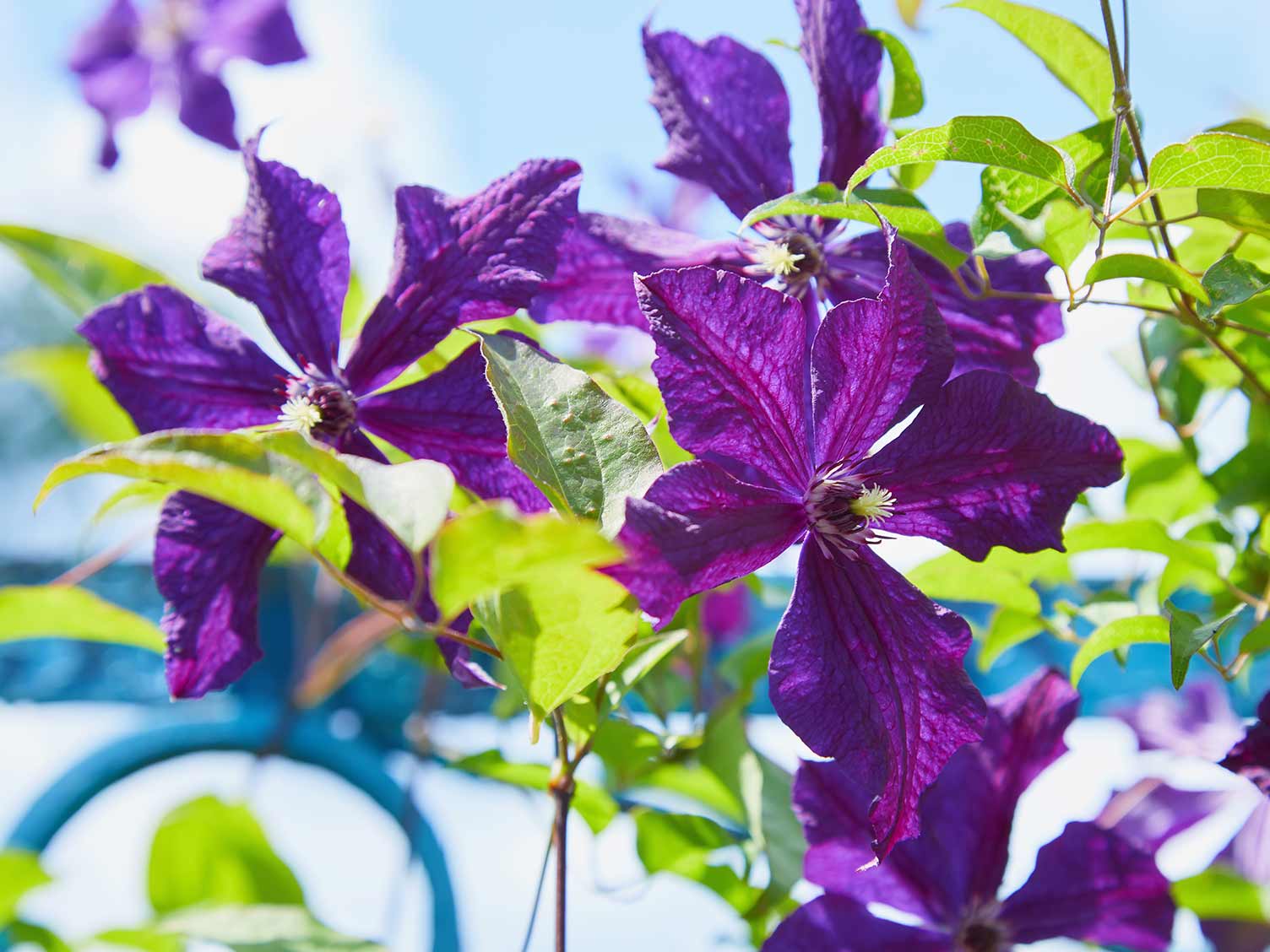 Large-flowered, summer-flowering varieties are best planted with the top of their rootball 5-7.5cm (2-3in) below the soil surface. This will help them recover if they are attacked by clematis wilt disease or if the stems are damaged or severed.

How to care for clematis

Feed with a high potassium feed in late winter or early spring and again after the first flush of flowers finishes. A continuous-release rose and flowering shrub feed is an excellent option.

Being a vigorous climber, clematis will need a stout support to grow up, or they can be trained to scramble through trees and large shrubs.

Train in the young stems regularly to prevent the new growth becoming a tangled mess or bird’s-nest of stems.

Because their stems are quite brittle and at risk of damage – especially during windy weather that can shatter the stems – tie in the stems at regular intervals and choose a suitable support. A series of horizontal wires isn’t substantial enough. Wooden trellis or even small mesh plastic clematis netting are far better, as there are lots of places for the twining tendrils to attach to, making the plant more secure and much less prone to damage.

There is a lot of mystery surrounding clematis pruning, but knowing which clematis you have and following some simple logic, it really is quite straightforward.

The truth is, you don’t have to prune clematis – but if you don’t, the stems do become a tangled mess and the flowers are produced well out of sight.

Pruning timing and severity depends on the species and variety – basically, when they flower – and so to which of the 3 pruning groups they belong to.

Wisterias are gorgeous climbing plants, perfect for covering walls and fences or grown over pergolas and arches where...