How to grow and care for an Ornamental Quince

The Ornamental Quince is a small, pretty shrub with lots to offer to any garden. Chaenomeles spp. produce abundant flowers from February through to May, which are enjoyed by bees. The blossoms are followed by attractive, slow developing fruit which are a great source of food for birds throughout the summer. The shrub also doesn’t need much maintenance and is super easy to look after. Here is our essential guide on how to grow Ornamental Quince.

Types of Quince to grow

Chaenomeles spp. are sometimes confused with the related quince (Cydonia oblonga), but the Ornamental quince is grown primarily for its flowers rather than fruit. It is often called Flowering Quince. The fruit of Chaenomeles spp. can be eaten, but they are smaller than the fruit produced by Cydonia.

Ornamental Quince is also a much smaller shrub than the edible tree which can sometimes reach 15 feet.

The main species of Chaenomeles to grow are: 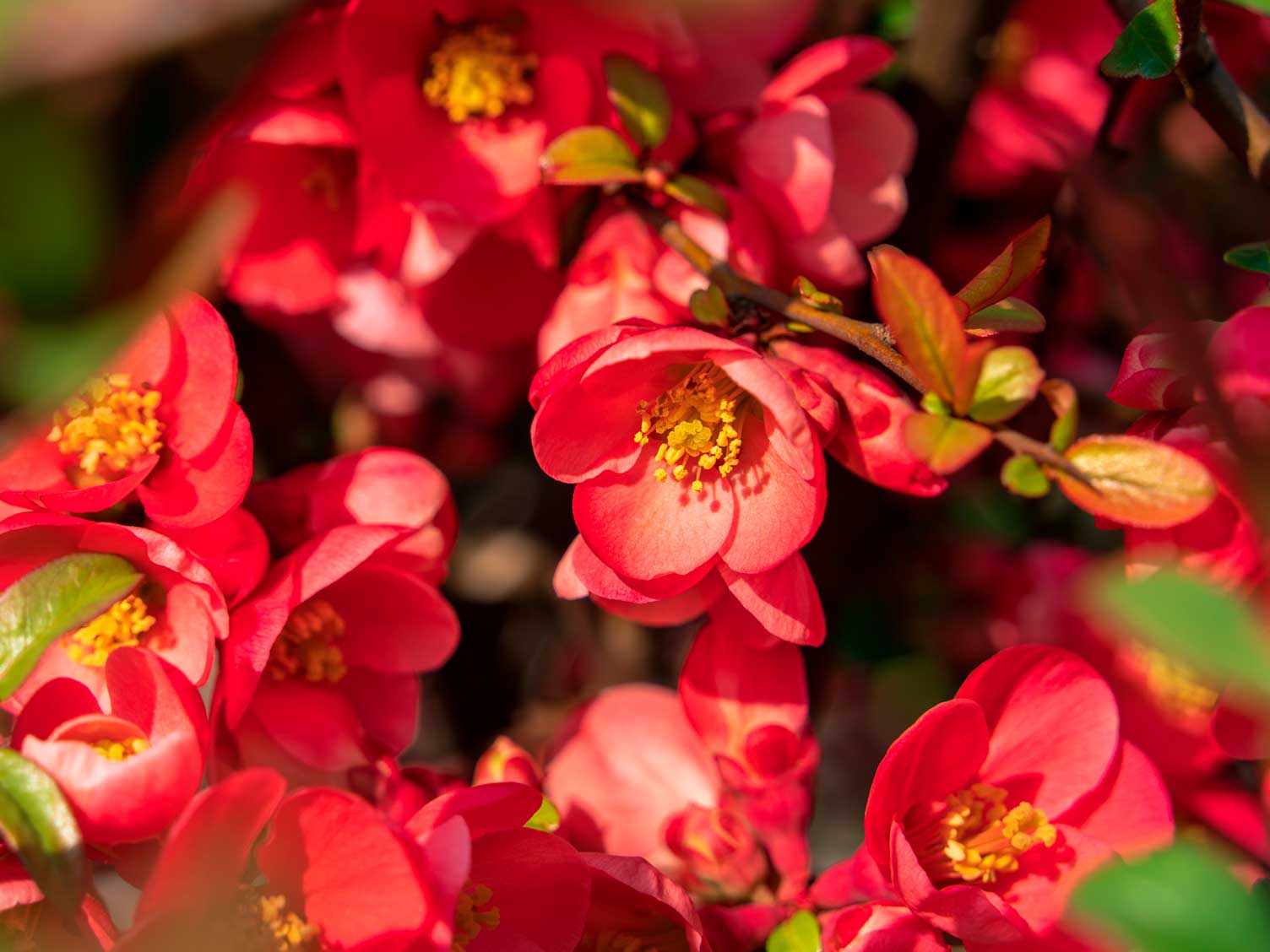 Ornamental quince can be grown from seeds, but takes a long time and germination is variable. An easier way to propagate your own quince is by tip layering from an existing plant, in the spring, after new leaves have begun to appear.

Ornamental quince plants have a naturally arching habit, so find a long branch, gently bend it towards the ground and simply bury the tip of the stem in nearby soil. You may need to weigh it down so that the stem doesn’t spring up before it has taken root.

Ornamental quince are best planted out in the winter, when the quince becomes dormant. You will need:

Easier and quicker still is to purchase an Ornamental quince from a garden centre or online retailer. An ideal time to do this is the autumn, when the soil is still warm but not too dry.

Where to plant and place your Ornamental Quince

Locate the Ornamental quince in full sun, or dappled shade. They will grow especially well in full sun, which will encourage flowering. They are fully hardy to frosty conditions, but should be protected from strong winds.

Ornamental quince are best placed in a border, where they can be left to spread across the ground. They can be grown in a container, but moisture levels will need to be closely monitored, and plants will always be much happier in bare soil. Ornamental quince will grow in acid through to alkaline soil.

The arching and dense habit of Chaenomeles spp. mean that it is not easy to train against a wall. However, Chaenomeles are deciduous woody perennials and produce small thorns, making it a great security deterrent to plant around the perimeter of a garden. The spikes also mean it is best placed away from paths.

Caring and nurturing your Ornamental Quince

Ornamental quince flowers on old wood, so prune after flowering in May-June. Only prune to maintain a manageable size and shape, and to remove dead or diseased growth. Make sure to remove enough growth from the centre of the plant to allow good air circulation. As they are very thorny, wear thick gloves which cover the forearms too.

Ornamental quince fruits can’t be eaten raw but do make excellent jellies and jam. However they are smaller than the fruits of Cydonia, and a little fiddly to prepare!

How easy are Ornamental quinces to grow?

Quinces are incredibly easy to grow as they are tolerant of most soil and pH types.

Can Ornamental quince be grown in pots?

Yes, but they will need more care and attention to maintain moisture levels than those grown in the ground.

No, they are deciduous and will lose leaves in the autumn.

Why is the bark on my Ornamental quince becoming swollen and producing a sappy substance?

Canker is a serious disease which can severely weaken and eventually kill an Ornamental quince. Act quickly to prune affected parts of the plant back to 15cm (6”) beyond any visible damage.

What are the shiny brown lumps on the leaves of my Ornamental quince?

Scale insects can attack Ornamental quince, clinging on to the underside of leaves as they suck sap from the plant. Mature plants will be able to withstand a small number of scale insects, and the population will be controlled by natural predators, such as ladybirds and birds. Encourage these into your garden. Larger infestations of scale insects can be treated with BugClear™ Ultra Gun!

Why is new growth on my Ornamental quince stunted and gnarly?

Aphids love to feed on young foliage and flower buds. They need managing if these grey-green pests appear in large number. Encourage ladybirds, birds, and other predators which will consume the aphids. Spray with a strong blast of water from the hose, and squish between fingers. Badly affected flower heads can also be removed and immersed in soapy water to kill off the aphids.