Ants are both a gardeners friend and foe…

Ants in the house

Ants have a varied diet. The search for food by the worker ant often takes them indoors. They eat sugar, fats and grains. Not surprisingly, they are often found in the larder and kitchens during the summer.

Ants in the garden

Garden ants are more of a nuisance than a real problem and they rarely damage plants directly. Large nests may literally expose the root systems of plants to thin air rather than earthly nutrients, which will cause them to dry out. In some instances they can farm aphids for their sugary honeydew, and protect them by eating their predators.

How to get rid of ants

There are many ways to kill ants but some are not as effective as others. Some products are fast acting and you see the ants die right before your eyes (i.e. boiling water and ant powder), but remember the ants that you see, walking about above ground, are just the worker ants. The nest is the heart of the problem, it houses the queen and 100’s of larvae and cocoons. You need to kill the nest to stop the problem. No nest, no ants, no problems. 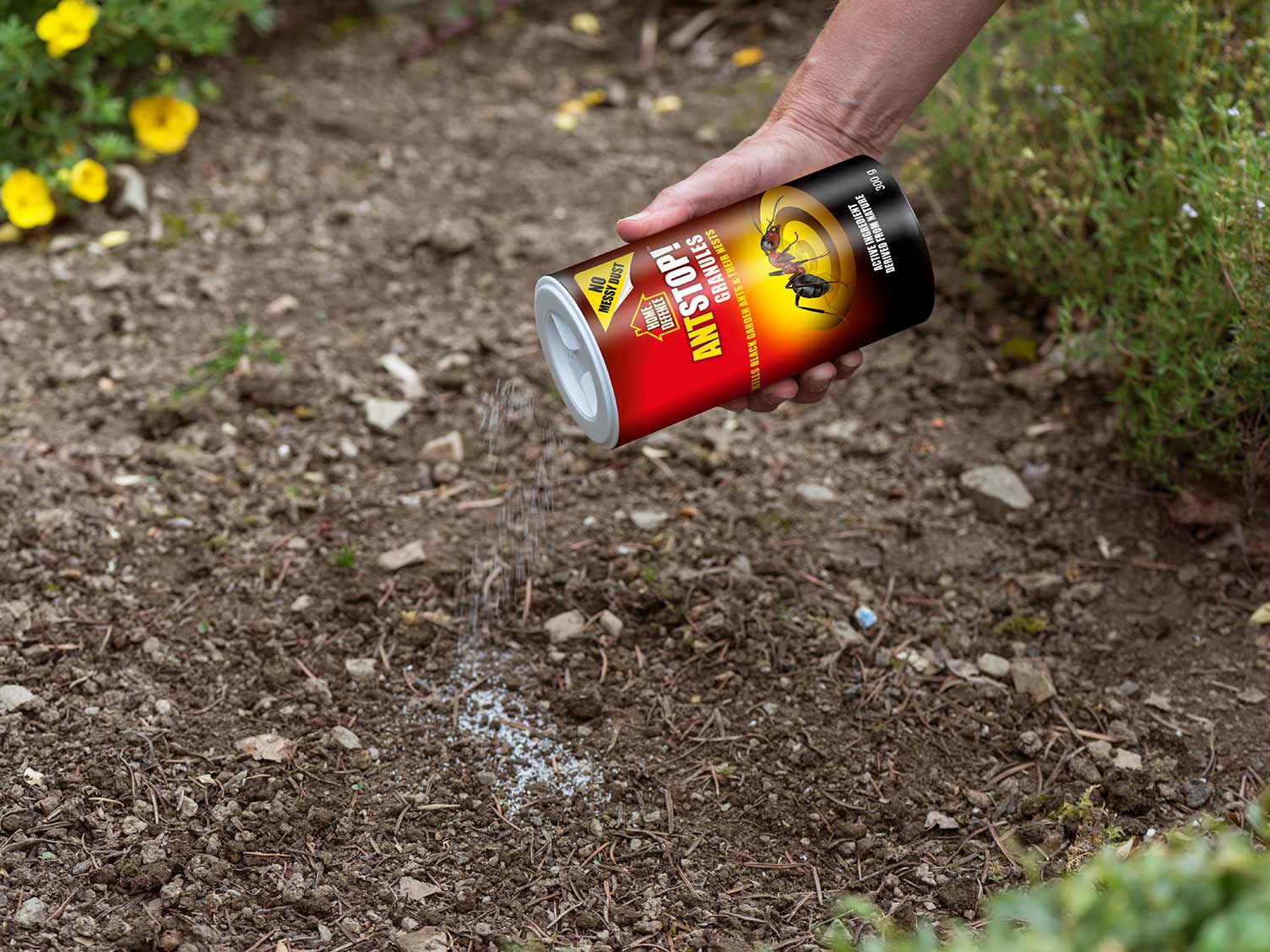 Granules can be used inside the house and outside in the garden, either by sprinkling dry granules or some products granules can be mixed with water and poured straight into nests. When sprinkled down dry, the ants take this back to the nest, which will kill the whole colony.

These are normally a ready to use liquid, which can also be used indoors and outdoors. The best place to spray is where they walk to and from their nests, as they will take it back into the nest and it will infect the whole colony and destroy them. 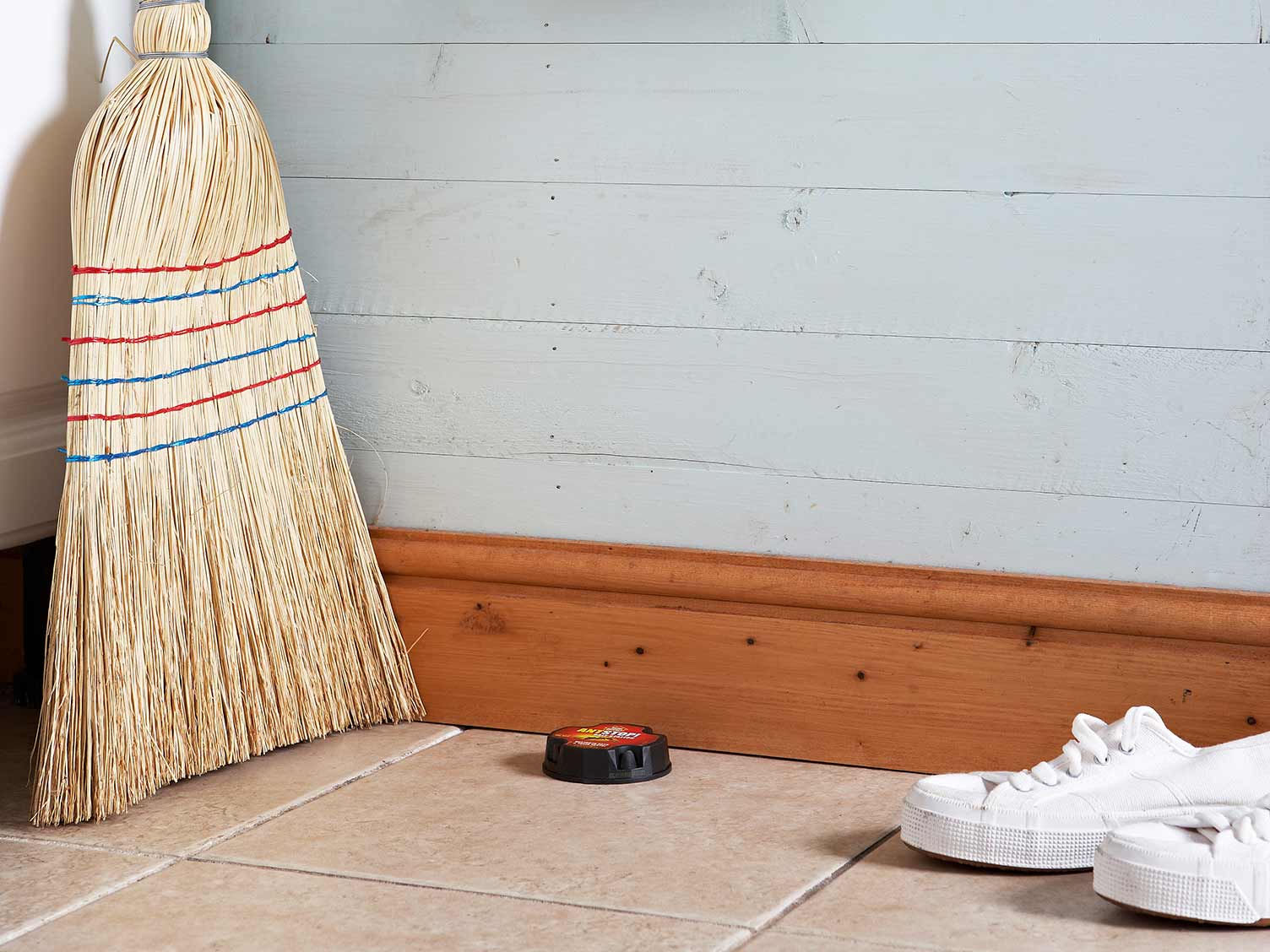 The best way to control ants is by destroying the nest. Bait Stations work by worker ants collecting the bait and taking it back to the nest, which they share with other ants in the nest, including the queen. This way the whole nest is destroyed. The best place to lay the bait stations is adjacent to nests or runs.

There are about 11,000 species of ants in the world, but because they prefer warm environments only 50 species are in the UK. Here are the 6 most common ants found in the United Kingdom. 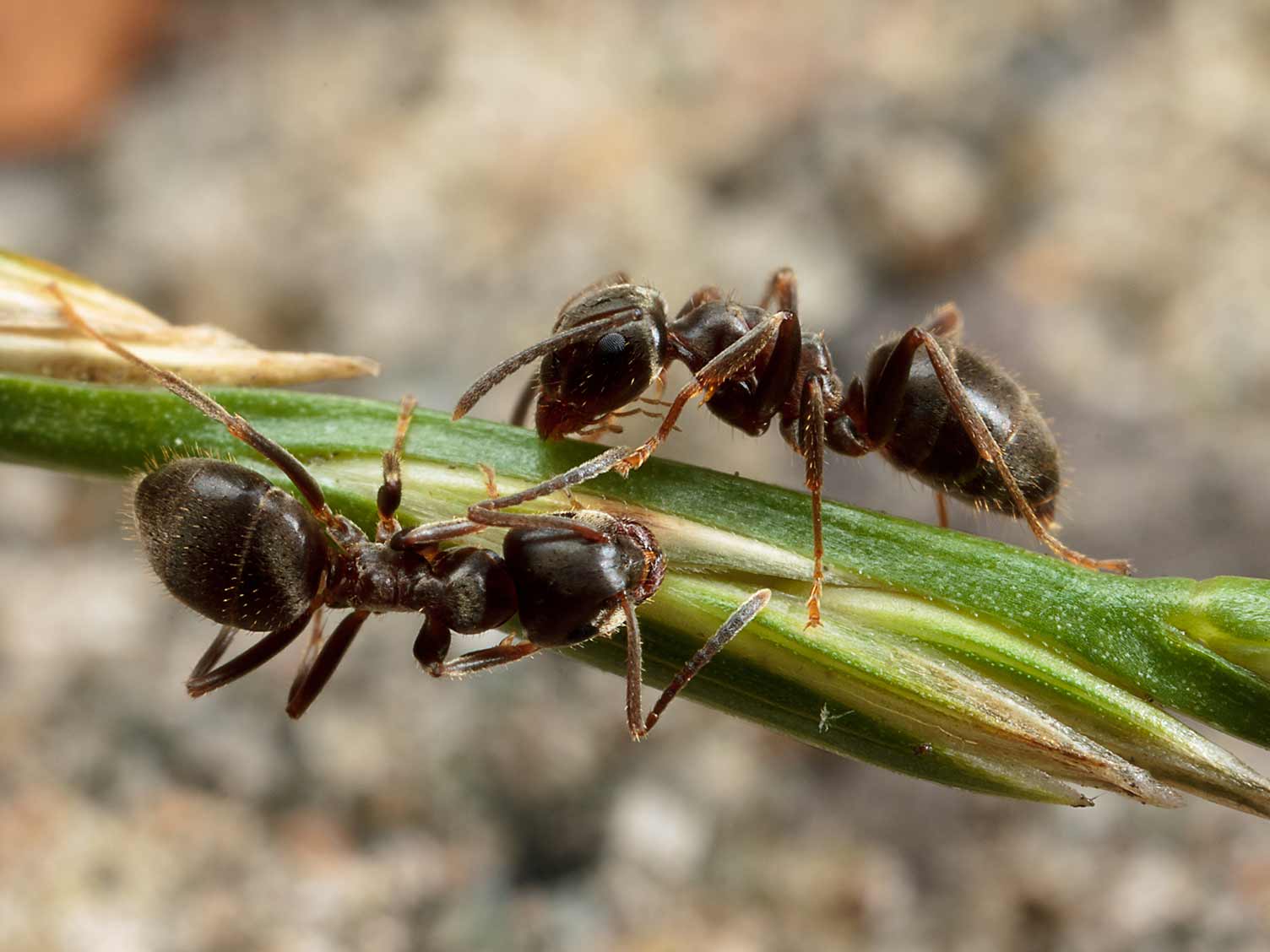 This is perhaps the best known ant due to its tendency to enter houses, it's nests can be found on patios, along the edges of lawns and in fact almost anywhere. Lasius niger is a very quick, robust and prolific ant, using formic acid and its jaws as a means of attack/defence. Colonies can grow up to a size of 15,000 workers, though about 4,000 to 7,000 is perhaps the average. They eat insects, nectar, and even the bodies of their own dead or ants from other colonies. They are also very fond of sugary substances. 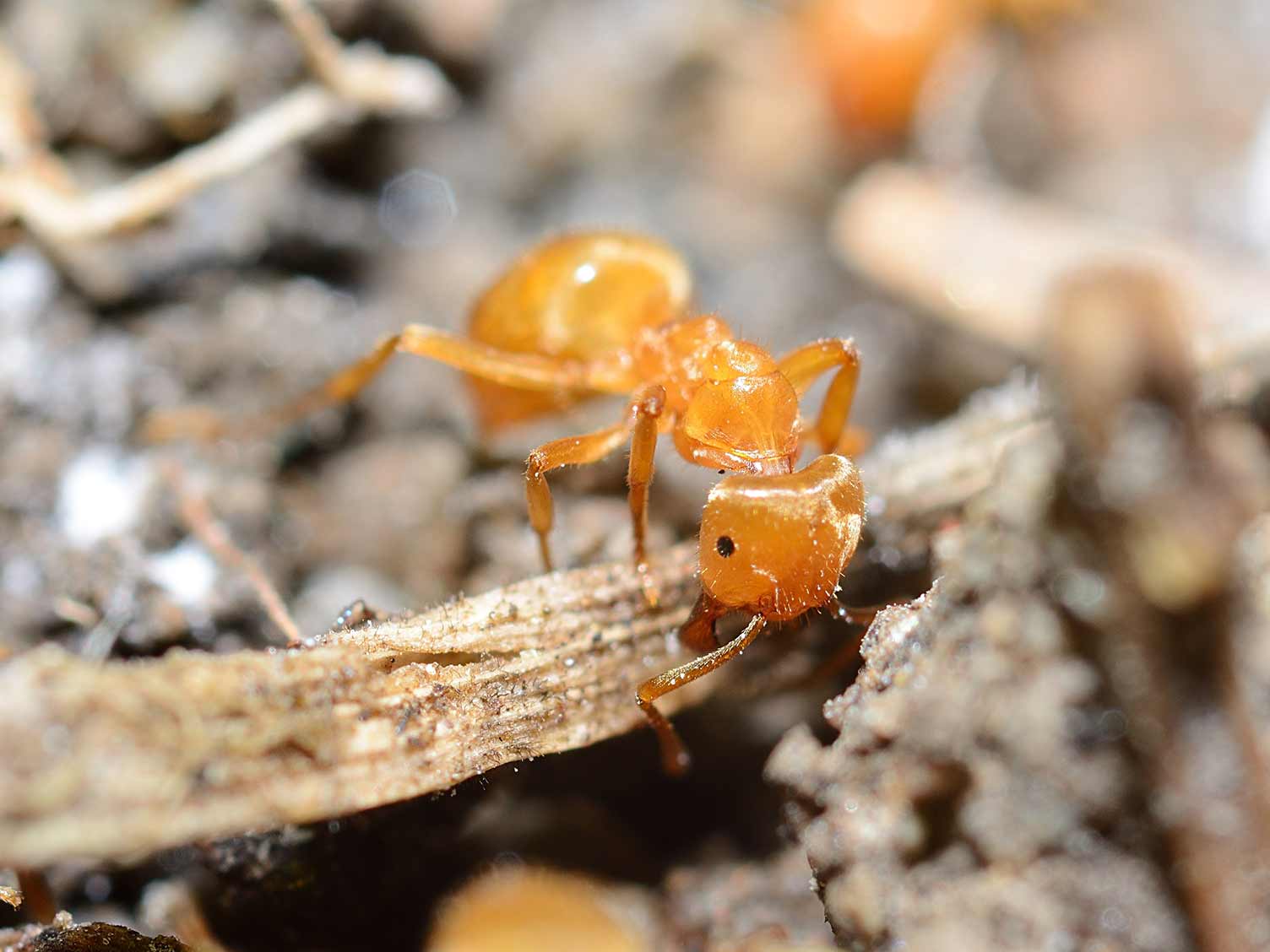 Another common ant found in gardens, these ants build small mounds in our lawns and are often mistaken for red ants due to their yellow-orange colour, yet they are no more harmful than their common black cousins. It is the most skilled nest builder found in the UK and can also be found in fields and meadows, where they build much larger mounds. Lasius flavus tend to forage below ground feeding on small insects and mites that stray into their tunnels, therefore are not often seen, except perhaps when its nest is disturbed, or during the annual mating flights. 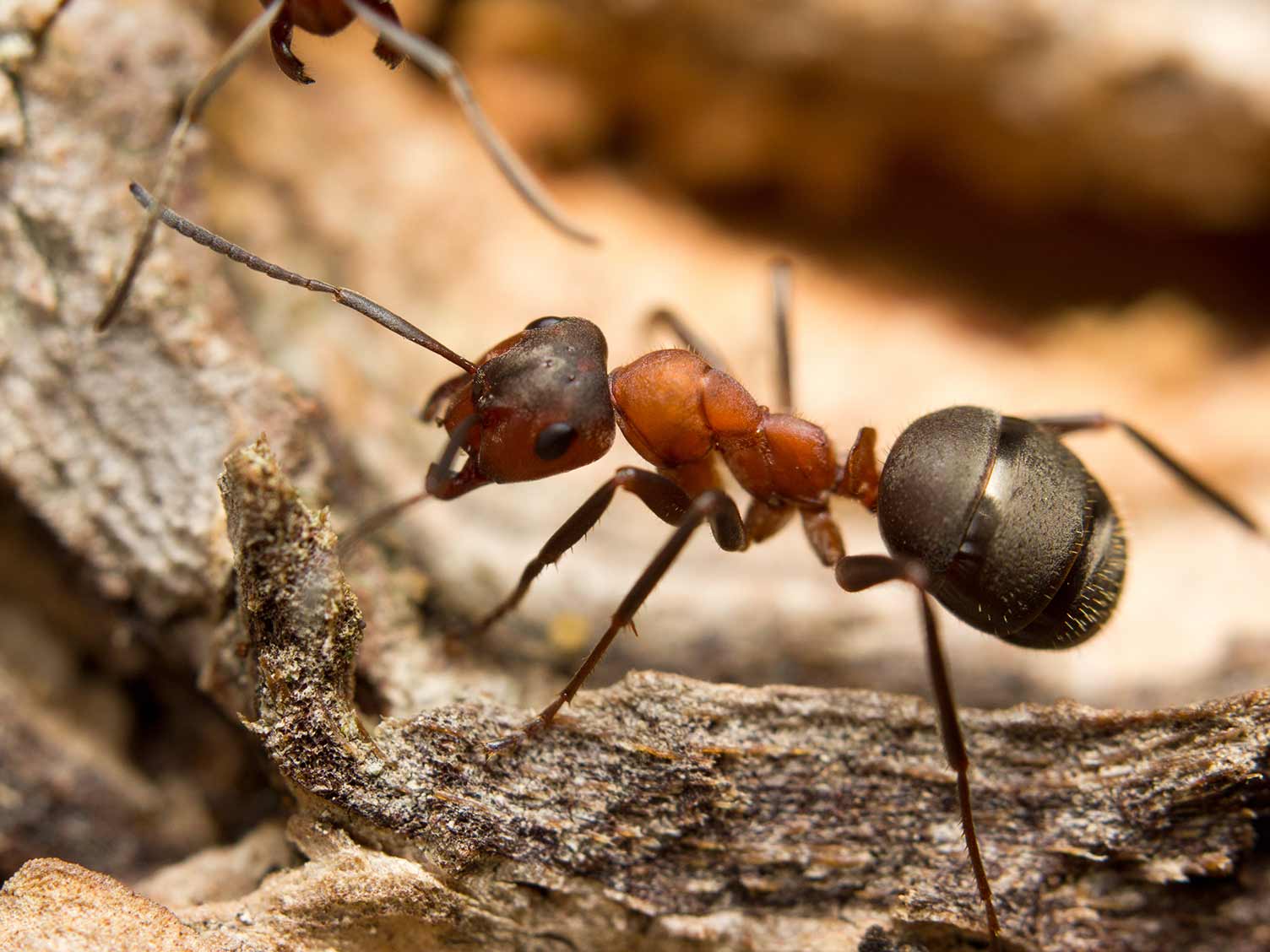 Another common British ant are those belonging to the species Formica, also known as the Wood Ant. Many of these species build huge mounds from pine needles and other woodland litter on the edge of forest clearings or pathways, and can have more than 100,000 members per colony. These ants are large, aggressive, and attack by biting and spraying formic acid very effectively if disturbed.

The largest ant to be found in the UK and is a slave-raider. It raids colonies of other Formica species, such as Formica fusca and steals their brood, taking them back to their own nest where they raise the hatching workers as their own. Surprisingly, these ants generally do not kill the workers of the nests they raid, unless the defending workers try to stop the invader from taking what it wants. Formica rufa are polygynous and can have hundreds of egg laying queens in one nest. 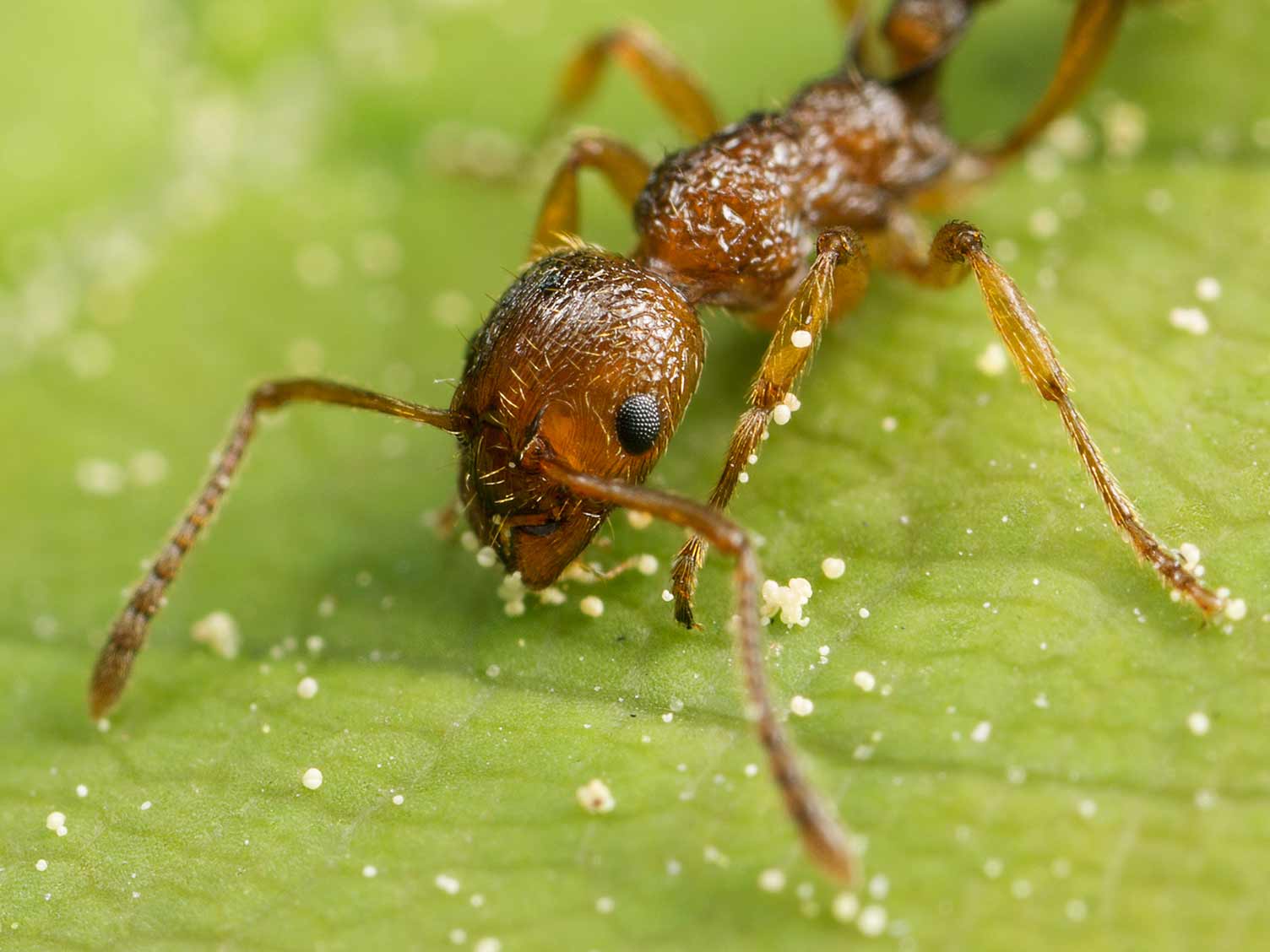 There are seven species of the Myrmica family found in this country. These ants tend to be a deep red in colour and can deliver a relatively painful sting. The most common of the seven species is Myrmica ruginodis which can be found throughout Britain and live in small colonies with between 100-300 members, but can have many egg laying queens in one colony. Myrmica rubra are aggressive and seem to be more happier attacking than running away. 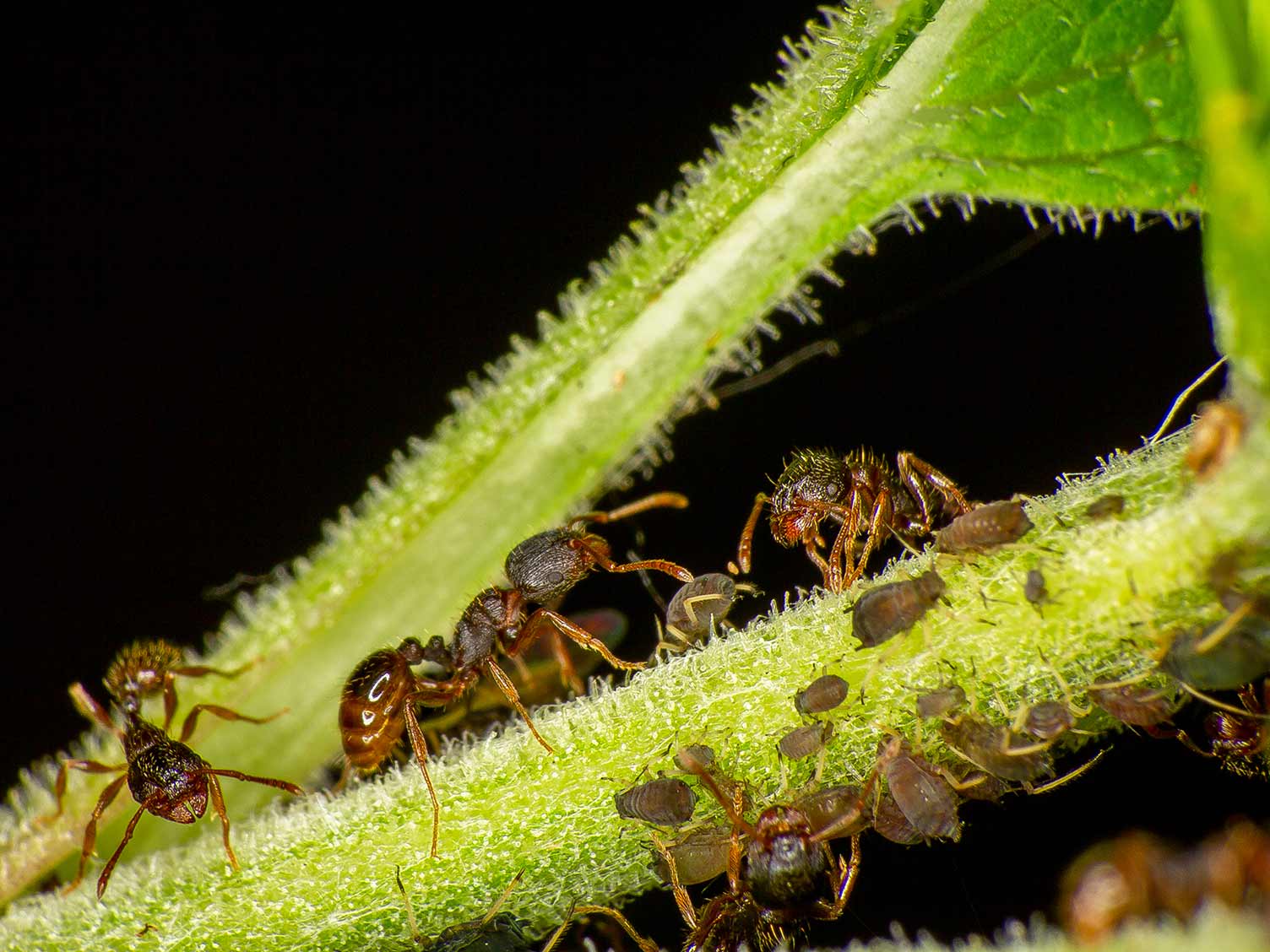 Tetramorium caespitum is a small black stinging ant. They are typically found along the coasts of Southern and Western England. Tetramorium caespitum can have nests containing up to 30,000+ ants, but the average is perhaps around 10,000. Another wood ant species, though black, and very much more timid than its red cousins. They prefer to nest under rotting logs and are found from the Midlands down to Southern England.

Ants live in colonies in a nest. During cool winter months ants are dormant and sleep in the nest, as the weather warms up they become active and leave the nest searching for food. In the summer you may see swarms of flying ants about, these are winged fertile adults, both male and female. After mating the males die and the pregnant females will become the new Queen Ants. They will leave their original nest in search of suitable sites, in which to establish a new nest of their own.

The Queen ant will lay a few eggs in soft soil, which she will then rear herself. These are her first Worker Ants and will help run the nest once mature. Why not take a closer look inside an ant colony!

Who is in the nest?

Each nest must have a Queen Ant to survive. The Queen Ant is much bigger than both the Worker Ants and the Male Ants. Her job is lay as many Eggs as the Worker Ants can manage. Queen Ants have a long life and live for about 10 to 15 years.

The majority of ants in the colony are Worker Ants. Worker Ants are females but they cannot lay eggs. As the name suggests Worker Ants do all the work around the nest. They look after the other ants, eggs and larvae, as well as keep the nest tidy and build new extensions as required. Worker Ants live for about 5 years.

During the summer the Queen Ant lays special eggs that do not hatch into Worker Ants but into Male Ants. At this time she also lays new Queen eggs. Their job is to mate with a new Queen. After which they die. Male Ants have a relatively short life and live for only a few months.

New eggs are laid regularly by the Queen Ant.

There is usually as many of these as there are eggs.

After a few days the eggs hatch into larvae. The larvae are fed by the Worker Ants.

After about 8 days the larvae spins a cocoon around itself. Once in the cocoon it is called a pupa.

3 weeks later, young Ants hatch from the cocoons and are helped out by the Worker Ants. These Ants spend their life gathering food and keeping the nest tidy. Worker Ants live for about 5 years.