How to grow and care for Ceanothus

Ceanothus, or California Lilac, is a beautiful and eye-catching perennial shrub. The vivid and prolific blooms are usually blue, but white and pink varieties are available too. This large bush is easy to grow in the UK – read on for everything you need to know about growing this captivating plant.

Types of Ceanothus to grow

There are over 50 different species of Ceanothus, and many more cultivars. Most are evergreen, all have shiny, slightly sticky leaves, and many have a strong scent too. It’s also widely known as buckbrush and soap bush. 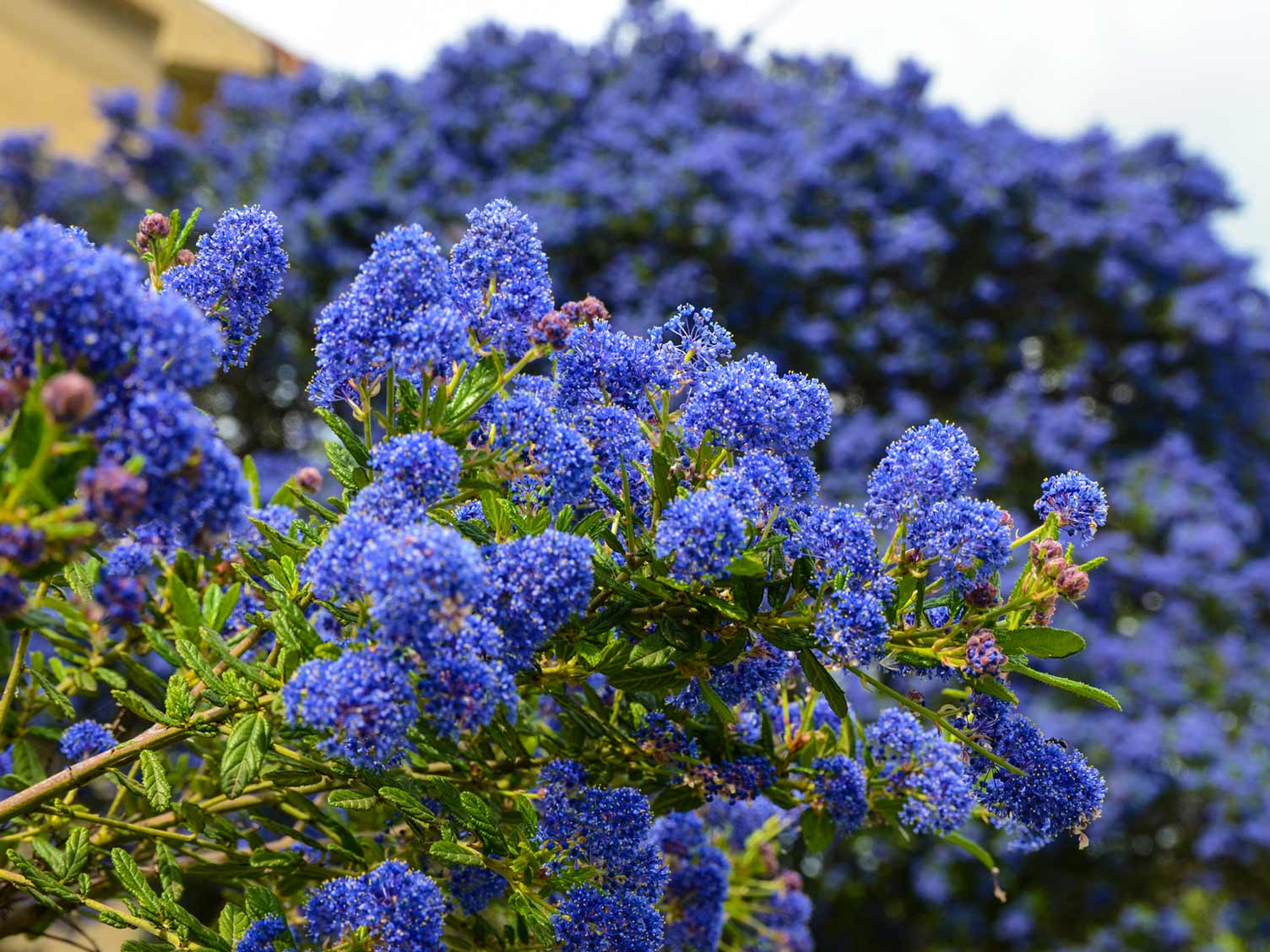 Some of the most interesting Ceanothus plants which we like are:

This wide variety of Ceanothus can be bought from most garden centres and online.

What you’ll need to grow Ceanothus

To grow Ceanothus successfully, you will need:

Wait until the spring to plant out, when the soil is beginning to dry out from the wetter winter months:

Where to plant and place your Ceanothus

Ceanothus can be grown in a variety of styles and locations. Identify a sunny spot in the garden where there is plenty of space for the plant to grow to its full maturity.

Smaller varieties can be grown in a large pot, but they really prefer to grow in the ground. They can be free-standing, grown as a bush in a border, as low-growing ground cover, or are good as an informal hedge. They can also be trained against a south facing wall, or as a climber when tied into supports.

Ceanothus can be propagated from seed, but will need a little perseverance. The seeds need to be soaked in water overnight, and then chilled at 1°C (34°F). They are more easily propagated from semi-ripe or softwood cuttings - see our expert article on how to do this.

Caring and nurturing your Ceanothus

Ceanothus are versatile, being able to survive in a wide range of climates. It is very important that they receive lots of light - full sun will encourage flowering. They enjoy dry conditions, sheltered from strong winds and frost.

Soil should be enriched with manure when planting, and fed annually in the spring, by sprinkling the soil surface with a well balanced slow release fertiliser such as Miracle-Gro® Premium All Purpose Continuous Release Plant Food Tablets.

Water new plants regularly until established. Mature plants should not need watering except in the driest of British summers.

Deadheading is not necessary, but you should prune annually, particularly when trained or used as hedging, to maintain the desired shape. Tie in plants which are being trained or allowed to climb up supports. 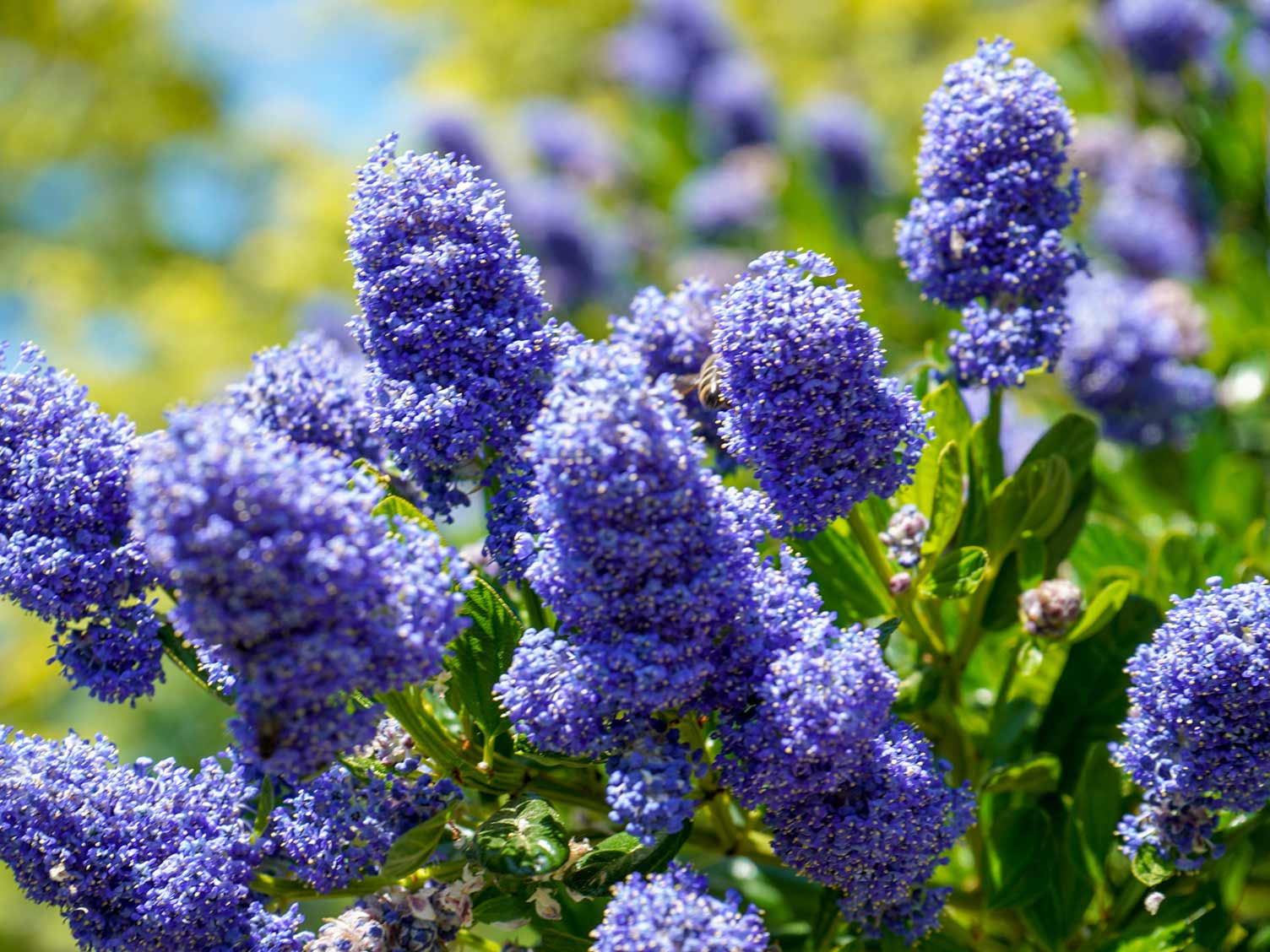 Does Ceanothus grow in shade?

Ceanothus can grow in shade, but will not flower as well as those grown in a sunnier spot. In a sunny location the Ceanothus will flower every year.

Is Ceanothus a climbing plant?

It can be - choose a species which does not spread as much as it grows upwards. Provide supports, and prune and tie-in shoots annually to encourage it to climb.

Why is my Ceanothus going yellow?

This is likely to be due to a lack of nutrients. Feed with Miracle-Gro® Premium All Purpose Continuous Release Plant Food Tablets.

Common pests and diseases with Ceanothus

Ceanothus are largely unaffected by pests and diseases, but there are a couple of troublesome problems to look out for.

What are the shiny brown lumps on the leaves of my Ceanothus?

Scale insects can attack Ceanothus, clinging on to the underside of leaves as they suck sap from the plant. Mature plants will be able to withstand a small number of scale insects, and the population will be controlled by natural predators, such as ladybirds and birds. Encourage these into your garden. Larger infestations of scale insects can be treated with BugClear™ Ultra Gun!

What are the honey coloured fungi growing on the trunk of my Ceanothus?

Honey fungus is a devastating disease which can kill many perennial plants, including Ceanothus. If there is fungus on the woody parts of the plant, and you are sure it is honey fungus, then unfortunately the only treatment is removal and destruction of the affected material. Do not compost any part of the plant. It is hard to prevent and spreads from plant to plant, so be vigilant and act quickly.