How to grow and care for Nerines

Perfect for autumn colour, the brightly coloured Nerine is a great addition to a sun-soaked border. They can also be grown in pots, and used as cut flowers, where the red, pink or white blooms will give a long-lasting and elegant radiance.

Types of Nerine bulbs to grow

There are nearly 30 different species of Nerine plants, but only some of these are available commercially and there only a few that grow well in the UK and only really one variety, Nerine Bowdenii, is fully hardy to be left out all year.

Although only distantly related to lilies, some of the common names for Nerine include Autumn lily, Guernsey lily, Jersey lily, and Spider lily! However, Nerines are not true lilies, but the flowers are quite similar. Like lilies, the trumpet shaped flowers are arranged in a strappy, loose umbrella shape. 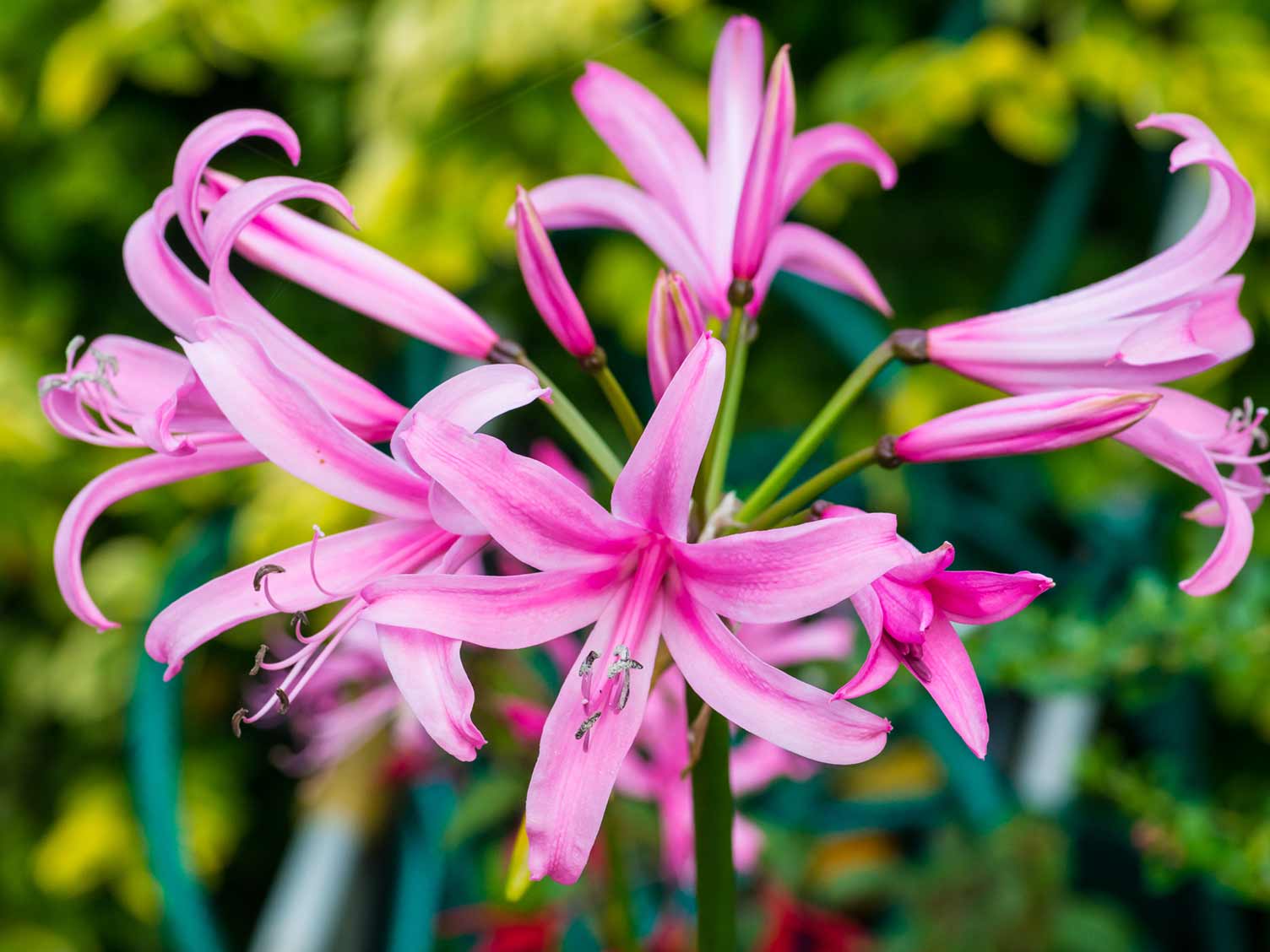 Other species of Nerine which need protection in colder weather include:

There are a number of hybrid species available where a Nerine has been genetically crossed with an Amaryllis. These are known as Amarines, but are a separate genus to the true Nerine.

When to plant Nerine bulbs

How to plant Nerine bulbs in pots

Nerine Bowdenii can be planted straight into a border, and simply covered with 5cm (2") of compost or mulch. We recommend planting other Nerine species in pots. This means that they can easily be moved to a protective environment, such as a conservatory or greenhouse, before cold winter weather arrives.

Nerine bulbs need at least two years before they will begin to produce flowers, so be patient!

Where to plant and place your Nerine bulbs

Nerines are native to countries in Southern Africa and will thrive in similar growing conditions. Make sure it’s hot and sunny, and that they can be protected from frost. Nerine Bowdenii is winter hardy but will flower better if allowed to bake in the sun.

Position the Nerine where it can enjoy full sun and where there is protection from cooling winds. They do not like to be moved, so plant it somewhere it can stay. Gritty well-drained soil is ideal.

Nerines enjoy being crowded with one another, so do not be tempted to thin the bulbs unless dividing to propagate more plants.

Caring and nurturing your Nerine bulbs

Feed Nerine bulbs monthly from January to April with a phosphorous rich fertiliser, such as Levington® Tomorite Organic Concentrate.

Water weekly from mid-summer onwards, and stop when the foliage starts to yellow and die back.

Cut fresh flower stalks from September to November to bring into the home. They are renowned for being long lasting, so expect to enjoy them for up to a couple of weeks.

Deadhead to remove old flowers throughout the autumn. Prune once flowering has finished, usually in December, by removing dead foliage.

Propagate by dividing every 2-3 years. Dig up a plant in the summer, and break the clump into smaller sections, and replant into new pots. Do not do this any more frequently as Nerines do not like their soil to be disturbed. Nerine bulbs can be bought from the shop later in the summer and should be planted straight away.

Nerines can cause a minor stomach upset if ingested, so always wear gloves when handling, and wash your hands after touching them.

Why is my Nerine not flowering?

Nerine bulbs need at least two years to develop enough to be able to produce flowers, so do not expect them to produce much colour at first. If the Nerine is more mature, it may be that it is not receiving enough direct sunlight.

Why is my Nerine producing lots of green growth, but no flowers?

A mature Nerine may grow lots of lush greenery if the soil is too rich. Nerines enjoy quite poor soil, so do not over-feed them.

Nerine bowdenii will withstand frosts, but all other species of Nerine are frost tender, and not hardy.

Nerines are largely unaffected by pests and diseases. The main pest to look out for are Mealybugs on indoor-grown species, which can cause stunted growth and look rather unsightly. Look out for fluffy white lumps, sticky patches and black sooty mould on the leaves.

Isolate the plant so that it does not spread, remove and destroy affected parts of the plant. For persistent infestations, spray using the BugClear™ Ultra Gun!