Fuchsias are one of the mainstays of the summer garden. They produce masses of delightful pendant, bell-like flowers for months on end from early June to the first severe frosts of autumn.

Fuchsias provide colourful displays in beds and borders, hanging baskets and all manner of containers. Hardy fuchsias can even be used to make informal flowering hedges. They are so popular that fuchsias have their own national society “The British Fuchsia Society” and numerous local clubs and societies.

How to grow fuchsias

Fuchsias will grow perfectly well in either full sun or partial shade with shelter from cold winds, although they will appreciate some shade at the hottest part of the day during very hot summers. To flower profusely they need a fertile, moist but well-drained soil.

There are literally hundreds of varieties of fuchsias in a wealth of different colours and colour combinations. Most produce relatively small flowers, whereas the ’Turbo’ varieties produce quite large flowers.

They range from small, simple, single-petalled varieties all the way up to those that are multi-petalled and large enough to sit in the palm of your hand.

Trailing or basket fuchsias produce long, trailing stems, making them perfect for hanging baskets and adorning the edges of containers.

Both bush and hanging fuchsias are regarded as being half-hardy perennials. That means they won’t survive temperatures below 4-5C (40-41F) and need overwintering in frost-free conditions if you want to keep them for subsequent years.

Hardy fuchsias are bushy varieties that are generally regarded as being frost tolerant and can be left out in the garden all year round. The boundaries between hardy and non-hardy are somewhat blurred and varieties that are hardy in mild climates such as in Cornwall may not be hardy in more exposed, colder regions of the country. 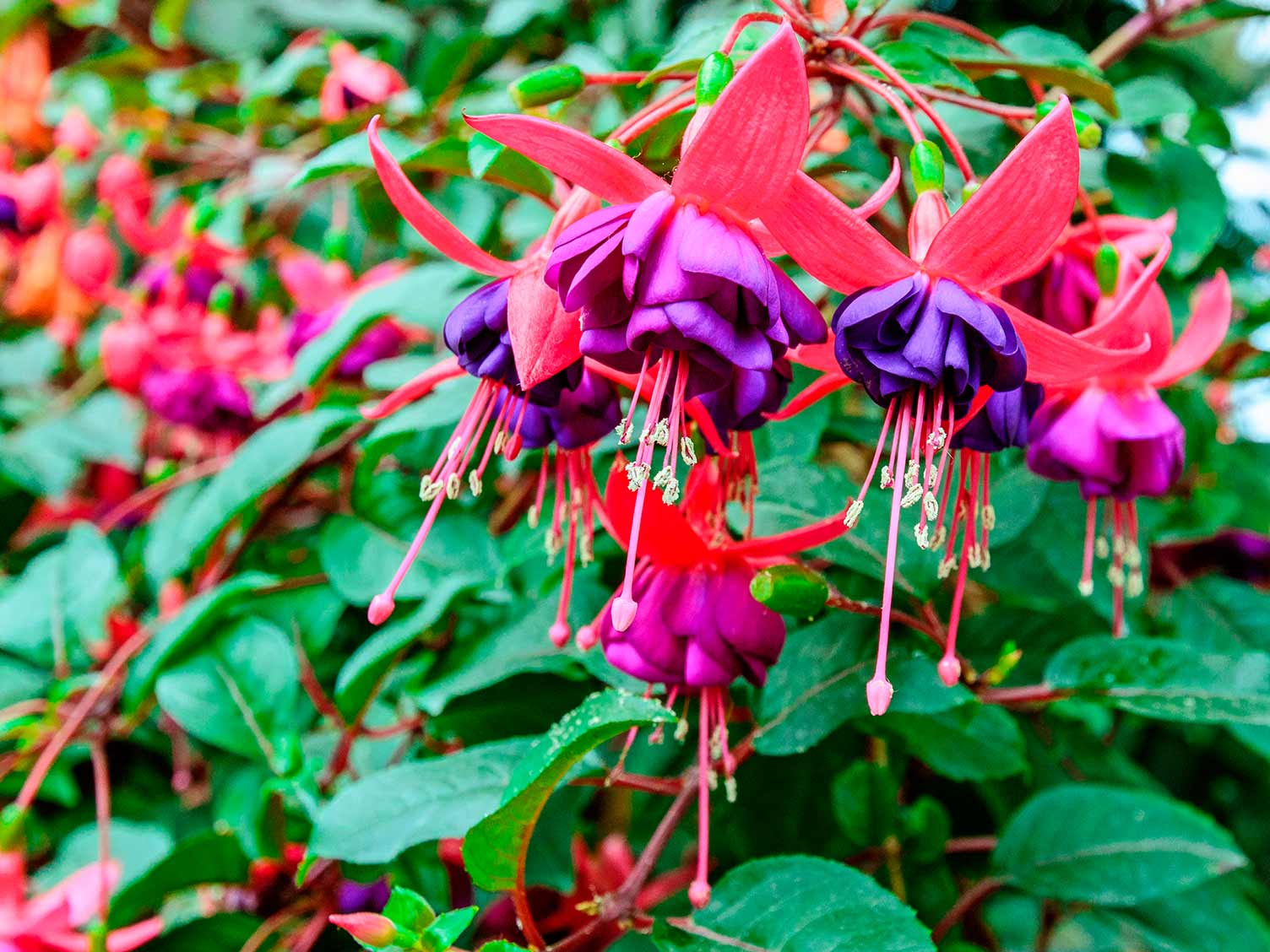 Half-hardy varieties are planted out in May/June after the danger of frost has passed. Hardy species should be planted in spring or early summer.

Dig a good sized planting hole big enough to easily fit the rootball. Add a layer of organic matter such as compost or planting compost  to the base of the hole and fork it in.

Place the rootball in the planting hole and adjust the planting depth so that it is at the same depth as it was originally growing (except hardy fuchsias) and the top of the roots are level with the soil surface. Plant hardy fuchsias slightly deeper, with 2.5-5cm (1-2in) of the stems below soil level.

Mix in more organic matter with the excavated soil and fill in the planting hole. Water in well, apply a granular general feed over the soil around the plant and add a 5-7.5cm (2-3in) deep mulch of well-rotted garden compost or bark chippings around the root area.

Flower borders and beds, patios, containers, city and courtyard gardens, cottage and informal gardens. There are types of Fuschia for most locations.

How to care for fuchsias

Fuchsias growing in the ground will probably need a thorough watering once a week when they are established, especially during prolonged dry periods.

In containers they will need watering regularly, especially in summer, to keep the compost evenly moist but not waterlogged. Do not allow the plants to sit in water.

Feed hardy fuchsias each spring and again in summer with a general granular plant food.

To keep plants flowering profusely, deadhead them regularly to remove faded flowers and the developing seed pod behind them.

The stems of hardy fuchsias should be cut down to just above ground level in late spring, preferably just as new growth is seen.

Pinch out the shoot tips of young bush/trailing fuchsias to make bushier plants that will flower more profusely. The tips of resulting sideshoots can also be pinched out if necessary, but excessive pinching out will delay flowering.

Half-hardy bush and trailing fuchsias should be lifted from the ground in autumn, before temperatures drop below 5C (41F), and overwintered in a frost-free place.

First tidy them up by removing dead, dying, damaged or diseased growth and cut them back by around half if necessary to keep them compact. Then pot them in pots just big enough to accommodate their roots with some extra potting compost around them. Put them in a cool greenhouse, conservatory or similar well-lit place. They can also be overwintered in a frost-free shed or garage, providing they have become dormant and dropped all their leaves.

Standard fuchsia (grown on a single stem) should always be overwintered frost-free, as the main stem is prone to cold damage even if the variety is regarded as being hardy.

Hardy fuchsias can be kept in the garden overwinter but may need some protection to ensure they come through unscathed, particularly in cold regions and severe winters.

Protect the roots and the crown by applying a thick mulch of bark, compost or even straw around the plants in autumn. Don’t cut down the stems until spring when new growth begins.

Hardy fuchsias growing in containers may be prone to frost damage even in reasonably mild winters, so protect the container to prevent the compost and roots freezing solid.

The common foxglove, Digitalis purpurea, is a common wild plant growing in woods and hedgerows.

Some of the most attractive summer sights are containers and hanging baskets overflowing with, bright, beautiful bedding...

A beginners guide to hanging baskets

Hanging baskets are great for small spaces and a brilliant way to add colour to otherwise drab walls and fences. They...

What to plant in autumn and winter containers

If your patio looks a little drab and uninteresting after a colourful summer, then plant up your containers with late...