There are numerous plants that have lily in their name - lily of the valley, plantain lily, arum lily, canna lily - to name but a few. But the true lilies, with their large trumpets producing a kaleidoscope of colour in summer often with spicy and exotic scents, are species and vareties of Lilium.

Being a bulb, true lilies are easy to grow and reliably flower year after year for many years with very little attention.

True lilies vary in height from dwarf species, suitable for the front of borders and rock gardens, to tall varieties - including tree lilies - perfect for the back of borders. The colour range of the flowers is very wide, from white to deep purple.

How to grow lilies

Lilies prefer a position that gets some sun, but will grow well in sites that are in light shade for just part of the day. They need well-drained, moisture-retentive soil, so add lots of organic matter when planting. In heavy clay soils, plant the bulbs on a layer of course sand or gravel to improve drainage.

There are several different types of true lilies. The following are the most popular: 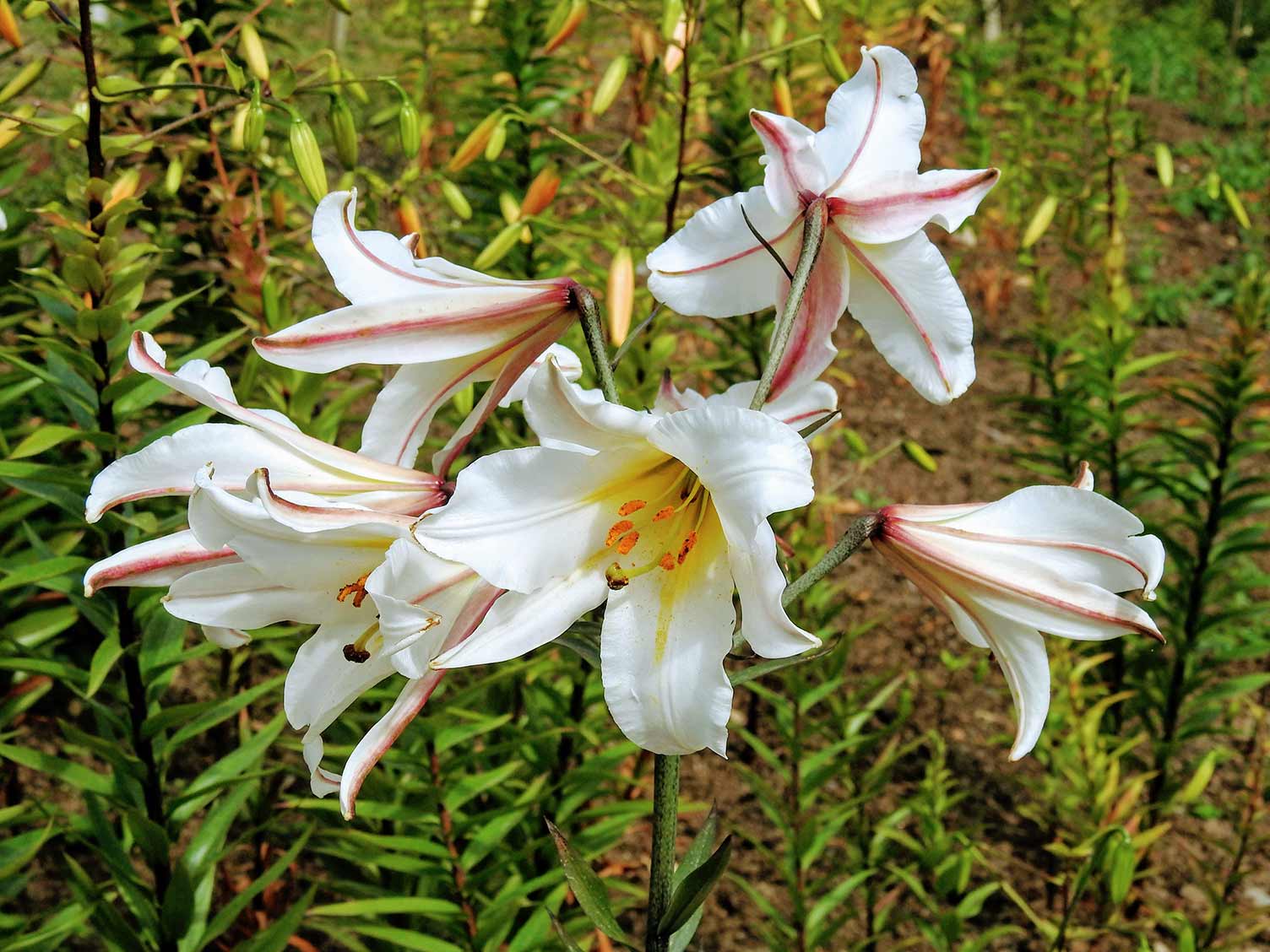 Lily bulbs can be planted in autumn or in spring.

The planting depth depends on the type, as lilies can either be stem rooting or basal rooting; the former produce roots above the bulb as well as below, so need deeper planting. Generally, plant stem-rooting lilies 15-20cm (6-8in) deep and basal-rooting types 5-7.5cm (2-3in) deep.

As the bulbs like cool conditions, it’s a good idea to shade the base of the stems, such as by growing low-growing plants in front of them.

Most lilies are perfect for growing in containers – but the Asiatic, Oriental and Trumpet hybrids are particularly suitable for pot growing. Space the bulbs evenly, with at least 2.5-5cm (1-2in) between them. Use John Innes No 3 Compost. The bulbs can remain in the containers for several years, before they need removing and replanting.

How to care for lilies

Apply a 5-7.5cm (2-3in) mulch over the soil after planting, and top it up annually. Lilies growing in the ground may not need watering at all, but check during prolonged dry periods in summer. Those in containers will need regular watering whenever needed in spring and summer.

Feed with a slow or controlled-release feed in spring and apply liquid feeds through the growing season – especially when they’re in flower.

Although most lilies produce stout stems that can tolerate strong winds, it pays to stake those growing taller than 90cm (3ft) wherever wind is a problem.

When the flowers have faded, remove them and developing seed pods. Keep the plants growing strongly after they have finished flowering – a weekly liquid feed is beneficial – so that the bulbs build up plenty of energy for flowering the following year. Don’t remove the flower stems and foliage until they die down in autumn, when they should be cut down to ground level.

Nearly all types are perfectly hardy and can remain in the ground throughout winter.

After several years growing in the same place, lift and divide them and separate out the young bulbils.