A guide to protecting plants in winter

One of the great benefits of the British climate is that it allows us to grow such a wide range of plants. Most of these are not native and many come from some very exotic places but still thrive here. While some are very hardy and survive perfectly fine outside in the garden in a typical Winter, some aren’t and will need a bit of protection.

Exactly how many precautions you need to take will depend on how cold it gets that Winter and where you live. In very mild and coastal areas, even the most cold-susceptible plants can make it through even quite severe Winters.

The vast majority of our Summer bedding plants won’t tolerate anything past the first severe frost of Autumn; you'll see your annuals simply curl up their leaves and die.

Perennials, that grow year on year, will survive if you can bring them into a frost-free, well-lit place, such as a greenhouse – ideally heated to be frost free – a conservatory, a windowsill in a cool room or even a shed or garage as long as it has windows; these plants will be in leaf over Winter, so they'll need a source of natural light.

These perennials will need lifting from where they’re growing and potting up first. Carefully dig them up, limiting the damage to their rootballs, and tidy them up by removing all dead or diseased growth and faded flowers, and cut them back by around half to remove any weak growth and make them look a bit bushier. Then pot them up in pots just big enough to accommodate their rootballs and a little fresh compost at the base of the pot and around their sides. Give the compost a light watering to settle it and the roots. Then place them in their new Winter home; ideally this should have a temperature of 4-5C, but no higher than 10-12°C.

Depending on the type, they won't need much watering over winter – just enough to keep the compost a little moist.

Some of the perennial summer bedding plants you can treat in this way:

There are some plants that are referred to as 'borderline hardy'. This means they’ll survive OK outside in a mild winter, but might struggle in a severe one. These can be given a bit of help to get them through the cold by putting a 7.5-10cm thick mulch of organic material, such as home-made garden compost or bark, on the soil where their roots are. Just make sure that the mulch is kept clear of any stems. This will protect their roots, which is the part of the plant most likely to suffer from cold damage. Resist cutting back any of their stems, no matter how untidy they look, until they start to come into growth again in Spring.

You can also ‘toughen them up’ ready for the Winter by feeding them in September with plant food that’s high in potassium.

Plants you can treat in this way include:

While these plants may come through mild Winters unscathed, because they’re quite pricy to replace, it’s not worth the risk in harsher Winters.

For banana plants and tree ferns, start by cutting off the leaves and then wrap the whole trunk with horticultural fleece, making sure there are no exposed gaps. Then tie the fleece in place, tightly enough that the fleece stays in place but not enough to damage the trunk. A layer of hessian wrapped around the fleece and securely tied will offer more protection.

Before wrapping tree ferns, pack the hollow at the top of the trunk with something like straw to keep the cold out.

For cordylines, move your hands slowly up the trunk to collect all the leaves in an upright position. Tie them together with string before wrapping the trunk and leaves with the fleece.

Wherever possible, remove these protective layers during prolonged mild periods of weather. 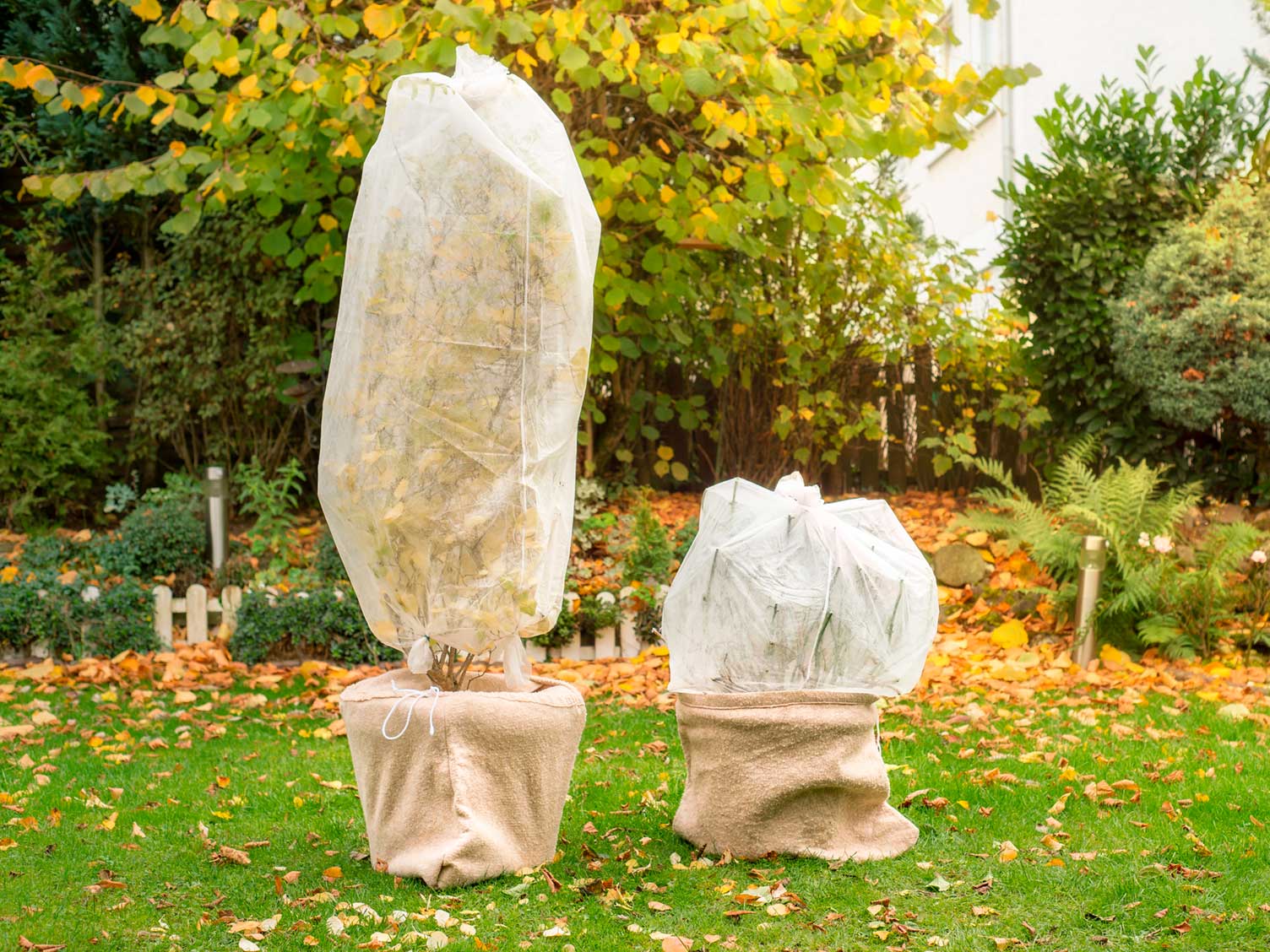 All plants growing in containers, even otherwise hardy ones, are more prone to cold winter damage. That’s because their roots being above ground are not protected by the surrounding insulating soil and can easily freeze solid and die.

Protect the containers from severe weather by wrapping them in bubble wrap, hessian or, better still, make pot ‘duvets’ from thick plastic bags filled with shredded newspaper, polystyrene chips, roofing insulation or similar materials and tie these around the pots.

If possible, move the containers against a sheltered, south-facing wall or close to a building to provide extra protection. Raise the containers onto pot feet or bricks to avoid them sitting in the wet, which can lead to root rotting and terracotta pots cracking.

Growing tender and half-hardy plants in containers does provide the opportunity to move the containers more easily into a frost-free place over winter, rather than having to dig them up.

Some gardeners always leave summer plants in the garden over winter. While this can be OK in a very mild winter, it is taking a risk if an average or severe winter occurs.

Others will leave dahlias and canna lilies in the garden, often with a thick mulch on top of the dormant roots. This can also be a bit of a risk, as frost is likely to penetrate deeply into the soil if it gets very cold and kill their overwintering tubers and rhizomes. And even if they survive, cannas particularly will often come into growth quite late the following year and produce a disappointing or no display of flowers.

It’s a better choice to dig them up once they’ve been subject to the first autumn frost and keep them somewhere frost free. Being dormant tubers and rhizomes, they won’t need any light and only minimal watering. 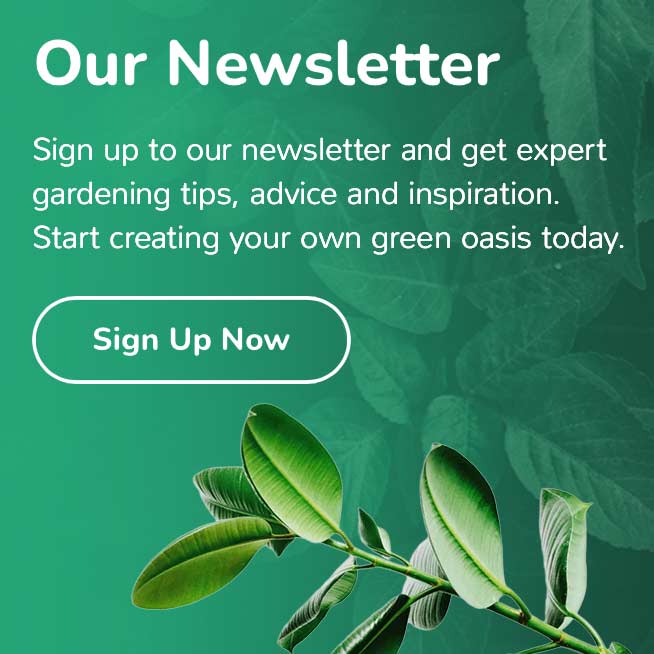 How to prepare your lawn for winter

Your lawn should not be neglected between October and March!

Even in the middle of winter there are still a few brave plants in flower, brightening up cold dark days with colour and...

Protecting your lawn for winter

Lawn care isn’t just a spring and summer job. It’s important to keep it in good shape so it’s prepared for the cooler...

Getting your garden ready for winter

Here are just a few winter garden activities to get you started.

Even in the middle of winter there are still a few brave plants in flower, brightening up cold dark days with colour and...

What to plant in autumn and winter containers

If your patio looks a little drab and uninteresting after a colourful summer, then plant up your containers with late...