Tarragon isn’t a widely grown herb at home, but it is well worth it especially if you like French cuisine, for which it is a popular and traditional ingredient. It is particularly used to enhance the flavour of fish and chicken dishes and much prized for its aniseed-like flavour.

Tarragon is a perennial, and one plant will give you masses of leaves to pick over several years.

How to grow tarragon

Tarragon needs a sunny, warm and sheltered position to do well and produce strongly flavoured leaves.

French tarragon especially needs a well-drained soil, and grows particularly well in light, sandy soils that are low in nutrients. It hates wet conditions, and if the soil is too rich it can become straggly and more prone to dying off.

Russian tarragon isn't so fussy, but still doesn't like wet soil. Tarragon does better in neutral to alkaline soils; it doesn't grow well in acidic soils.

Like mint, tarragon spreads by underground runners, but is much less vigorous than mint and unlikely to be a problem. Growing it in a pot in a sunny position will prevent it from running, as well as providing good growing conditions. 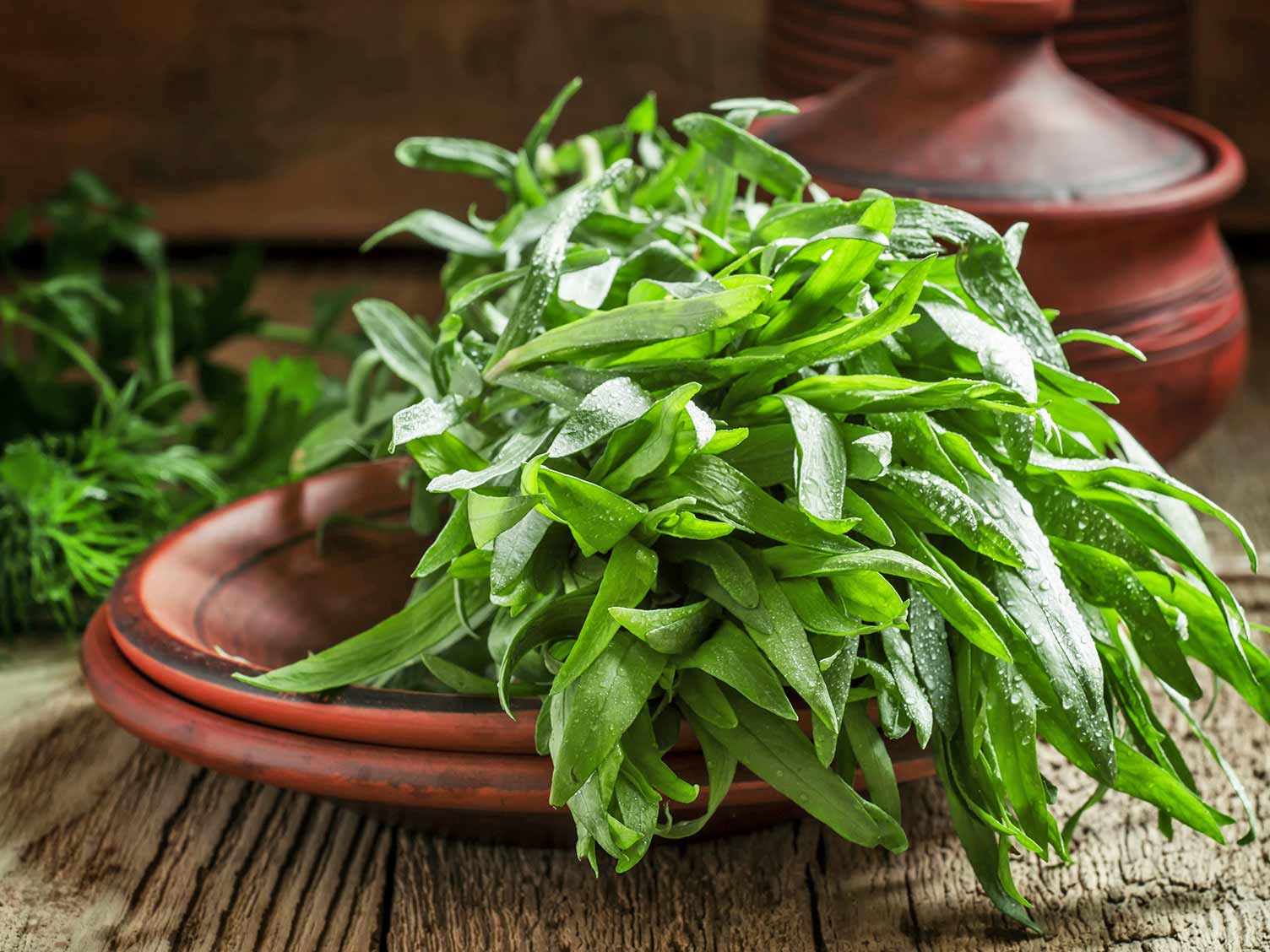 Sow Russian tarragon seeds from April to May in small pots of a good seed compost. Do not cover the seeds. Place in a propagator at a temperature of 15-20°C (60-70°F).

When seedlings are large enough to handle, transplant individually into small pots and grow them on in cooler conditions – around 10°C (50°F) – until large enough to plant outside after the risk of frost has passed, after hardening off – acclimatise them to outdoor conditions – for 7 to 10 days. Plant out at a distance of 45cm (18in) apart.

French tarragon does not set seed, and rarely flowers, so you will have to buy and plant young plants in spring.

Dig over the soil and incorporate lots of bulky organic matter, such as compost, especially if the soil is heavy clay to improve the drainage.

Place in the planting hole and adjust the planting depth so that it is planted at the same depth as it was originally growing and the top of the rootball is level with the soil surface.

Mix in more organic matter with the excavated soil and fill in the planting hole. Water in well and apply a light dressing of a granular general feed over the soil.

Tarragon plants, particularly French tarragon, are not particularly long lived. They should remain productive for at least 3 or 4 years, but will eventually need replacing.

How to care for tarragon

Plants in the ground are unlikely to need much if any watering in summer, but watering may be needed on very light, quick draining soils during prolonged dry periods.

Give plants one or two light feeds with a liquid plant food during the summer.

Remove any flowers that may appear for a constant supply of flavoursome leaves.

Plants will die down to ground level in winter. French tarragon is not completely cold hardy and may need winter protection by covering plants with a cloche, fleece or straw. If growing in containers, move to a sheltered position – even a shed or garage – when the plant has died down during the winter months.

Leaves can be harvested at any time from May until September/October whenever leaves are needed, using scissors or secateurs to cut the stems. Young leaves have a better, stronger flavour than old ones.

For winter use, you can either dry or freeze the leaves. Freezing is the best option using leaves picked in mid-summer.

You can also pick young sprigs and add them to a bottle of white wine vinegar to make tarragon vinegar.

Sage is a very popular shrub, mainly grown for its leaves, which are strongly scented.

Thyme has many uses in cooking and elsewhere in the kitchen.

Saffron is, weight for weight, one of the world’s most expensive spices.

Both marjoram and oregano are versatile and essential herbs that good cooks will always have to hand.