Potatoes (Solanum tuberosum) are tubers that grow and form at the plant’s roots. The plant also produces flowering shoots that appear above ground. These edible tubers that we know and love are an important carbohydrate and rich in potassium. They make a versatile ingredient, eaten both hot and cold and prepared in a variety of ways, from chips to crisps and much more. Luckily, it’s easy to grow potatoes at home, both in containers and the ground, and just a few plants has the potential to provide large harvests.

The texture of cooked potatoes varies between waxy and floury, and some are best for boiling, others for roasting and even more for chips. For example ‘Red Duke of York’ isn't great boiled, as it falls apart, but for roast potatoes or mashed there it's absolutely delicious. For examples of the varieties available check out the table below:

When to plant potatoes

When you buy your seed potatoes, take some time to research the variety name and what kind of potato they are, as different varieties are suitable for different cooking methods. Generally, young potatoes are better for boiling and salads, as they contain less starch and so don’t break down as quickly, while larger potatoes are best suited to mashing and baking.

In the UK, potatoes are categorised into three groups: first-earlies, second-earlies and maincrop. These groups indicate when to plant potatoes and when to harvest potatoes, although these times can differ depending on your last local frost dates.

Here’s what you’ll need to get started growing potatoes:

How to plant potatoes

Rather than use old sprouting potatoes from the back of your cupboard, it is recommended to buy certified seed potatoes, as they will be disease-free. Seed potatoes are available from late winter to spring. If you purchase them prior to planting, you can give them a head start by allowing them to chit.

The process of chitting involves leaving seed potatoes in a cool, light, and frost-free place to sprout. Take care when handling sprouting potatoes, as the sprouts are fragile and can break off. If you don’t have time to chit the potatoes before planting, they should still sprout underground but it may take a bit longer for the shoots to appear.

Planting potatoes in the ground

If your soil is a heavy clay, or you are short of space, you might have more success growing potatoes in raised beds, or containers. While you can grow maincrop potatoes in containers, the restricted room for tubers to form may mean it is preferable to select first- or second-early varieties, as they have smaller tubers.

While in active growth, keep the plants well-watered, especially during dry spells, and continue to feed for higher yields. Flowers are a sign that potato tubers are forming in the soil.

You will also need to ‘earth up’ or mound the soil around the base of the plants as they continue to grow. This helps to keep the plant roots cool and protects tubers forming near the soil surface from exposure to the sun, where they run the risk of turning green and poisonous.

Potato shoots are tender, so if shoots appear during forecasted frosts, you can protect them with cloches or horticultural fleecing. This is another benefit to growing potatoes in containers, as you can easily move the containers undercover if there is a risk of frost.

Potatoes will grow in almost any soil, however, they cultivate much better if the soil is enriched with heaps of organic matter. Potatoes grow best in an acid soil so add well-rotted manure and garden compost. It is also important that you do not lime soil at any time.

How to grow potatoes in your garden

After chitting your potatoes, take five or so tubers and plant into your bag specifically designed for growing potatoes, around 10-12 centimetres deep, with the shoots facing upwards. Add more compost into the bag until each tuber is covered with a gap of around 5 centimetres to the top of the bag.

An application of a high potash fertiliser at the rate suggested on the pack will increase yields. Avoid fertilisers high in nitrogen as these will delay maturity of the crop.

First early potatoes arrive around June/July time, when the leaves have fully matured and opened. Second earlies and salad can be harvested and eaten at the same time of year.

For main-crop potatoes, look to store your potatoes in a hessian bag in a cool, dry environment. The potatoes will be ready to harvest once there is a yellow colouring on the stems and leaves. Then remove the stems and harvest 7 days later in full.

For plenty of small ‘new’ potatoes ready to eat in July, plant a variety known as ‘early’. For a large crop of big tubers that will be ready in September and can be stored for months, go for a ‘maincrop’.

By buying seed potatoes, you are able to begin growing them before planting them in January/February time. Seed potatoes are actually small tubers specifically grown for the purpose. Remember, always buy certified seed potatoes - this way you will then know they are free from virus infections.

Seed potatoes are normally available in the first few months of the year, well before they can be planted outside. 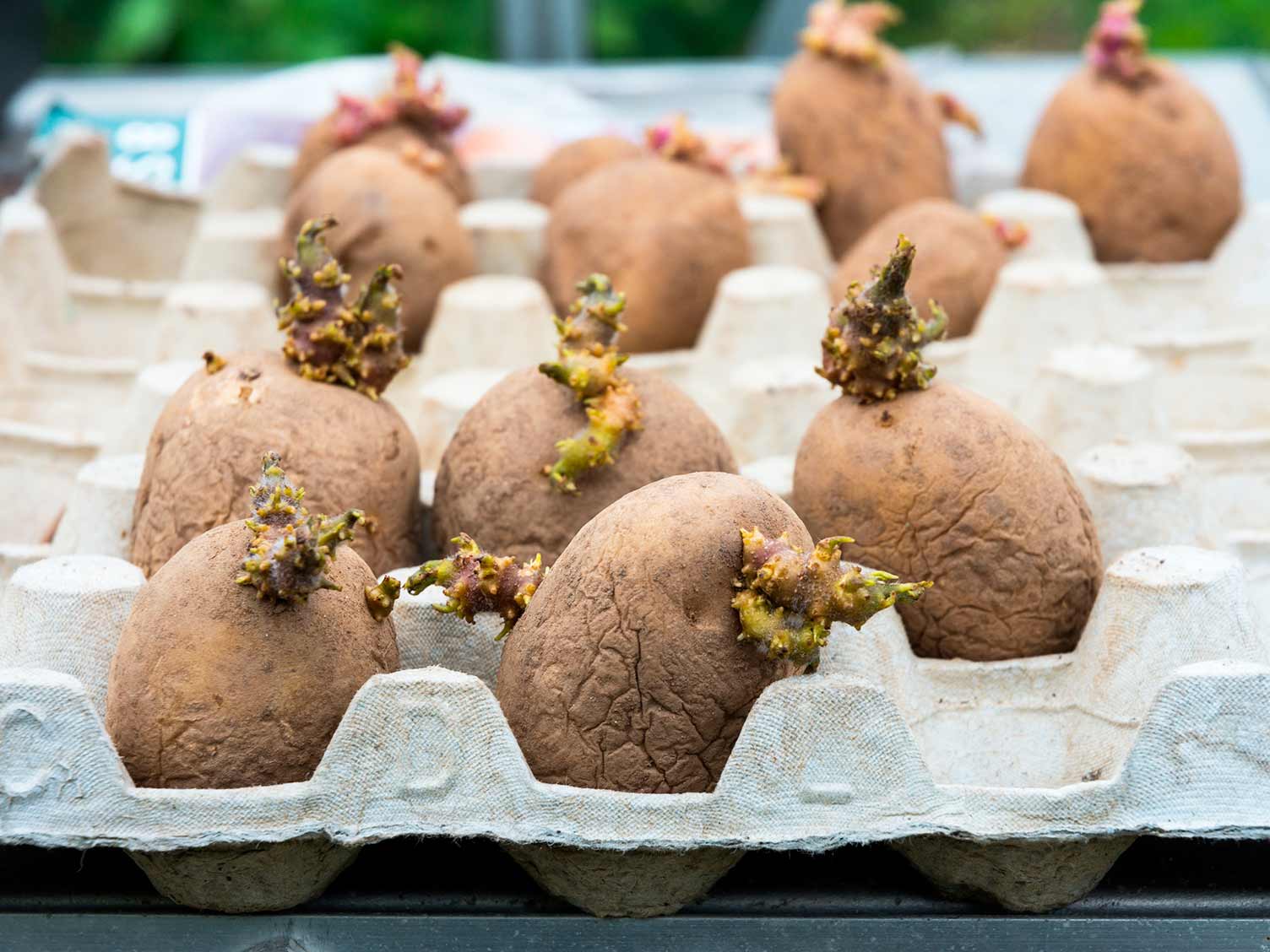 To get them growing when you buy them, place them in egg boxes or a seed tray, with the end with most eyes or buds facing upwards. Stand them somewhere that is cool, but frost-free, and in good light. The aim is to produce small, sturdy, green shoots. To get the biggest crops it’s important to ‘chit’ your seed before planting. Chitting is said to improve yields, but probably is used only to gain a few weeks in the time needed for growing earlies in the ground and to provide the right conditions for storage.

Keep adding the compost until the container is full, as the stems begin to grow. Remember, newly emerging foliage is susceptible to damaging frost – avoid this by earthing up with the surrounding soil or by covering the shoots with a fleece.

The tubers are ready to plant when the shoots are about 2.5cm (1 in) long. In late March or April dig a trench 15cm (6in) deep and plant the potatoes. Carefully push your seed potato (with the shoots facing upwards) into the loosened compost leaving a gap of 30cm (12in) between each one. Take care not to damage the shoots as you plant the seeds and ensure the potatoes are evenly spaced and not touching each other. Leave a space of 60cm (2ft) between rows. Fill the trench with soil mixed with garden compost, or other organic matter, for harvesting from the end of June.

When the green shoots have grown to 20-30cm (8in-1ft) tall pull some extra soil around the stems to make a ridge. This soil is to exclude light from the potatoes that are forming on the surface. Water in dry weather. A liquid feed every fortnight of a general fertiliser can help grow yield.

How to harvest potatoes

Dig up the whole plant with a fork or spade, taking care not to spear any potatoes in the process. Some potatoes will fall away easily, while others can be gently detached from the plants’ roots.

After harvest, you can leave the potatoes somewhere dry to cure, giving soil left on the potatoes a chance to dry up, which makes cleaning easier. When selecting which potatoes to eat and which to store, test the skin with a finger. Those with skin which tears easily when pressed should be used quickly, while those with a firmer skin can be stored. Store somewhere dark, cool, and well ventilated, such as a paper bag or burlap sack.

There’s nothing quite like growing, cooking, and eating your own potatoes. Just think of the culinary possibilities.

Looking for specialised gardening advice? Or just hunting for a specific product? Visit your local store and get help from dedicated staff.
Use my current location